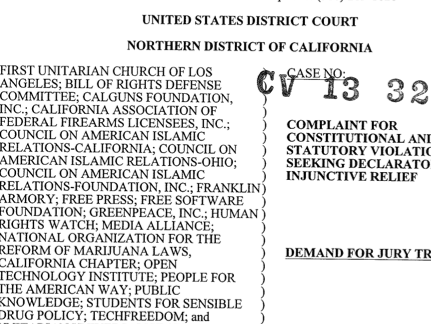 A coalition of odd bedfellows—including Greenpeace, CalGuns Foundation, the First Unitarian Church of Los Angeles, the Council on American Islamic Relations, and the National Organization for the Reform of Marijuana Laws—are suing the National Security Agency (NSA) over its alleged “illegal and unconstitutional program of dragnet surveillance.” The groups, which are being represented by the Electronic Frontier Foundation, are bringing the suit in the wake of revelations by former NSA contractor Edward Snowden that the secret US spy court forced Verizon, AT&T, and Sprint to hand over customer records to the feds.

“When the government has access to your communications records for a period of up to five years, it creates a chilling effect on your willingness to participate in political discourse and join political groups,” Cindy Cohn, legal director for the Electronic Frontier Foundation, said in a press call on Tuesday. EFF also sued the NSA in 2008 over the Bush Administration’s warrantless wiretapping program—a case that has yet to be resolved.

The plaintiffs allege that through the NSA’s tracking program, “defendants…continue to collect, acquire, and retain, bulk communications information of telephone calls made and received by plaintiffs, their members and staffs. This information is otherwise private.” They also claim that the collection of this information was “neither relevant to an existing authorized criminal investigation, nor to an existing authorized investigation to protect against international terrorism.” The charges are being brought as violations to the First, Fourth and Fifth Amendments, among other laws.

The Director of National Intelligence, Keith Alexander—who is also listed on the suit—testified last month that the NSA’s surveillance program has helped stopped more than 50 terror plots since 9/11. The NSA maintains that the only information that has been collected through phone surveillance is basic information called metadata, which includes information like which numbers made and received a call, when it took place, and how long it lasted.

At the call on Tuesday, representatives for the groups said that even though the coalition comes from across the political spectrum, they have one big thing in common: They feel their First Amendment rights are being squashed. Reverend Rick Hoyt from the First Unitarian Church of Los Angeles noted that the church played an important role in fighting hysteria during the McCarthy years, and he sees this as more of the same: “We’re very aware how organizations can be affected by government surveillance…we want to make sure our current church members feel they have the right to associate with this church.” Gene Hoffman, chairman of The Calguns Foundation, which fights gun control laws, said his members are “definitely” hesitant about calling his organization because of surveillance concerns. “It’s common to have caller-ID block for our members even before this [came out.]”

Shahid Buttar, the executive director of the Bill of Rights Defense Committee, a civil rights organization that fights to end racial profiling, notes, “A lot of our members have had concerns about these kinds of activities happening for a long time, they’ve been dismissed for years by the broader public as paranoia… The people who suspected they were being watched, until now, couldn’t prove it.”