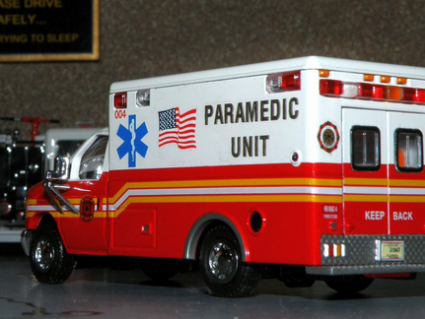 New Yorkers are living with the fear that their city’s breakdown-prone emergency dispatch system could fail them when they need it most. It’s a fear that other major American cities have lived with for years.

New York City’s system has been under public scrutiny since June, when emergency responders were delayed by four minutes in responding to the scene where a four-year-old girl was killed after being struck by a car while walking to school with her grandmother. A watchdog agency has launched an official investigation into the system, which cost $88 million and has only been operational since May. In July, the New York Post reported that the system had crashed at least nine times in a single week. It’s also drawn blame for leaving a crash victim unaided on a highway for almost two hours, and marooning a paramedic with a dead body.

Made by a company called Intergraph Government Solutions—whose board is well stocked with former security officials from the George W. Bush administration—the software will soon be coming to Boston, which plans to spend $15 million on its contract.

When 911 systems break, experts say it’s often because undertrained municipal technicians can’t troubleshoot failures in the Computer Aided Dispatch (CAD) software they rely on. Most malfunctions don’t hamper the collection of callers’ automatically traced location data—instead, the failures affect what happens to the caller’s information after it’s given to a 911 operator. CAD systems power databases that track locations’ call histories, and show where available police, fire, or EMS units are. Breakdowns can leave operators without this crucial information, delaying the speed and accuracy of responses. Many systems are also made to dispatch units with the click of a mouse, instantly transferring CAD reports to mobile computers inside emergency response centers or vehicles—without requiring an operator to use a phone or radio. These functions can fail independently, or as part of a wider system breakdown.

Paul Linnee, who has 40 years of experience designing and managing public safety communications systems and helped run one of the first CADs in the country—in Minneapolis in 1977—says that in the early years dispatch workers “put our blood, sweat, and tears into figuring out the technology.” Now he warns that most technical knowledge is outsourced to expensive contractors, and some contractors are better than others at helping cities figure out how to run their programs successfully.

Linnee says when CAD software is used straight out of the box, it tends to work. But cities’ systems are endlessly customized, which Linnee notes requires time-consuming and expensive training. “If you’re a company working in a big city like New York, and you know you’re going to have a nightmarish installation, you need to put a team of 15 really smart developers in Brooklyn, and keep them there for two years, and hold the city’s hand until they get it right,” he says. “But that could cost the company $3 million, and that scenario is not going to happen. Until cities will pay for that, four-year-old girls are going to get killed, buildings will burn, and ambulances won’t be dispatched.”

New York isn’t the only city grappling with 911 computer system troubles—in just the last two years, Los Angeles, Chicago, San Francisco, and other local governments have had similar issues. Here are seven more cities and counties that have seen their software go down in the last few years:

What happened? The Los Angeles Fire Department’s CAD system crashed at least twice in March, preventing dispatchers from communicating with fire stations and paramedics from reaching gravely injured people, according to an investigation by the Los Angeles Times. On March 2, a malfunctioning alarm system caused firefighters to arrive a couple of minutes late to a burning house; two people died. Firefighters said it was impossible to know for sure, but the delay may have contributed to the fatalities.

On March 7, an elderly man was having trouble breathing, but responders couldn’t find him because the computer didn’t transfer the address correctly. And on that same day, a woman was working in a printing factory when a machine severed her finger. It took paramedics 45 minutes to arrive and, because too much time had elapsed, doctors were unable to reattach the woman’s finger. (Fire chief Brian Cummings told the Times that during that day’s crash, just two calls out of 1,000 were missed.) But a veteran dispatcher told the paper that the crashes had become so prevalent, he was tracking available emergency vehicles with a peg board and golf tees. A grand jury was called to investigate and a report issued in late June—less than one week before a July 5 tweet from the Los Angeles Fire Department admitting that its computer system had crashed again—recommended that Los Angeles’ 30-year-old CAD system be “brought up to current technology levels.”

Seattle
Date of Crash: July 4, 2012; other unknown dates
What happened? King 5 News reported that on the Fourth of July, the CAD system Seattle police used crashed, forcing dispatchers to write down calls by hand. This reportedly didn’t affect dispatch time, as the mobile computers inside individual police cars were still working. The television station reported that the system “does occasionally go down.”

Chicago
Date of Crash: July 2-3, 2012
What happened? The Chicago Sun-Times reported last July that Chicago’s CAD system went down for four hours. Without a working backup system, dispatchers resorted to taking calls manually and paging emergency responders through radio, rather than using their software. A spokeswoman for Chicago’s emergency services told the paper that the system has gone down before, but she didn’t know when.

Bethlehem, Pennsylvania
Date of Crashes: Multiple incidents since 2008
What happened? In January 2012, the Morning Call reported that the $770,000 CAD system used by Bethlehem had crashed “often” since it was installed in 2008. Police told the paper that reports went missing from the system, and that every time the system broke down dispatchers had to take notes by hand. In June and July of 2011, operators had to restart the CAD system 58 times, and in 10 cases, they weren’t able to revise call logs with new information. In January, Bethlehem launched an investigation and filed formal notice that it was considering suing CODY Systems, the company that makes the system, for breach of contract.

PORTLAND AND MULTNOMAH COUNTY, OREGON
Date of Crash: Spring 2011
What happened? Just one month after the $14.5 million CAD system serving Portland and Multnomah County was installed in April 2011, the Oregonian found that there had already been more than “400 safety concerns,” including losing track of the whereabouts of officers and failing to provide appropriate safety alerts. Later that spring, the city’s police union reported recording around “1,000 defects” in the system’s first few months of operation. An officer told the Oregonian that the system repeatedly dispatched him to random addresses that had the number “215” in the street name—because he was in police unit 215. The system also incorrectly reported when an officer had left an incident. Fairview Police Chief Ken Johnson told the paper, “We’re risking people’s lives.” The Portland Bureau of Emergency Communications finally released an audit on July 15, 2013, finding that 911 dispatchers had been insufficiently trained.

san francisco
Date of Crash: May 13, 2011
What happened? San Francisco’s CAD system went down for more than 24 hours because of server problems. Dispatchers had to call emergency responders by radio, and officers had to write down pertinent information using a pen and paper, instead of having it automatically appear on patrol car laptops. Emergency responders told KGO-TV there was “no disruption” to 911 calls.

AUSTIN, TEXAS
Date of Crash: Multiple incidents from 2008 to 2010
What happened? Austin’s CAD software, which is made by a company called Versaterm, was found by KXAN News in November 2010 to have failed multiple times, sometimes forcing operators to take down information manually. The television station published a cringe-worthy exchange between a 911 operator and a man who was robbed by gunpoint (911: “Okay, so you said you were robbed by gunpoint?” Man: “Yes, by gunpoint.” 911: “One second, let me get this thing started. You said it just happened right now?”). Help was never sent, and the man had to call 911 again—30 minutes later.

Patricia Fraga, a spokeswoman for the city of Austin, tells Mother Jones that due to a beefed-up backup system and other updates “made in the last year” dispatchers won’t have to rely on pen and paper anymore. “The technology folks have been dedicated, their response has been good,” she says. But when asked whether Austin’s system has crashed again since 2010, she said, “I don’t know.”