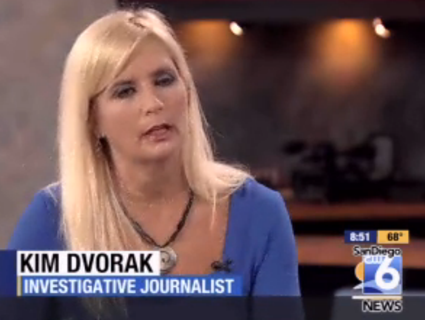 Screenshot: <a href="http://www.sandiego6.com/story/cia-director-brennan-confirmed-as-reporter-michael-hastings-next-target-20130812">San Diego 6</a>

The Los Angeles Police Department has ruled out foul play in journalist Michael Hastings’ fatal car crash two months ago in Hollywood, but several media outlets are continuing to promote conspiracy theories about the circumstances surrounding his death. The theories, which suggest Hastings was assassinated shortly after sending friends a frantic email, have received attention beyond the usual fringe suspects partly because of ongoing reporting by freelance blogger Kimberly Dvorak for the CW Television Network affiliate San Diego 6.

Dvorak, whom the station touts as an “investigative journalist,” is a “National Homeland Security Correspondent” for Examiner.com, a blog network owned by Republican billionaire Philip Anschutz that has minimal editorial oversight. Since Hastings’ death, San Diego 6 has repeatedly given Dvorak airtime to float conspiracy theories—that the crash was not consistent with a car accident, that Hastings was cremated to cover up foul play, that federal officials may have ordered him killed. None of these theories, which often come from unnamed sources, are backed up by convincing evidence, but reputable media outlets keep falling for Dvorak’s reporting anyway.

Last month, for example, the Independent, a major British newspaper, picked up Dvorak’s report claiming that Hastings’ body “was cremated and it wasn’t the request of the family…in fact, the family wanted Michael’s body to go home.” But on Tuesday, veteran journalist Russ Baker dispelled the myth on his news site WhoWhatWhy by talking to a family member who confirmed that the cremation was done at the family’s request. Dvorak later removed the passage saying Hastings’ family wanted his body to “go home,” but her story still hints at a cover-up, calling the cremation a “macabre twist.”

Dvorak’s other theories are just as questionable. She claimed on air that the engine of Hastings’ Mercedes C250 coupe had been found behind the crash site, which would have been impossible with the forward velocity of an ordinary accident. The engine was found in front of the crash site. Her suggestion that a grainy video of the crash showed evidence of a “pre-explosion” sabotage has been dismissed by car experts. She has also reported that the intensity of the resulting fire might suggest the use of thermite accelerants—a popular theory among 9/11 truthers who believe thermite was used to melt the World Trade Center towers’ steel columns. She’s written credulously about the theory that President Barack Obama may not have been born in the United States. And Dvorak has repeated speculation by Richard Clarke, the former Bush- and Clinton-era counterterrorism czar, that Hastings’ car’s computer system may have been remotely hacked—something that’s technically possible but highly unlikely.

Dvorak also thinks the LAPD’s refusal to turn over information about its investigation is evidence of a conspiracy. “Despite the LAPD’s categorization of the Hasting[s] fatal accident as [not involving foul play],” she wrote, the police continue to ignore “requests made by San Diego 6 News for the police report, 9/11 call, autopsy, bomb squad and toxicology reports, or make the Mercedes available for inspection.” The police department’s reluctance to comply with Dvorak’s requests “only fuels conjecture,” she added. Dvorak recently received the 911 calls, which she suspects the LAPD may have given her to defy federal officials who are covering up the investigation, and says she’s enlisted the help of Judicial Watch, a conservative legal watchdog group funded by billionaire media mogul Richard Mellon Scaife, as she continues to file public records requests with local and federal agencies.

“I’m going out on a limb reporting this,” Dvorak tells Mother Jones when asked about her theories. “Journalists are becoming so irrelevant right now.” As Dvorak sees it, the story of Hastings’ crash must be told, even though she says she’s received death threats over her reporting, and no other journalists are interested in telling it. She hasn’t ruled out the possibility that the “stars could have aligned” and resulted in a tragic accident. But she says she remains suspicious that Hastings may have “faked his death” or been assassinated. “Whether it turns out to be true or not, that’s a whole other issue,” she adds. (San Diego 6’s news director, Irv Kass, who also writes for Examiner.com, did not respond to requests for comment.)

Dvorak’s reporting—and mainstream media outlets’ embrace of it—is ongoing. On Monday, Dvorak reported that she had “confirmed” a claim made last week by Hastings’ widow, Elise Jordan, that Hastings was working on a profile of CIA Director John Brennan at the time of his death. (The news that Hastings had been investigating Brennan first appeared in the Los Angeles Times the day after Hastings’ death in June.) “It’s curious how his wife came out and talked about [Hastings’ death] and kind of had a smile on her face and didn’t seem like a grieving widow,” Dvorak says.

Riffing off the Brennan detail, Dvorak referenced an old WikiLeaks email about the Obama administration’s investigation of classified leaks to suggest that Brennan may have targeted Hastings. The next day, Reason linked to Dvorak’s report, citing its supposedly “[n]ew details.” Fox News, the International Business Times, and the Epoch Times also cited her reporting.

If Brennan or the CIA didn’t play a role in Hastings’ death, perhaps Army General Stanley McChrystal, who resigned after Hastings quoted him and advisers in Rolling Stone mocking government officials, had something to do with it, Dvorak has suggested. After quoting a friend of Hastings who said the crash “wasn’t an accident,” Dvorak cited a passage from The Operators, Hastings’ book about the Afghanistan war. Hastings wrote that Jake McFerren, a top civilian adviser to McChrystal, threatened that he and other McChrystal staffers would “hunt…down and kill” Hastings if they didn’t like how the Rolling Stone profile turned out. (Hastings wrote that McFerren later apologized.)

Dvorak is a “fucking disgrace,” Matt Farwell, a writer and friend of Hastings who is finishing his Brennan profile for an upcoming issue of Rolling Stone, told WhoWhatWhy. Farwell wants Hastings’ death to be investigated, but “unless it’s good solid shoe leather journalism…it’s not helping anyone,” he said. “It makes the LAPD and the feds go into closed-off mode and makes people not want to say anything.” (Asked to comment on the Hastings investigation and Dvorak’s theories, the LAPD replied with an email saying, “We have no further comment on this matter.”)

Farwell is unlikely to sway Dvorak, who says she doesn’t know who he is and that his criticism “doesn’t bother me one way or another.” She says she probably won’t keep making regular appearances on TV until she hears back about her latest records requests but plans to keep reporting until details of Hastings’ death become clear. “There’s a huge dialogue that’s been created out of this,” she says. “I think Michael would have really liked that. I’m fairly certain he would welcome that discussion.”