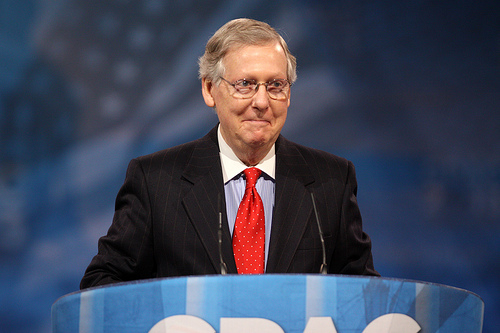 In 2014, ground zero for our cash-drenched, post-Citizens United politics will undoubtedly be Kentucky. Senate Minority Leader Mitch McConnell faces a tea party challenger, Matt Bevin, in the GOP primary and, barring a stunning upset, the Clinton-backed Democrat Alison Lundergan Grimes in the general election. As I reported in July, Grimes says she’ll need between $26 million and $30 million to defeat McConnell. Only four Senate candidates raised more in 2012.

Now, the Washington Post‘s Chris Cillizza has run the numbers and made a odds-on prediction: The Kentucky race will be the first $100 million Senate election—and so the most expensive—in American history.

Cillizza builds a strong case. McConnell, who raised $21 million for his 2008 reelection campaign, already has nearly $10 million in the bank. To get past Bevin, his pesky primary challenger and a wealthy businessman with millions at his disposal, McConnell could end up spending $5 million to win the primary. Cillizza says McConnell could go on to raise and spend upwards of $35 million overall. And if Grimes, the Democrat, meets her $30 million target, then we’re talking about a $65 million to $70 million race.

And that’s before the outside money starts pouring in. Here’s Cillizza:

Consider the two national parties. The National Republican Senatorial Committee will spend almost everything it has to bring McConnell back, given his prominence within the party and the amount he has done for the committee over the years. And, while the Democratic Senatorial Campaign Committee has plenty of its own incumbents to defend, beating McConnell might make up for lots of other losses in other places, and the committee knows it. It’s easy to see both the NRSC and the DSCC spending in the neighborhood of $10 million each—and that might well be conservative—on Kentucky. Add that $20 million, and the cost of the race is already at $90 million.

The final piece of the spending puzzle is the super-PAC world. A pro-McConnell super PAC—Kentuckians for Strong Leadership—brought in more than $1 million in its first four months of existence. There will be much, much more where that came from. And it’s a certainty that Democrats will set up a super-PAC of their own to support Grimes/beat up McConnell. Aside from those quasi-official super PACs for the two candidates, there will be lots of other interested parties who want to make their voices heard—read: spend money in the most high-profile Senate race in the country. Will all of these groups combine to spend $10 million? Um, yes.

Cillizza’s prognosticating is a little fuzzy on super-PACs, so here’s more to consider. Senate Majority PAC, the super-PAC devoted to electing Senate Democrats, has already hammered McConnell on the airwaves, and it will no doubt continue to attack as long as the race remains competitive. There’s also the American Crossroads super-PAC and its secretly-funded sister nonprofit, Crossroads GPS. The president of the two Crossroads groups is Steven Law, McConnell’s former chief of staff. You can bet that the Crossroads juggernaut will make itself heard in the Bluegrass State. With all those major outside players eyeing Kentucky, super-PAC and dark-money spending could easily blow past Cillizza’s $10-million estimate.

In 2012, the nation’s marquee Senate race was in Massachusetts, pitting incumbent Scott Brown against Elizabeth Warren. That race cost more than $80 million, falling short of the $100 million threshold only because Brown and Warren agreed to a “people’s pledge” keeping most super-PAC and nonprofit spending out of their race. In 2014, the spotlight is on Kentucky, and with no truce in sight, crossing that $100 million milestone is looking like a foregone conclusion.