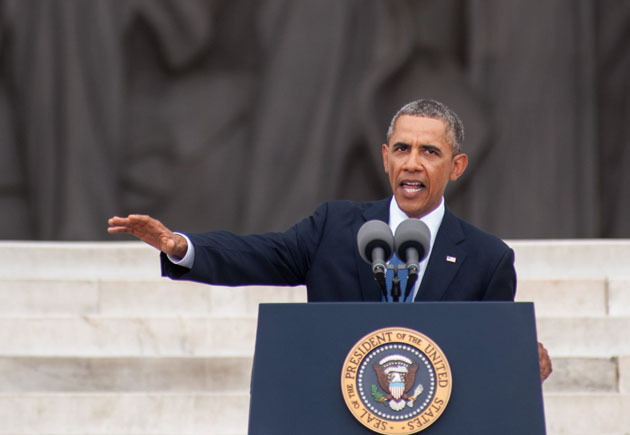 In May, President Barack Obama gave a commencement address at the historically black Morehouse College—Martin Luther King, Jr.’s alma mater—that was criticized by many black progressives as condescending for its focus on personal responsibility. He told the young graduates that “there’s no longer any room for excuses” and that “whatever hardships you may experience because of your race, they pale in comparison to the hardships previous generations endured—and overcame.” In response, The Atlantic‘s Ta-Nehisi Coates wrote, “Barack Obama is, indeed, the president of ‘all America,’ but he also is singularly the scold of ‘black America.'”

This was hardly the first time Obama had ventured into such territory, and black critics have often complained that when he addresses black audiences, he turns into a presidential Bill Cosby, acknowledging inequality but also unproductively lecturing black people to stop making excuses for the challenges and problems they face. So it was no surprise that Obama’s speech on Wednesday marking the 50th anniversary of the March on Washington, which noted that economic fairness for all remains “our great unfinished business” and which was generally well-received by Obama supporters, reiterated this riff:

And then, if we’re honest with ourselves, we’ll admit that during the course of 50 years, there were times when some of us, claiming to push for change, lost our way. The anguish of assassinations set off self-defeating riots.

Legitimate grievances against police brutality tipped into excuse-making for criminal behavior. Racial politics could cut both ways as the transformative message of unity and brotherhood was drowned out by the language of recrimination. And what had once been a call for equality of opportunity, the chance for all Americans to work hard and get ahead was too often framed as a mere desire for government support, as if we had no agency in our own liberation, as if poverty was an excuse for not raising your child and the bigotry of others was reason to give up on yourself. All of that history is how progress stalled. That’s how hope was diverted. It’s how our country remained divided.

And there was no surprise that this slice of the speech got under some peoples’ skin. Here are Twitter reactions from several black writers, intellectuals, and activists:

Major of black folks are not lazy or crying & much of our poor have no bootstraps, Mr. Obama.He only lectures black folk like that. #mow50

Obama, see, there you go again with that “pull yourself up by your bootstraps” bullshit. Did you tell that to Wall Street?

Some people get so upset when you don’t bow at the feet of President Personal Responsibility. #NoTavis

This likely won’t be the last time Obama brings up the controversial theme. It’s clear he’s decided that in order to effectively speak about racial inequality and economic injustice, he has to throw in a dash of tough love.