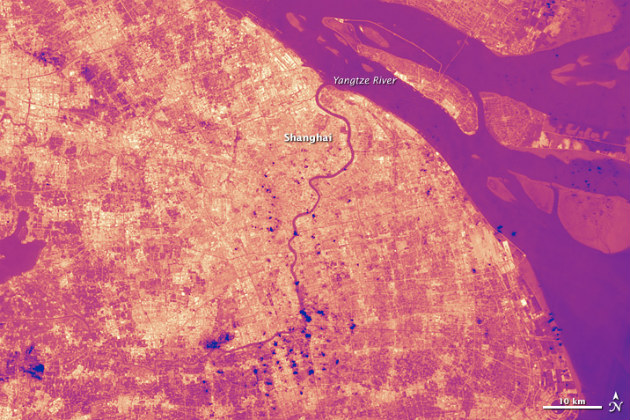 The heat-island effect that drives concrete cities to temperatures more appropriate to a pizza oven is easy enough to feel. Step outside, get spanked by sweltering air pouring off sidewalks and buildings, which during fierce summers get hot enough to fry pork or even a poor Chinese man who recently passed out on the hot ground and was cooked like “teppanyaki.”

But unless you have heat-sensing pit organs on your face, like a snake, it’s hard to visualize the feverish dome that covers a city in the summertime. NASA’s come up with a fix for that, though, using its Landsat 8 satellite. The orbiting probe is equipped with a thermal-infrared sensor, originally intended to help U.S. water-resource managers keep track of the irrigation of farmland. On August 13, the space agency gave Landsat a different directive: Find out just how intense the heat island is over Shanghai, where 10 people (out of at least 40 countrywide) have perished due to extreme temperatures.

Shanghai and many other Asian cities is slogging through a particularly odious heat wave aggravated by a stubborn high-pressure system over southern China. This past month was the hottest July in a hundred years of records for Shanghai, which had 31 straight days with temperatures above 95, including an unprecedented high on August 7 of 105.4 degrees. Nationally, it’s been the hottest summer on the books since 1951. For the first time in Chinese history officials have issued a “level two” emergency response for severe heat, an action normally reserved for major disasters like flooding and typhoons.

On the micro-scale, this blistering weather has meant people cooking seafood on manhole covers, a tree and a billboard spontaneously combusting (someone should probably fact-check that one), chicks busting out of eggs without the aid of incubators, and a suicidal man fainting before he was able to jump off a crane and die. In the larger sense, it’s causing cities to act like colossal kilns, sucking up heat during the day and then gradually releasing it during the sweaty, lousy night.

Here’s a larger version of the above Landsat image showing Shanghai’s heat island in full effect. Hot surfaces are yellow, with the brightest white-canary hues representing 104-degree heat. Pinkish regions indicate cooler zones and are rife in the suburbs: 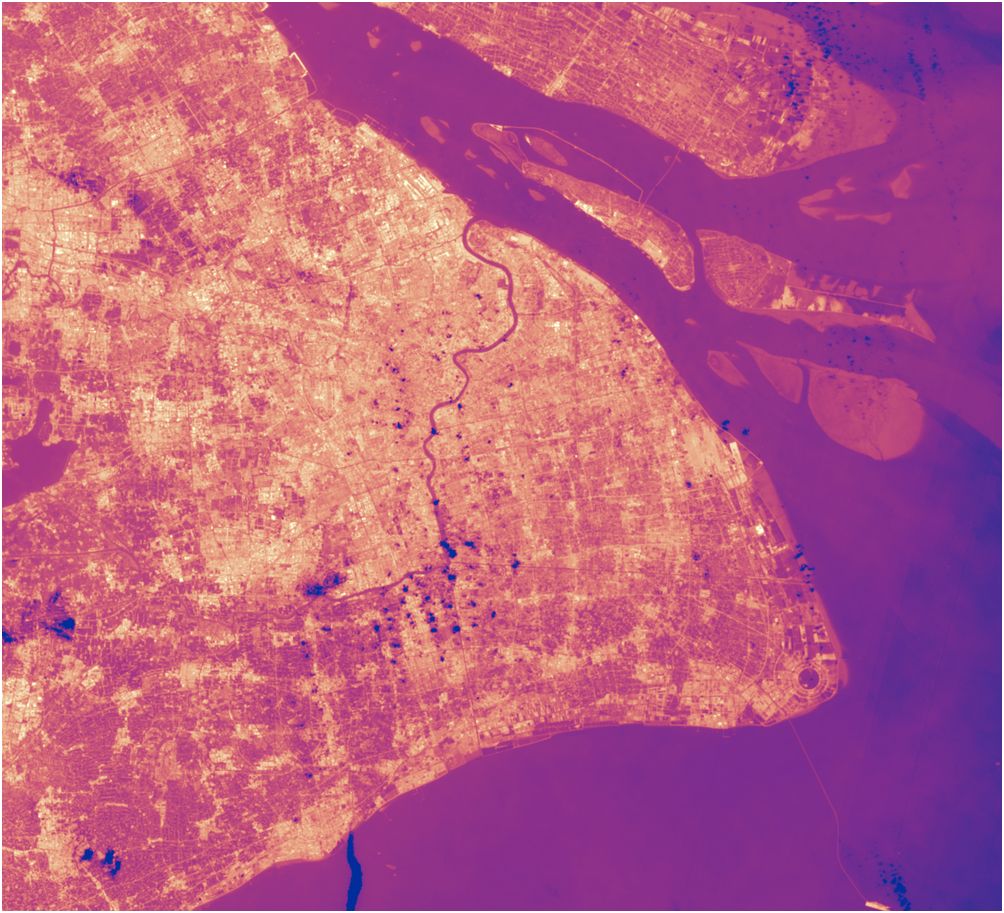 Is this one of those severe heat waves that scientists warn are inevitably coming around the bend? That will take more research to figure out, but at least one Chinese climatologist, Li Weijing, is already blaming greenhouse gases. “With a background trend of global warming,” he told Xinhua, “extreme events like abnormally hot summers and cold winters will become frequent.”