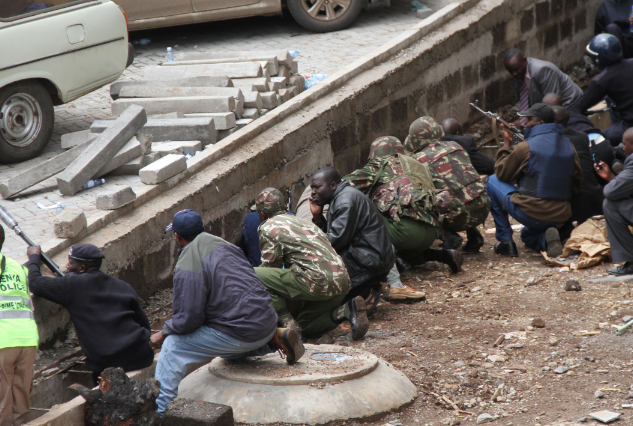 Kenyan soldiers and policemen prepare for the next operation near Westgate shopping centre in Nairobi.<a href="http://www.zumapress.com/search_results.html?SRCH1=nairobi+mall&srchtype=&kwd=&person=&person_text=&timerange=&ksrchtype=&RESULTSPERPAGE=96&FILESrchType=is&FILE=&agency=&newspaper=&keyName=&colName=&agencyName=&newspaperName=">Fred Muturi</a>/ZUMA

Update (9/2/2014): On Tuesday, Somali and American officials said that a US airstrike launched Monday possibly killed al-Shabaab leader Ahmed Abdi Godane, although officials were still waiting for confirmation, the New York Times reports. Godane is believed to have organized the mall massacre in Nairobi.

On September 21, 2013, a popular mall in Nairobi, Kenya turned into a bloody battleground when a Somali terrorist group seized hostages and killed more than 60 people. As Kenyan troops continue to fight the gunmen and shaken locals attempt to make sense of Kenya’s worst terrorist attack since 1998, Republican lawmakers are insisting the attack is proof that Al Qaeda is growing stronger, contrary to what the Obama administration’s contends. Rep. Pete King (R-N.Y.) went so far as to argue that the Nairobi assault shows that Al Qaeda is still “extremely powerful.” But is al-Shabaab—the Al Qaeda-affiliated group claiming responsibility for the attacks on the upscale Westgate Mall—as dangerous as the GOP claims? Here’s everything you need to know about the group, its strength, and its motives:

What is al-Shabaab, and what is its relationship with Al Qaeda? Al-Shabaab, also known as “The Youth,” is a designated foreign terrorist group based in Somalia that has been publicly affiliated with Al Qaeda since 2012, according to the US State Department. The group told Al Jazeera on Monday that it considers Al Qaeda a partner in the Nairobi attack and is taking orders directly from their leadership. It’s widely believed that the group’s senior leaders trained with Al Qaeda forces in Afghanistan in the late 1990s and received funding from Osama bin Laden. Al-Shabaab was originally the military workhorse for a political group called the Islamic Courts Union, which in 2006 seized control of most of southern Somalia before the organization was swiftly ousted by Ethiopian troops backing Somalia’s then-transitional federal government. Most of the original ICU members headed to Somalia’s neighboring countries, but al-Shabaab forces stayed in the south of Somalia, where they radicalized and instated Shariah law across the areas they controlled. Since then, they have been engaged in guerilla warfare against the Federal Government of Somalia, which took over from the transitional government in 2012 and is backed by an African peacekeeping alliance that includes Kenya and Ethiopia, plus the United Nations and the United States. The green areas on this Somalia map are currently under al-Shabaab control, according to the BBC: 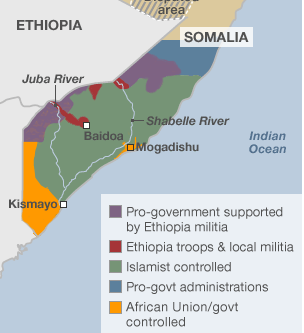 Who is al-Shabaab’s leader? Ahmed Abdi Godane took over the group in June after murdering four other top commanders. Here is his identifying information, according to Rewards for Justice:

Why did al-Shabaab attack a mall in Kenya? In October 2011, Kenya sent hundreds of troops into Somalia with the designated purpose of kicking out al-Shabaab. The Kenyan government had become concerned that Kenya could be a target for terrorism after al-Shabaab killed more than 70 civilians in Uganda in 2010. Kenyan forces bombed key al-Shabaab strongholds in Somalia, including a major airport, and cut off al-Shabaab’s economic resources in the port city of Kismayo in 2012. The mall attack in Nairobi reportedly occurred because al-Shabaab wants Kenyan troops out of Somalia. Sheikh Abulaziz Abu Muscab, a spokesman for the terrorist group, told Al Jazeera that the mall is “a place where Kenya’s decision-makers go to relax and enjoy themselves [and] a place where there are Jewish and American shops. So we have to attack them.?”

What does al-Shabaab want? The different factions of al-Shabaab have splintered goals. However, the most vocal members are against the Somali government, any country that backs the Somali government (like Ethiopia, Uganda, and Kenya), Israel, Christians, and the West. In a 2007 statement, the group said it is “seeking to establish an Islamic state along the lines of the Taliban-ruled, by-the-law-of-Allah in the land of Somalia…[and] seeks to expand the jihad to Somalia’s Christian neighbours, with the intent of driving the infidels out of the Horn of Africa, along the same lines as al-Qaeda has been striving to do under the slogan, ‘expelling the infidels out of the Arabian Peninsula.'”

How big is al-Shabaab? Are there any Americans in it?! There are at least several thousand members of al-Shabaab, as well as a few hundred foreigners, according to NBC News. In 2011, US officials reported that at least 40 Muslim Americans—some of whom were recruited from the vibrant Somali American community in Minnesota—as well as 20 Canadians, were fighting for al-Shabaab. One of the terrorist group’s top leaders, who was killed this summer, was a “rapping Jihadist” from Alabama named Omar Hammami. Al-Shabaab also claims that three of the gunmen who stormed the Nairobi mall over the weekend were Americans, but the FBI is still investigating.

Wait…Somalia? Are members of al-Shabaab the infamous Somali pirates? 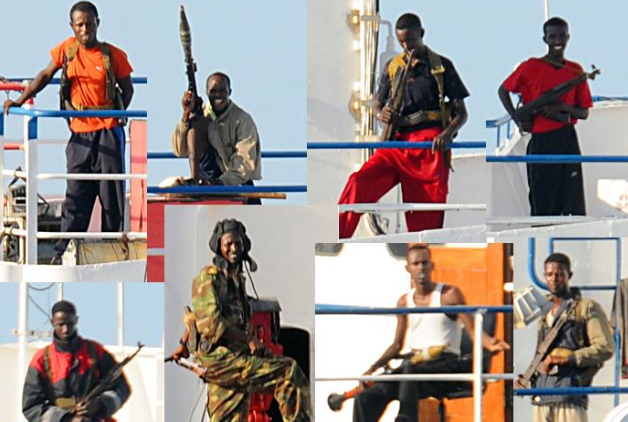 No. According to the Council on Foreign Relations, there is no direct connection between al-Shabaab and the Somali pirates, who in the last eight years have hijacked boats from more than 100 countries, held at least 3,740 crewmembers hostage, and thwarted climate change research. In general, the pirates are primarily focused on money, not jihadist ideology. However, as al-Shabaab has become increasingly desperate for funding, it has entered into financial agreements with the pirates.

So where does the group get its money? In 2011, the United Nations reported that al-Shabaab was getting between $70-$100 million per year by collecting taxes from the areas it controls. Until 2012, for example, al-Shabaab ran the port city of Kismayo, and it made a bunch of money from a racketeering business that exploited the city’s thriving coal industry. But after foreign forces kicked the group out of Somalia’s capital and Kismayo, it lost much of this revenue. The BBC says that Eritrea is now the group’s only ally in the region, although the country’s government has denied sending arms to al-Shabaab. (Google: Where is Eritrea?) According to the Council on Foreign Relations, the group also gets funding from kidnapping operations and allied terrorist groups.

What damage has al-Shabaab done in Somalia? In the areas al-Shabaab controls, the government stones women who commit adultery, cuts off the limbs of people who steal, and forces young boys to fight in battle. Somalia is home to one of the world’s most dire food crises, but al-Shabaab has “denied the existence of the famine, diverted water from poor villages, and kept food away from the people who need it most,” according to The New Republic. The group has launched a wave of deadly suicide bombing attacks across Somalia over the last few years—including one earlier this month that killed 15 people in a crowded restaurant. The US State Department notes that al-Shabaab is responsible for the assassination of Somali peace activists, international aid workers, numerous civil society figures, and journalists.

When else has al-Shabaab launched terrorist attacks abroad? Outside of the attack in Nairobi, the group’s biggest terrorist incident abroad occurred in 2010, when al-Shabaab mounted a coordinated wave of suicide bombs that killed more than 70 people in Uganda during the World Cup. Al-Shabaab has been blamed for attacking a bus station and a bar in Nairobi in 2011—injuring more than 20 people—and using grenades to kill at least six people in March at a Nairobi bus station, according to Reuters.

Is al-Shabaab a danger to the United States? The group’s leader, Ahmed Abdi Godane?, has threatened to attack the United States—but whether it can is debatable. Sen. Tom Coburn (R-Okla.), the ranking Republican on the Homeland Security Committee, told CBS’s Face the Nation that Al Qaeda is “on the rise, as you can see from Nairobi.” The American Enterprise Institute’s Katherine Zimmerman testified that “any strategy to counter the Al Qaeda network must recognize the role of these local groups in strengthening the network.”

But foreign policy experts point out that in many ways al-Shabaab is on the decline. The group has been pounded by the Kenyan and Ethiopian militaries and suffers from internal feuding. According to the Combating Terrorism Center at West, “the militant group has transformed from a Sharia-enforcing body to a weakened band of insurgents…It has ceased to be a viable political alternative to the Somali government.” Slate notes that this could mean the group will start turning its focus to foreign targets, rather than attempting to govern a failed state. But for now, the Obama administration is not proposing any further US military action against the group (it’s already doing drone strikes). “It’s not a question of either direct action or playing a supporting role,” National Security Council spokesman Jonathan Lalley told CBC. “Our approach has been to work to enable and support African partners.”