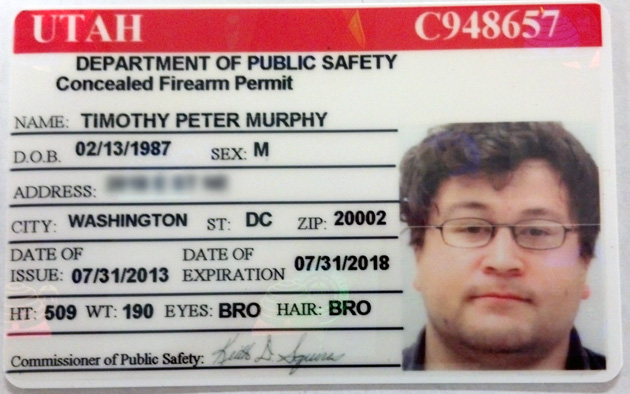 Armed and quite possibly dangerous

According to the state of Utah, I earned the right to carry a concealed handgun on a Saturday morning in a suburban shopping center outside Baltimore. Toward the back, next to a pawnshop and White Trash Matt’s tattoo parlor, is the global headquarters of Dukes Defense World, a mom-and-pop firearms instruction shop certified by the Utah Bureau of Criminal Identification to teach nonresidents firearm safety as a prerequisite for obtaining a concealed-carry permit.

My achievement doesn’t make sense for a number of reasons. One, I don’t live in Utah. I’m a resident of Washington, DC, a city that holds concealed handguns in roughly the same esteem as working escalators. I’ve never shot a gun. And in distinctly un-Utahn fashion, I’m nursing a hangover. Fortunately, none of that matters here. After four hours at Dukes Defense, I have a completed application and a snazzy graduation certificate for my wall. Sixty days after my application is processed, I’ll be able to carry a concealed weapon in no fewer than 32 states. It’s great for road trips.

Over the last two decades, Utah’s concealed-carry permit has emerged as a de facto national ID for handgun owners. It typifies a new era of arming Americans in public: 40 states now recognize some or all out-of-state permits, and 8 have made it legal in all or some circumstances to carry a concealed handgun without any permit at all. In April, the Senate came just three votes short of passing a measure that would have mandated reciprocity for concealed-carry permits—including the ones Utah so freely hands out—nationwide. 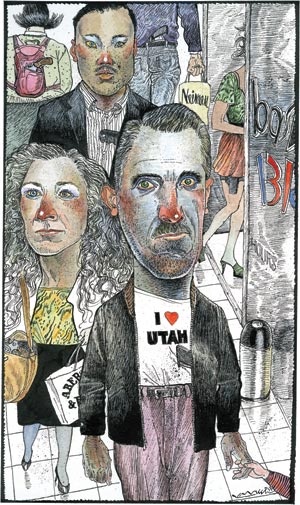 As part of a National Rifle Association-backed movement to roll back concealed-carry restrictions, in the mid-1990s Utah became a “shall issue” state. That means it grants concealed-carry permits unless it has a compelling reason (such as a felony record) not to do so. Licensees don’t need to demonstrate proficiency with a handgun, and they don’t even need to set foot in the Beehive State. They just have to take a class on firearm safety and pay a processing fee (approximately $50) and some of the cheapest renewal fees in the business (as little as 75 cents every five years).

The result has been a boom in out-of-state residents seeking permits and the birth of a cottage industry catering to them. As of June, nonresidents held more than 60 percent of Utah’s 473,476 valid concealed-carry permits. Maryland alone has 33 Utah-certified instructors. One, Mid-Atlantic Firearms Training, boasts “No Firearm Qualification Needed”; another, Semper Fidelis Consulting, touts its NRA ties and its convenience. (It makes house calls.)

My instructor is Kevin Dukes, a 20-year Army veteran who runs Dukes Defense World with his wife, Jenny. He’s ready for battle in cargo pants, a black polo, hiking boots, and black-rimmed hipster glasses that match his gray goatee. A handgun is on his hip. A black-and-white portrait of shotgun-pumping Hatfields—icons of responsible gun ownership if ever there were—sits in the corner. Across the room is a table with a paper invitation that will be his first topic of discussion: “Join the NRA.”

The pitch is straightforward. It costs just $35 to sign on with America’s top gun lobbying group, and membership comes with $2,500 of insurance in case anything happens to your piece. Dukes concedes that not everyone is a fan of the NRA’s politics, but in his view the group puts together smart training programs and its aim is true—”320 million people a year are being saved by guns, because they’re not being killed,” he tells us.

“The gun industry should send me a basket of fruit,” said a top NRA lobbyist who pushed for concealed-carry laws.

Dukes’ presentation focuses mostly on the law, or lack thereof, in Utah. He walks us through the verbal warnings we should give before using lethal force, but ends with a caveat: “In Utah, you’re not obligated to do that. You don’t have to do the hokey pokey and then turn yourself around.” In 1994, Utah was one of the first states to adopt a so-called Stand Your Ground law, the expansive self-defense doctrine now on the books in dozens of states and made famous after George Zimmerman killed Trayvon Martin.

We listen to a 911 call from a Utah woman whose husband had just killed a home invader. Dukes asks us what we’d do in that situation, and one of my classmates, who has already committed to moving to Texas to escape Maryland’s gun-grabbing government, says immediately that she’d pull the trigger. Dukes’ lesson: If you’re not prepared to kill, you’re not prepared to carry.

Gun rights activists boast that issuing more concealed-carry permits drives down crime and protects even non-gun-owners. But claims about millions of annual “defensive gun uses” are not backed up by reliable data. What statistics there are indicate that enforcement is marred by racial disparity: A white person who shoots a black person is 11 times more likely to have the homicide classified as justifiable than in the reverse situation, according to an analysis by the Urban Institute. (Mother Jones‘ ongoing investigation of public mass shootings shows that 5 of the 23 shootings that occurred since 2010 were carried out by killers using legally concealed handguns.)

While only 9 states had shall-issue laws on the books in 1980, today 41 do—great news not only for the likes of Dukes Defense, but also for the $12 billion gun manufacturing business. As a top NRA lobbyist noted in describing her work on concealed carry in 1996, “The gun industry should send me a basket of fruit.” Gun makers have taken to advertising directly to permit holders: Kahr Arms boasts that “Nothing fits better undercover” than its PM9 handgun. An ad for North American Arms’ mini-revolver touts that “NO gun is easier to carry or conceal.”

There has also been a push to conceal the growing numbers of people carrying weapons to church or the mall. In just the first five months of this year, 16 states passed a total of 33 laws relaxing concealed-carry restrictions, not only making guns permissible in more public places, but also sealing off permit records. West Virginia went so far as to exempt concealed-carry permit holders from federal background checks when purchasing firearms.

Utah lawmakers’ latest idea is to eliminate the requirement for a permit within the state’s borders entirely—what’s known as “constitutional carry.” In March, Republican Gov. Gary Herbert vetoed such a bill, but gun lobbyists are planning to make another push. Constitutional-carry-type laws already exist in eight states, including Arizona, where former Rep. Gabby Giffords’ assailant was exercising his legal right to carry a Glock 19 and high-capacity magazines. When I asked Carrick Cook, a spokesman for the Arizona Depart­ment of Public Safety, what it takes to carry a concealed handgun in Arizona, his response was brief: “Pretty much nothing.” (Residents in constitutional-carry jurisdictions may need to get a permit if they want to cross state lines with a weapon, but that’s usually a formality.)

As Dukes walks us through a long list of precautions, it’s clear that he’s passionate about safety. It’s equally clear that I don’t know the first thing about how to responsibly handle a firearm, let alone carry one in public. Jenny invites us to come up front to practice loading a handgun with fake rounds. When my turn comes, I struggle to load more than a few before they’re ejected halfway across the room. But that’s not going to stop Utah from giving me a permit.

A few weeks after my graduation, I call up Dukes. My application is still being processed, but a question has been nagging at me: What did a seasoned instructor think about the fact that pretty much anyone could walk in and get a Utah permit without demonstrating a lick of proficiency with a gun? While he seems disappointed that I signed up for the class with no actual desire to protect myself, he hardly hesitates: “The Constitution doesn’t say you need it.”