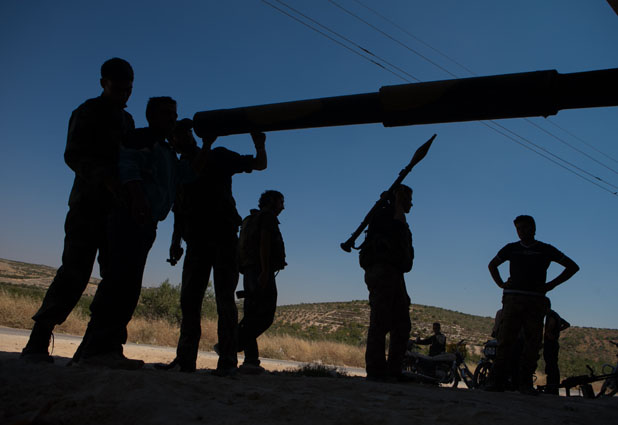 Members of the Free Syrian Army chatting in front of a T-72 tank parked in a secret location close to al-Rami village.Daniel Leal-Olivas/i-Images/Zuma

In search of popular and congressional support for a limited and narrow strike on Syria, President Barack Obama has contended that the aim of military action would be to punish Bashar al-Assad’s regime for its presumed use of chemical weapons and deter it from the further use of such horrific arms. The possible Russia-brokered deal that has emerged in the face of Obama’s threatened attack—Syria submitting its chemical weapons to international control—could prevent a US assault on Syria and yield Obama a diplomatic victory. But he would have to settle for an incomplete win. Assad would presumably not be able to launch another massive chemical weapons attack, but the Syrian dictator would not be truly punished for his military’s use of chemical weapons.

Under the no-details-yet arrangement being pursued by Washington, Moscow, and the United Nations, Assad would presumably give up control of his chemical weapons stock. How that happens remains to be seen. Will he hand over these arms to the UN or another international agency for destruction? Will he allow inspectors to monitor and guard his storage facilities? Will he truly honor the agreement and not stash some chemical weapons in a hiding place? But any regimen would certainly make it difficult, if not impossible, for Assad to once again use chemical weapons against his foes. Moreover, Vladimir Putin and Russia would now be on the hook, essentially guarantors that Assad would not again resort to such arms. And given that Russia is Assad’s No. 1 sponsor, Assad could not afford to tick off Moscow. So no matter how imperfect the international control system might be, there will be plenty of incentive for Assad to keep his hands off chemical weapons—and for Russia to lean on him. (Of course, in extreme circumstances—say, a situation in which the survival of the regime is at stake—Assad and his Russian pals might rejigger their calculations.) Consequently, a deal would likely achieve what Obama has sought: deterring Assad from further chemical weapons attacks.

Yet the accord in the works has no punitive aspect. Assad will not be held accountable for the August 21 attack near Damascus that killed 1400 civilians, including many children. And he will be able to continue slaughtering others with conventional means. Will other tyrants get the message that using chemical weapons will not be accepted by the international community?

Still, the possible unintended consequences of a punitive strike on Syria remain: civilian casualties, shifting the balance of power in favor of Al Qaeda-connected rebels, and creating more chaos and conflict in Syria and the region. Is punishing Assad worth potentially destabilizing the country further? (A collapse of the Syrian regime could lead to a WMD free-for-all there.) If this deal solidifies—and that’s a good-sized if—Obama might have to accept deterrence as the net gain. Afterward, he can focus on the tougher challenge of resolving the Syrian conflict and bringing Assad to justice.