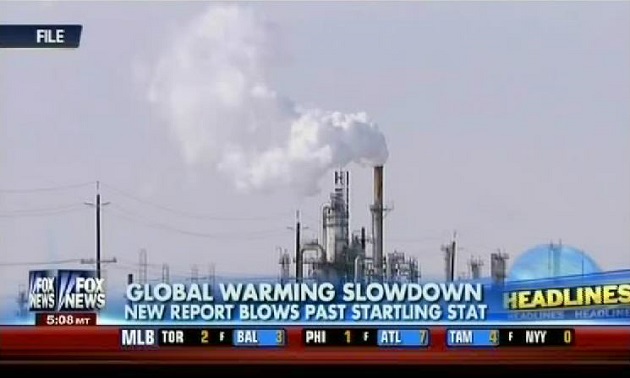 Following last month’s release of the biggest study in climate science—the UN Intergovernmental Panel on Climate Change’s Fifth Assessment Report—there have been many rumblings about skewed, misleading media coverage. But we didn’t have any data breaking down the press’s performance on the most important climate story in years…until now.

Media Matters has a new content analysis of coverage of the report’s release by major newspapers (the New York Times, the Washington Post, the Wall Street Journal, USA Today, and the Los Angeles Times), networks (ABC, NBC, CBS, Fox News, CNN, MSNBC), and online and wire services (Associated Press, Reuters, Bloomberg News). The period analyzed was from the beginning of August through the end of the September, since the report was leaked and much coverage occurred prior to its official release date of September 27.

So what did Media Matters find? The picture isn’t entirely bleak, but it contains plenty to be troubled about. Most notably:

Fox overrepresented climate skeptics by a factor of 23, compared with how they are represented in scientific publications. At the extreme of doubt-mongering was Fox News, whose reporting has previously been shown to sow feelings of distrust toward scientists. Sixty-nine percent of Fox’s guests discussing the IPCC report raised doubts about climate science, according to Media Matters’ analysis. This despite the fact that the global warming consensus is embraced by 97 percent of scientists publishing on climate change in peer-reviewed journals.

In other words, you might say that Fox coverage overrepresented skeptics by a factor of 23, compared with how they are represented in the scientific literature. 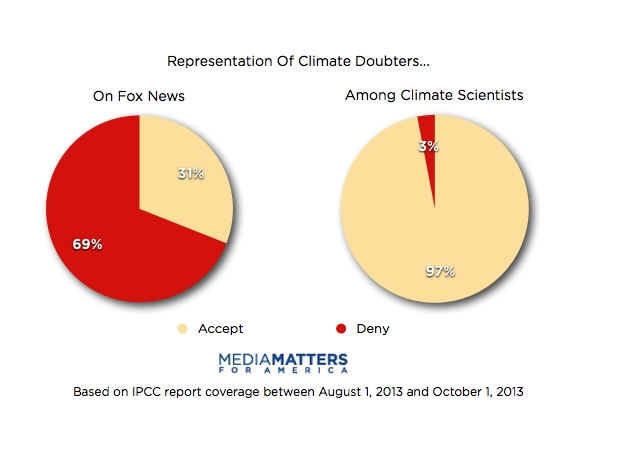 Notably, this percentage is higher than in a previous study by American University’s Lauren Feldman and her coauthors, which found that 46 percent of Fox guests were climate science doubters during the period from 2007-08. Perhaps Fox has grown even more skeptical since then; or perhaps there was a burst of skepticism associated with the new IPCC report in particular.

The press discussed the misleading global warming “pause” extensively. No other media outlet examined in the study was as doubt-centered as Fox. And yet, there are reasons to worry about the tenor of the coverage overall.

According to Media Matters, 41 percent* of overall news coverage of the IPCC report, and 49 percent of newspaper coverage, contained a discussion of the idea that the planet has not warmed in the last 15 years or so. That’s no crime in and of itself: It really depends on how these outlets covered this issue of the global warming “pause,” which has been blown out of proportion by climate skeptics but was also lent credence in a leaked draft of the IPCC report itself. For instance, was it adequately contextualized by noting that a small recent decrease in the rate of warming of late does not undermine climate concerns? And did journalists note that many of those citing the “pause” rely on selective use of statistics, such as starting their analysis with the year 1998, a record warming year?

Media Matters found that “many” of the outlets that brought up the pause did explain that it doesn’t mean global warming has gone away. But such a high percentage of mentions certainly suggests that the “pause” has become a meme. Overall, that’s a bad thing, because the meme has been widely used to cast doubt on the urgency of dealing with climate change. For more detail on how the media created the “pause” (with scientists’ help), see here. And for a thorough rebuttal, see here.

Media outlets and their coverage of an alleged “pause” in global warming.* Media Matters

CBS News also veered towards doubt-mongering coverage. Among other publications analyzed, Media Matters found significant issues with CBS News. It did a misleading segment on the “pause” on September 26, which started off with this opener by journalist Mark Phillips: “Another inconvenient truth has emerged on the way to the apocalypse. The new UN report on climate change is expected to blame man-made greenhouse gases more than ever for global warming. But there’s a problem. The global atmosphere hasn’t been warming lately.” (We discussed this CBS report here.)

Praise, as well as blame. There were plenty of media outlets that did a good job, too. As you can see above, ABC, MSNBC, and NBC* didn’t cover the “pause” at all. Meanwhile, Media Matters also found that the New York Times, Reuters, the Associated Press, and USA Today avoided quoting climate skeptics; not every media outlet felt a misguided desire to achieve “balance.”

Overall, the body of coverage couldn’t be called terrible. Yet the Media Matters report shows that climate skeptics still get plenty of air time, and one of their top talking points, the “pause,” filtered deeply into press coverage.

As a result, we can infer that the press, overall, sowed a great deal of doubt about climate science in the past two months. Scientists and journalists alike have some reckoning to do.

* Update: Media Matters’ study originally reported that CNN had not covered the alleged global warming “pause,” a finding we cited in this article. Media Matters subsequently corrected its study to include additional CNN segments, some of which did, in fact, mention the pause. We have revised this story accordingly.