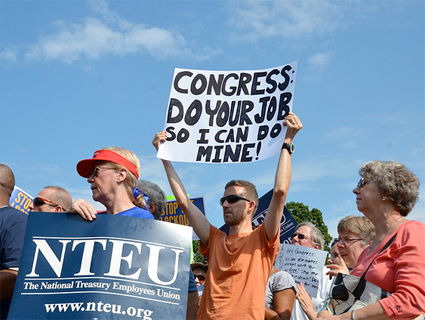 Prioritized above all else were, of course, “national security” activities, deemed beyond essential under the banner of “protecting life and property.” Surveillance at the National Security Agency, for instance, continued, uninterrupted, though it was liberated from its obviously nonessential and, even in the best-funded of times, minimal responsibility to disclose those activities under the Freedom of Information Act. Such disclosure was judged superfluous in a shutdown era, while spying on Americans (not to speak of Brazilians, Mexicans, Europeans, Indians, and others around the planet) was deemed indispensible.

Then there was the carefully orchestrated Special Operations Forces mission in Libya to capture a terror suspect off the streets of Tripoli in broad daylight, proving that in a shutdown period, the US military wasn’t about to shut off the lights. And don’t forget the nighttime landing of a Navy SEAL team in Somalia in an unsuccessful attempt to capture a different terrorist target. These activities were deemed essential to national survival, even though the chances of an American being killed in a terrorist attack are, at the moment, estimated at around one in 20 million. Remember that number, because we’ll come back to it.

Indeed, only for a brief moment did the shutdown reduce the gusher of taxpayer dollars, billions and billions of them, into the Pentagon’s coffers. After a couple days in which civilian Defense Department employees were furloughed, Secretary of Defense Chuck Hagel announced that 90% of them could resume work because they “contribute to morale, well-being, capabilities, and readiness of service members.” This from the crew that, according to Foreign Policy, went on a jaw-dropping, morale-boosting $5 billion spending spree on the eve of the shutdown to exhaust any remaining cash from the closing fiscal year, buying spy satellites, drones, infrared cameras and, yes, a $9 million sparkling new gym for the Air Force Academy, replete with CrossFit space and a “television studio.”

Then there were the nonessential activities.

In Arkansas, for instance, federal funds for infant formula to feed 2,000 at-risk newborn babies were in jeopardy, as were 85,000 meals for needy children in that state. Nutrition for low-income kids was considered nonessential even though one in four children in this country doesn’t have consistent access to nutritious food, and medical research makes it clear that improper nutrition stunts brain architecture in the young, forever affecting their ability to learn and interact socially. Things got so bad that a Texas couple dug into their own reserves to keep the program running in six states.

If children in need were “furloughed,” so were abused women. Across the country, domestic violence shelters struggled to provide services as federal funds were cut off. Some shelters raised spare change from their communities to keep the doors open. According to estimates, as many as six million women each year are victims of domestic violence. On average in this country, three women are murdered by an intimate partner every day.

Funds for early childhood education, too, were shut off. Seven thousand low-income kids from 11 states were turned away. Their “head start” was obviously less than essential, even though evidence shows that early education for at-risk children is the best way to help them catch up with their wealthier peers in cognition and adds to their odds of staying out of prison in later life.

The National Institutes of Health (NIH) wasn’t accepting new patients because of the shutdown. Typically 200 new patients arrive every week for experimental treatment. On average around 30 of them are children, 10 of whom have cancer.

Cancer, in fact, is the leading cause of death among children ages one to 14. But treatment for them didn’t qualify as essential. Unlike fighting terrorism—remember the less-likely-than-being-struck-by-lightning odds of one in 20 million—treating kids with cancer didn’t make the cut as “protecting life and property.”

A father of two young girls in the town of Eliot, Maine, said to a National Priorities Project staffer in disbelief, “If even one kid can’t get cancer treatment, isn’t that enough to end the shutdown?”

Let this be the last time we find ourselves on the wrong side of that question. Because every day we as a nation allowed our lawmakers to keep the government closed was a day in which we as a people were complicit in replying “no.”

Let this be the last time that a couple dozen Tea Party truckers are the only ones angry enough to take to the streets. The vast majority of Americans, whatever their anger when faced with pollsters or TV news interviewers, took this shutdown lying down, perhaps imagining—incorrectly—that they were powerless.

Let this be the last time we allow ourselves such lethargy. After all, there are 243 million Americans old enough to vote, which means 243 million ways to demand a government that serves the people instead of shutting them out. Keep in mind that in the office of every member of Congress is a staffer tracking constituent calls. And what those constituents say actually matters in how legislators vote. They know that a flood of angry telephone calls from their home districts means legions of angry constituents ready to turn out in the next election and possibly turn them out of office.

Americans, however, didn’t get angry enough to demand an end to the shutdown, perhaps at least in part because poisonous rhetoric had convinced many that the government was nothing more than a big, wasteful behemoth—until, at least, it shut down on them. Think of these last weeks as a vivid lesson in reality, in the ways that every American is intimately connected to government services, whether by enjoying a safe food and water supply and Interstate highways, or through Meals on Wheels, cancer treatment, or tuition assistance for higher education, not to speak of Social Security checks and Medicare.

Deep in the politics of the shutdown lies another truth: that it was all about taxes—about, to be more specific, the unwillingness of the Republicans to raise a penny of new tax revenue, even by closing egregious loopholes that give billions away to the richest Americans. Simply shutting down the tax break on capital gains and dividends (at $83 billion annually) would be more than enough to triple funding for Head Start, domestic violence protection, the Women, Infants, and Children nutrition program, and cancer care at the NIH.

So let this be the last time we as a nation let our elected officials cut nutrition assistance for vulnerable children at the same moment that they protect deep tax loopholes for the wealthy and corporations. And let’s call recent events in Washington just what they are: breathtaking greed paired with a callous lack of concern for the most vulnerable among us.

Such representatives obviously should not be reelected, but we need a long-haul strategy as well—the unsexy yet necessary systemic set of changes that will ensure our government truly represents the people. Gerrymandered district lines must be redrawn fairly, which means that citizens in each state will have to wrest control over redistricting from biased political bodies. California has set the example. Then the big money must be pulled out of political campaigns, so that our politicians learn how to be something other than talented (and beholden) fundraisers.

Finally, we must build, person by person, an electorate that’s informed enough about how our government is supposed to work to fulfill its responsibility in this democracy: to ensure, that is, that it operates in the best interests of the broadest diversity of Americans.

Ahead will be long battles. They’ll take years. And it will be worth it if, in the end, we can give the right answer to that father who asked a question that should have been on everyone’s lips.

Mattea Kramer is research director at National Priorities Project, where Jo Comerford is executive director. They authored A People’s Guide to the Federal Budget and serve as regular commentators for media outlets across the country.