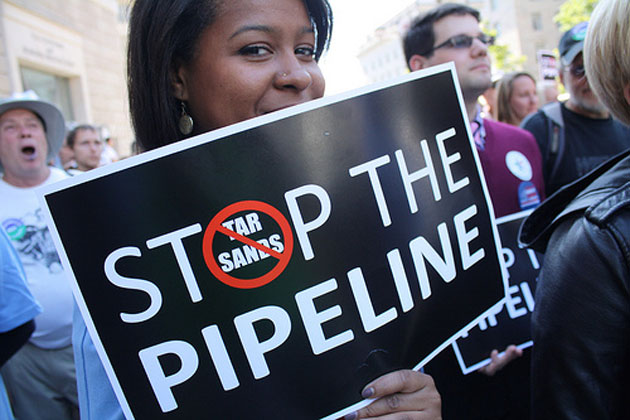 As the battle over the Keystone XL pipeline has worn on—and it’s now well over two years old—it’s illuminated the Obama presidency like no other issue. It offers the president not just a choice of policies, but a choice of friends, worldviews, styles. It’s become an X-ray for a flagging presidency. The stakes are sky-high, and not just for Obama. I’m writing these words from Pittsburgh, amid 7,000 enthusiastic and committed young people gathering to fight global warming, and my guess is that his choice will do much to determine how they see politics in this country.

Let us stipulate at the start that whether or not to build the pipeline is a decision with profound physical consequences. If he approves its construction, far more of the dirtiest oil on Earth will flow out of the tar sands of Alberta, Canada, and reach the US Gulf Coast. Not just right away or for a brief period, but far into the future, since the Keystone XL guarantees a steady flow of profits to oil barons who have their hearts set on tripling production in the far north.

The history of oil spills and accidents offers a virtual guarantee that some of that oil will surely make its way into the fields and aquifers of the Great Plains as those tar sands flow south. The greater and more daunting assurance is this, however: everything that reaches the refineries on the Gulf Coast will, sooner or later, spill into the atmosphere in the form of carbon, driving climate change to new heights.

In June, President Obama said that the building of the full pipeline—on which he alone has the ultimate thumbs up or thumbs down—would be approved only if “it doesn’t significantly exacerbate the problem of carbon pollution.” By that standard, it’s as close to a no-brainer as you can get.

These days, however, as no one will be surprised to hear, brainless things happen in Washington more often than not, and there’s the usual parade of the usual suspects demanding that Keystone get built. In mid-October, a coalition that included Exxon, Chevron, ConocoPhillips, and Royal Dutch Shell, not to mention the US Chamber of Commerce, the National Association of Manufacturers, and the Business Roundtable, sent Obama a letter demanding that he approve Keystone in order to “maintain investor confidence,” a phrase almost guaranteed to accompany bad ideas. A report last week showed that the Koch brothers stood to earn as much as $100 billion in profits if the pipeline gets built (which would come in handy in helping fund their endless assault on unions, poor people, and democracy).

But don’t think it’s just Republican bigwigs and oil execs rushing to lend the pipeline a hand. Transcanada, the pipeline’s prospective builder, is at work as well, and Obama’s former communications director Anita Dunn is now on the Transcanada dime, producing TV ads in support of the pipeline. It’s a classic example of the kind of influence peddling that knows no partisan bounds. As the activists at Credo put it: “It’s a betrayal of the commitments that so many of us worked so hard for, and that Dunn herself played a huge role in shaping as top strategist on the 2008 campaign and communications director in the White House.”

Credo’s Elijah Zarlin, who worked with Dunn back in 2008, wrote that attack on her. He was the guy who wrote all those emails that got so many of us coughing up money and volunteering time during Obama’s first run for the presidency, and he perfectly exemplifies those of us on the other side of this divide—the ones who actually believed Dunn in 2008, the ones who thought Obama was going to try to be a different kind of president.

On energy there’s been precious little sign of that. Yes, the Environmental Protection Agency has put in place some new power plant regulations, and cars are getting better mileage. But the president has also boasted again and again about his “all of the above” energy policy for “increasing domestic oil production and reducing our dependence on foreign oil.” It has, in fact, worked so well that the United States will overtake Russia this year as the biggest combined oil and natural gas producer on the planet and is expected to pass Saudi Arabia as the number one oil producer by 2017.

His administration has okayed oil drilling in the dangerous waters of the Arctic and has emerged as the biggest backer of fracking. Even though he boasts about marginal US cuts in carbon emissions, his green light to fracking means that he’s probably given more of a boost to releases of methane—another dangerous greenhouse gas—than any man in history. And it’s not just the environment. At this point, given what we know about everything from drone warfare to NSA surveillance, the dream of a progressive Obama has, like so many dreams, faded away.

The president has a handy excuse, of course: a truly terrible Congress. And too often—with the noble exception of those who have been fighting for gay rights and immigration reform—he’s had little challenge from progressives. But in the case of Keystone, neither of those caveats apply: he gets to make the decision all by himself with no need to ask John Boehner for a thing, and people across the country have made a sustained din about it. Americans have sent record numbers of emails to senators and a record number of comments to the State Department officials who oversee a “review” of the pipeline’s environmental feasibility; more have gone to jail over this issue than any in decades. Yet month after month, there’s no presidential decision.

There are days, in fact, when it’s hard to muster much fire for the fight (though whenever I find my enthusiasm flagging, I think of the indigenous communities that have to live amid the Mordor that is now northern Alberta). The president, after all, has already allowed the construction of the southern half of the Keystone pipeline, letting Transcanada take land across Texas and Oklahoma for its project, and setting up the beleaguered communities of Port Arthur, Texas, for yet more fumes from refineries.

Stopping the northern half of that pipeline from being built certainly won’t halt global warming by itself. It will, however, slow the expansion of the extraction of tar sands, though the Koch brothers et al. are busy trying to find other pipeline routes and rail lines that would get the dirtiest of dirty energy out of Canada and into the US via destinations from Michigan to Maine. These pipelines and rail corridors will need to be fought as well—indeed the fights are underway, though sometimes obscured by the focus on Keystone. And there are equally crucial battles over coal and gas from the Appalachians to the Pacific coast. You can argue that the president’s people have successfully diverted attention from their other environmental sins by keeping this argument alive long past the moment at which it should have been settled and a decision should have been made.

At this point, in fact, only the thought of those 900,000 extra barrels a day of especially nasty oil coming out of the ground and, via that pipeline, into refineries still makes the fight worthwhile. Oh, and the possibility that, in deciding to block Keystone, the president would finally signal a shift in policy that matters, finally acknowledge that we have to keep most of the carbon that’s still in the ground in that ground if we want our children and grandchildren to live on a planet worth inhabiting.

If the president were to become the first world leader to block a big energy project on the grounds of its effects on climate, it might help dramatically reset the international negotiations that he allowed to go aground at Copenhagen in 2009—the biggest foreign policy failure of his first term.

But that cascade of “ifs” depends on Obama showing that he can actually stand up to the oil industry. To an increasingly disillusioned environmental movement, Keystone looks like a last chance.

Bill McKibben is Schumann Distinguished Scholar at Middlebury College, founder of the global climate campaign 350.org, a TomDispatch regular, and the author of a new book, Oil and Honey: The Education of an Unlikely Activist. To stay on top of important articles like these, sign up to receive the latest updates from TomDispatch.com here.