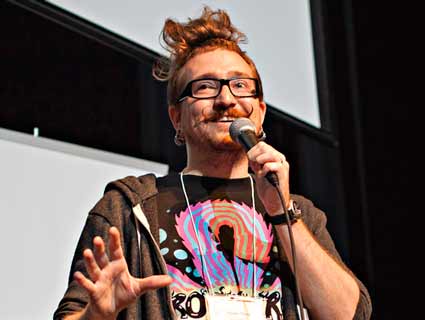 On the 23rd day, Harper Reed finally broke down. Tired of being beseeched to save Healthcare.gov, the glitchy three-week-old website designed to help people shop for health insurance under the Affordable Care Act, Reed, the chief technology officer for President Obama’s 2012 campaign (I
wrote the first national profile of his role), began compulsively retweeting requests for his assistance on matters entirely unrelated to web forms, government databases, and subsidized health care: “Hey @harper, I have 56 people I need to invite to a dinner that maxes at 50. Can you fix this?”; “Listen @harper, get Firefly back on the air. Whatever it takes”; “@harper I’m out of coffee”; “@harper Can you do anything about the fact that I hear Zooey Deschanel’s voice in every coffee shop?”; “@harper I am unable to get past Belial’s poison attack on Diablo III…help!”

Those sarcastic tweets were meant to point out that even Reed’s formidable code-wrangling skills can’t solve every problem under the sun. And by retweeting them, he was doing his part to knock down a false parallel that’s been spreading across mainstream political circles over the last two weeks. It goes a little something like this: How can the same president whose re-election campaign was widely praised for its startup ethos watch his signature accomplishment go down at the hands of a broken website?

Clay Shirky, tech’s favorite pop-intellectual, captured the zeitgeist perfectly on Monday when he contrasted the health care site with Narwhal, the campaign’s now-famous database integration project: “If Team Obama had cared a tenth as much about healthcare.gov as they did about [Narwhal] it would have worked.” Brad Feld, managing director of the Foundry Group, a leading venture capital firm, was even more direct: “Hire Harper Reed as CTO of Healthcare.gov, give him the ball and 100% of the budget, and let him run with it.”

But while the idea that all of Healthcare.gov’s problems could go away if the president just got the band back together is appealing, that line of thinking misdiagnoses the problem—and misremembers what really happened on the campaign. Obama’s tech alums say that Healthcare.gov is a vastly bigger project than anything the re-election effort had to tackle, and that the criticism ignores the advantages they had working in a sprightly campaign environment. The comparison strikes them as totally unwarranted.

“It makes my brain bleed,” says Catherine Bracy, who launched the campaign’s tech field office in San Francisco and now works as director of organizing and engagement at Code for America.

The most fundamental difference, OFA alums say, is that the re-election started from scratch. They picked and chose which software dealers they contracted with and relied on Amazon Web Services for most of their cloud computing. And when they rolled out a new product, such as the much-hyped Dashboard application for digital organizing, they did so in bits and pieces and tested it beforehand. It broke. A lot. “We would try stuff out but only we got mad when it didn’t work,” remarks Carol Davidsen, who managed the development of Narwhal and is now the CEO of cir.cl, a Brooklyn-based online marketplace.

“The ‘secret’ here is that the problems are not about tech at all.”

The former Obama techies agree that Healthcare.gov could have avoided some kinks with more strenuous pre-launch testing. But they generally think that the administration’s most ambitious technology project never had a chance. One OFA alum pegged the likelihood that a project the size of Healthcare.gov could actually be successful “in the single digits.” The Department of Health and Human Services was tasked with building a site that had to be compatible with hundreds of different health insurance providers and dozens of state databases. It was a daunting task complicated by out-of-date technology, like being entered in this year’s Daytona 500 with a Dodge Aries and a socket wrench.

The Obama campaign had another advantage over HHS: The reelection effort was essentially a private enterprise, one that didn’t have to answer to federal contracting laws. They hired whomever they wanted to run things, and then those people hired their friends to help build things.

And despite what folks like Feld say now, HHS can’t hire just anyone. The department has to comply with the Byzantine government IT procurement process that seeks to steer work to qualified vendors while guarding against the president and his appointees rewarding friends, political allies, and donors with fat contracts.

“You don’t want to live in a country where the president can get elected and then give a contract like Healthcare.gov to the CTO of his campaign, because there’s a name for that: ‘cronyism,'” says Clay Johnson, a founder of the Democratic firm Blue State Digital, which supplied tech for Obama’s 2008 campaign. “Instead, you want to live in a country where people like Harper Reed are attracted to do business with the federal government and they’re able to clearly bid on contracts that are defined by the federal government.” That’s not the way things work today.

“The first person that you need in order to start a web company would be a web developer; the first person you need to start a government contracting firm is an attorney,” Johnson says. “That’s really what it boils down to: the barriers to entry for a professional services company are way too high.” That’s how HHS ended up with CGI, a Canadian firm with deep pockets and a long (albeit mixed) government-contracting resume.

As for Reed, the teeth-gnashing over the ACA site finally compelled him to weigh in on Monday. “Excited for Ted Cruz’s statement on software development practices,” he tweeted. “He is probably a strict waterfall type. Or literally a scrum master.” Reed, who launched a startup, Lunar Technology Corporation, with three other campaign alums, did offer a bit of advice to the programmers working to patch the portal up—don’t take the site down, focus on user-experience, and make use of more open-source code—but emphasized that the issues ran much deeper. Healthcare.gov was a mammoth project, and the government couldn’t be nearly as flexible as his nimble team had been in the run up to Election Day.

“The ‘secret’ here is that the problems are not about tech at all,” he tweeted on Monday. “It is about procurement. I can’t fix that with my tech chops or my team.”

If there’s one silver lining, though, it’s this: for the first time in anyone’s memory, Washington is having a long hard talk about tech procurement. “It’s an awful catastrophe,” Bracy says. “But sometimes it takes a catastrophe like Healthcare.gov to get people to pay attention.”