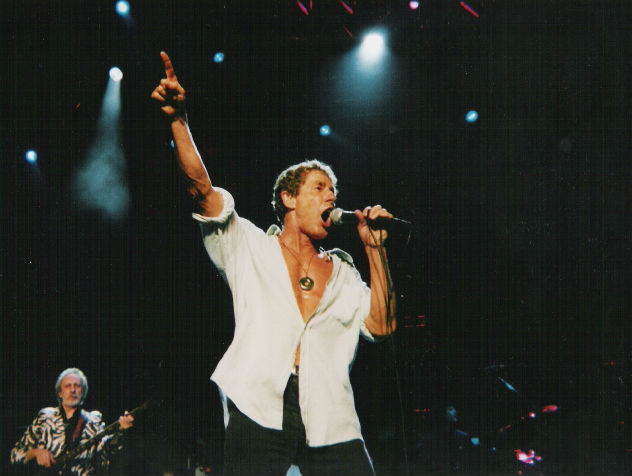 The US Capitol’s National Statuary Hall may be full of white supremacists. But tomorrow, it will also be full of Roger Daltrey.

On Wednesday, Daltrey, lead singer of legendary English rock band The Who, will perform at a ceremony honoring Winston Churchill. Secretary of State John Kerry and congressional leaders are expected to attend the event, where a bust of the former British prime minister will be unveiled.

“I am pleased to be part of the celebration of Winston Churchill and the longstanding relationship between the United Kingdom and the United States,” Daltrey said in a statement. “I am honoured to be able to show my appreciation to this great man who, as our Prime Minister, fought for and secured freedom for Britain, America, and the citizens of the world.”

You can watch the ceremony here when it streams live at 11 a.m. EDT on Wednesday. What will Daltrey sing? “A Man in a Purple Dress?” “Won’t Get Fooled Again?” “We’re Not Gonna Take It,” perhaps? You’ll have to watch to find out; Daltrey’s representatives, the Churchill Centre, and the office of House Speaker John Boehner are keeping the set list a secret until show time.

“What better way to celebrate Winston Churchill’s friendship to the United States than to have one of Britain’s most legendary recording artists perform in the halls of the Capitol,” Boehner said in a statement. “Roger’s performance is sure to guarantee that the Churchill bust receives the first-class welcome it deserves.” The Speaker’s office also posted this “teaser” video to YouTube last week, praising Churchill as the “best friend America ever had.”

The dedication ceremony—and Daltrey’s latest gig—is the culmination of Boehner’s nearly two-year effort to place a bust of Churchill in the US Capitol. In December 2011, the House passed a resolution that tasked the Architect of the Capitol with finding an “appropriate statue or bust” of Churchill. This was the fourth piece of legislation sponsored by Boehner after he became House Speaker in January 2011. Here is the resolution that Boehner submitted:

Republicans have a track record of really caring about busts of Winston Churchill. In 2009, President Obama returned to the British Embassy a Churchill bust that graced the Oval Office in the Bush era. The British press freaked out over this, and it became a conservative meme stateside that was revived in an extraordinarily dumb pseudo-controversy during the 2012 election. “This man, Winston Churchill, used to have his bust in the Oval Office, and if I’m president of the United States, it’ll be there again,” Republican presidential contender Mitt Romney said to a cheering audience at a GOP debate in September 2011.

But the bust being offered a home in Statuary Hall is refreshingly controversy-free. The Chicago-based Churchill Centre, which donated the bust, came up with the idea several weeks ago to invite Daltrey, and contacted Universal Music about bringing the rock star to the US Capitol. “He is an iconic figure in the world of British music of the past 40 years, and he responded very enthusiastically to coming over from the UK,” says Lee Pollock, the Centre’s executive director. “I don’t want to sound flippant, but [Churchill] contributed so many good things in his time, as did the British musicians of the ’60s and ’70s. They are similarly iconic, in their own rights.”

According to Pollock, Daltrey is playing the gig pro bono. He is expected to perform two songs, and to be accompanied by an acoustic guitar player, a pianist, and a local choir during the hour-long ceremony. Separately, the US Army Chorus will perform “The Battle Hymn of the Republic,” which was reportedly one of Churchill’s favorite pieces of music.

UPDATE: Here is footage of Wednesday’s event. Daltrey sang “Stand by Me” and “Won’t Get Fooled Again.” Boehner referred to Daltrey as “rock royalty.”