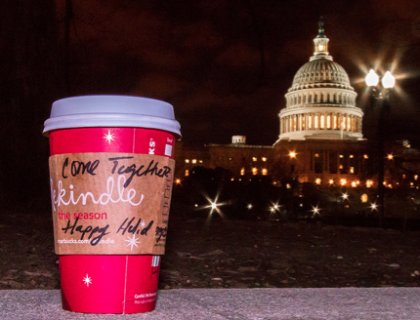 If you went into Starbucks for a soy latte this week, you might have noticed something a little unusual. In response to the debt ceiling and budgetary crisis, the coffee chain urged Americans to sign petitions asking Congress to fix these problems—without specifically proposing how. This isn’t the first time that Starbucks has dipped its corporate toe into politics. The company’s CEO, Howard Schultz, openly supported President Obama in 2012, and over the last few years, the company has turned its attention to voting rights, election donations, and sequestration—with mixed results. Occasionally, Starbucks takes a political stand that packs the same punch as a cup of strong coffee, like when it resolutely offered health care benefits to same-sex couples, filed a petition in support of overturning the Defense of Marriage Act, and progressively refused to cut worker hours or benefits ahead of Obamacare. But just as often, the company is criticized for running kumbaya political campaigns that mainly exist for Starbucks’ bottom line.

“One of the enduring fantasies of the pundit class…is that all we need to fix our economic problems is to get the great and the good together and bypass those pesky elected officials,” Paul Krugman wrote of Starbucks’ 2012 debt ceiling campaign. “But the reality is that the business leaders intervening in our economic debate are, for the most part, either predatory or hopelessly confused…Howard Schultz, the CEO of Starbucks, exemplifies the hopeless confusion factor.” Zack Hutson, a spokesman for Starbucks, tells Mother Jones that “Starbucks is not a policymaker…but we do believe we can bring people together to make their voices heard.”

Here are six Starbucks campaigns that failed to live up to the hype:

1. The Pay It Forward Campaign
Last week, if you bought the customer behind you a cup of coffee, Starbucks might have given you a free cup, as part of its three-day long “Pay it Forward” campaign. This was intended to help solve the debt ceiling and budget crisis by sparking a “connection that helps bring us all a little closer at a time when showing our unity is so important.” Starbucks also placed petitions in 11,000 US stores, asking Congress to reopen the federal government, avoid default, and “pass a bipartisan and comprehensive long-term budget deal.” Hutson says the company is not offering a specific solution as to how those things should be accomplished, noting that Starbucks wants to “work through our elected leaders [and] encourage the kindness and civility we want our elected leaders to model.” The petitions will be delivered to Congress and the President today.

Marshal Cohen, chief retail analyst at the NPD Group, which does consumer market research, told the Associated Press that the Starbucks campaign doesn’t have any demands attached to it, like impeachment, so it’s unlikely to make any difference. “Will it work on the political level? No. Won’t make a dent. Will it work on the commercial end? Absolutely.”

2. The 2012 “Come Together” Campaign
In December 2012, the US government was on the verge of teetering off the “fiscal cliff”—when brutal, across-the-board spending cuts, designed to force a deal on decreasing the US deficit, would hit various federal programs. In response, Starbucks launched the “Come Together” campaign—inspired, somehow, by donations made to Sandy Hook Elementary School. According to Starbucks CEO Howard Schultz, the campaign aimed to send “a respectful and optimistic message to our elected officials to come together and reach common ground on [the fiscal-cliff] issue”—by asking baristas to write “come together” on Starbucks paper cups. Paul Krugman said Starbucks didn’t seem to understand the economics of the fiscal cliff. And many customers were confused: 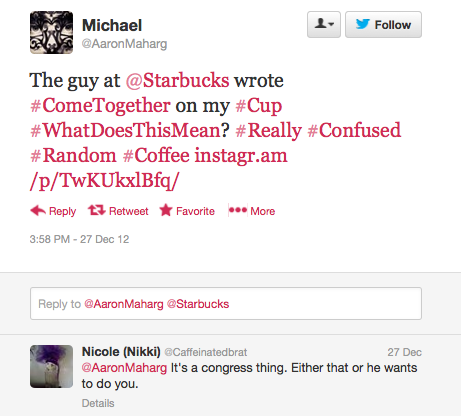 Starbucks directed customers to learn more about the issue by visiting “Fix the Debt,” a group that, according to the Washington Post, pushed for “higher tax revenue, lower government spending, and cuts to Social Security and Medicare and was criticized for masking its conservative backing and attempting to drive money to the 1 percent.”  Hutson says that Starbucks wasn’t “advocating for a specific policy solution with Fix the Debt” but notes that “we are supportive of the campaign’s aspirations for a meaningful, long-term, bipartisan solution.”

On January 1, 2013, the United States narrowly averted the fiscal cliff, but failed to reach a long-term budget deal, essentially kicking the can down the road.

3. The “Leading Through Uncertain Times” Campaign
Long before the government shutdown crisis, and the 2013 debt ceiling crisis, and the sequestration crisis, there was the 2011 debt ceiling crisis. That was the first time Republicans threatened President Obama with default if he did not make budgetary concessions. In response, Starbucks went ahead with a campaign to get business leaders to pledge not to donate to any political campaigns until Washington came up with a long-term deficit deal, garnering support from over 100 business leaders. Some saw it as a galvanizing step in the right direction, but critics pointed out that the campaign didn’t explicitly bar donations to super-PACs, which is where a lot of the big money comes from, and Starbucks employees and shareholders (excluding Schultz) didn’t abide by the pledge. Starbucks investors also rejected a shareholder proposal to stop the company from making political contributions, forming its own political PAC in the future, and donating money to lobbying industry groups.

“This was an awareness building campaign, since we have 70 million customers a week coming through our stores,” says Hutson. But Starbucks has no plan on establishing a super-PAC in the future, and, he says, “as a company we rarely make political campaign donations.” After the campaign, Congress failed to come up with a long-term budget deal, setting the stage for the 2013 crisis.

4. The Anti-Gun Stance
This was less a campaign, and more a political intervention. Following several incidents where customers brought guns into Starbucks and accidentally discharged the weapons—as well as pressure from gun control groups like the Brady Campaign to Prevent Gun Violence—Starbucks decided to take a stand on gun control. Sort of. This fall, Starbucks changed its official policy to one that asks customers to leave guns at home, even in states with open carry laws. However, Schultz told the New York Times that Starbucks was not going to actually ask gun-toting customers to leave, nor post signs in the store explaining the new policy. “I don’t think we need to post signs. The respectful request has been made clear and people are abiding,” Hutson says, but he admits there’s also no way to measure for sure whether more people are leaving their guns at home.

“We appreciate the fact that Starbucks realizes the problem that armed patrons present to the safety of other customers in their stores, but do not believe that their initial steps of discouraging guns in their stores goes far enough,” says Robyn Thomas, executive director for the Law Center to Prevent Gun Violence. “Starbucks could easily ban guns in their stores by simply posting a sign which lets customers know that guns are not allowed and then enforcing that rule as do other chains like Peet’s Coffee and Tea, California Pizza Kitchen, and Disney.”

5. The Free Coffee for Voting Campaign
Before the 2008 election, Starbucks released this ad, with the slogan, “If you care enough to vote, we care enough to give you a free cup of coffee,” set over a sweeping piano score. The offer was redeemable on November 4. Starbucks was hardly the only store making the offer; Krispy Kreme, Chick-fil-A, and Ben & Jerry’s offered free swag too. But Starbucks revoked its offer after reports surfaced that the deal could violate election laws, deciding instead to give out a free tall brewed coffee to anyone who asked for it. Those pesky election laws didn’t stop other companies from offering free stuff to Americans who flashed an “I Voted” sticker. That’s probably because, as Slate pointed out, the Department of Justice was unlikely to do any prosecution. 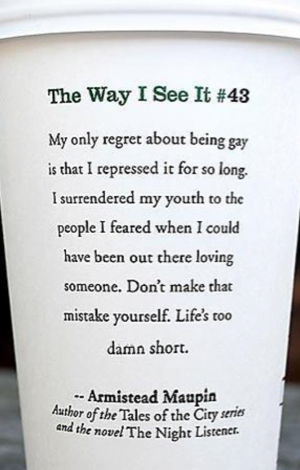 The quotes drew ire from conservative groups, but some atheist groups were also peeved with one cup’s anti-evolution message. Starbucks spokeswoman Audrey Lincoff told the Seattle Times that the campaign did not set out to take a political stand, and it didn’t matter whether the people quoted on the cups were Democrats or Republicans. Starbucks considered the campaign “successful” but quietly disbanded it after two years, because “we redesigned our logo and subsequently the cups,” says Hutson. Today, there’s scant evidence on its website that “The Way I See It” ever existed.