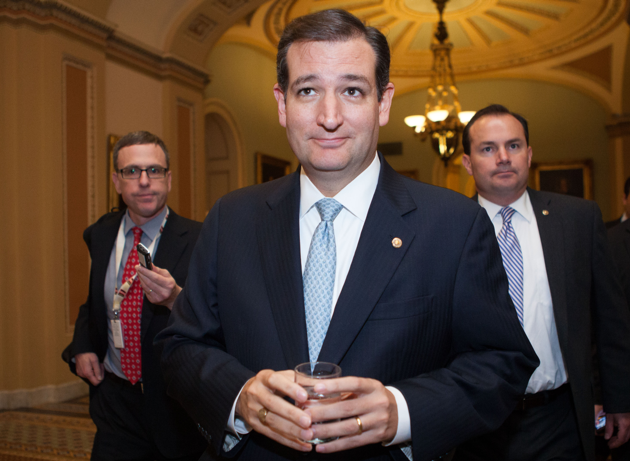 Sen. Ted Cruz (R-Texas) has compared his fight to defund the Affordable Care Act to the fight against Nazi Germany. He sees it as his duty to provide “relief to the millions of people who are hurting because of Obamacare.” The uninsured in his own state will tell you a different story.

Stacy Anderson, from Fort Worth, runs her own business selling sweaters online. She says she has not had health insurance for the past seven years because the sweater business is not too lucrative. “It cost more than I made some months,” she says. Anderson says she was just diagnosed with skin cancer, though it is not life-threatening. “I’ve had it, apparently, for the entire seven years I’ve been uninsured,” she says. “It will be nice if I can buy health insurance and get it treated.”

Jeffrey Coffey is a 49-year-old from Austin who earns a living as a musician. He says has insurance, but notes that the $361 monthly premium is “way expensive” on his $22,000 salary; he says he pays more because he has asthma. Coffey says he applied for cheaper plans numerous times this year, but was turned down. “Getting rejection letters is depressing,” he says. When Coffey buys insurance on the exchange, he estimates he will able to get coverage for $160 a month, a $200 savings. “But so far I haven’t been able to log on to the website,” he adds.

Andrew (who prefers his last name not be used) is a BFA student at Texas State University in San Marcos. He’s in his mid-30s and has gone without insurance for years because it’s too expensive. He has also avoided doctors for fear that he’d be diagnosed with a chronic condition, and insurance companies would “blacklist” him when he finally applied for coverage. Andrew says he no longer has to worry about that when he signs up for insurance through the exchanges this month. Andrew and his wife, a pre-K teacher, want to have a baby soon, and he says that Obamacare makes it “much more affordable for us to plan when and where we will start a family. I no longer need to worry that, god forbid, if one of us gets sick, we will be dropped from our insurance.”

3.5 million uninsured Texans will finally get coverage under Obamacare. (One million more could have been covered if Gov. Rick Perry had agreed to the law’s expansion of Medicaid.) Texas has the highest percentage of uninsured citizens in the country; of the 25 million people in Texas, one in four don’t have health insurance coverage.

Here are some other ways Texans are already benefiting from Obamacare:

Rep. Gene Green (D-Texas), who helped draft the healthcare law, and represents the Houston area, which is home to some 1.4 million uninsured, says Obamacare is essential in Texas. “Although Houston has some of the best hospitals in the world,” he said earlier this year, “The area where I grew up and now represent has one of the lowest rates of adequate health insurance for adults in the entire nation. This law has helped remedy this for communities like ours across the entire US and that’s a great accomplishment.”

But there’s no guarantee that Obamacare will continue to benefit Texans. Perry and other GOPers in the state have done everything they can to block implementation of the law, including refusing to set up state-run health insurance exchanges. For now, Lone Star state residents have to sign up for coverage through the federal government’s buggy, rickety website. If too few uninsured people sign up for health plans in a state with such a huge, hard-to-reach uninsured population, insurance prices could rise around the country and stymie the success of the law nationwide.

That’s why the Obama administration and proponents in Texas are doing everything they can to get people enrolled. The administration sent Texas nearly $11 million—more than any other state—to pay navigators, the grassroots workers who help people enroll in the health plans. In Houston, city officials are modeling their efforts to enroll people on the exchanges on the emergency response systems they use in case of a hurricane or public health disaster.

But for now, the biggest thing that could help Obamacare’s roll-out in Texas is an insurance exchange website that works: “I would just like to be able to sign up,” Texas resident Alexandra Bonifield said on Facebook. “Fix it, please.”