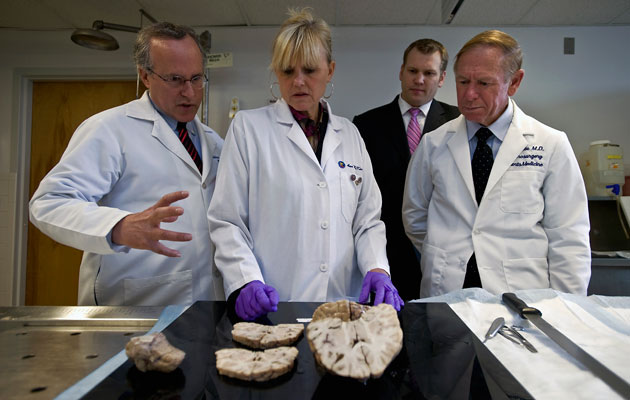 Researchers examine the brain of a dead ex-high school football player who died in his 20s.Brian Cahn/ZUMA

Both ESPN the Magazine and Sports Illustrated published excerpts today from Steve Fainaru and Mark Fainaru-Wada’s League of Denial, their much-anticipated investigation into the NFL’s efforts to downplay football’s link to devastating brain trauma. The book, which comes out next Tuesday, takes a look at the Big Tobacco-like tactics the league used over two decades to allay public concerns about concussions and long-term injury.

Here are three ways the Fainaru brothers argue that the NFL attempted to downplay the risks of the game:

1. Cherry-picking data in NFL-sponsored research: At a 2007 concussion summit meant to update new commissioner Roger Goodell, neuropsychologist Bill Barr, who had worked for the New York Jets, blasted the NFL’s Mild Traumatic Brain Injury (MTBI) committee for using only select data in a study that concluded that NFL players were quick to recover from concussions:

“I said that the data collection is all biased,” Barr said. “And I showed slides of that. Basically I pointed out that we had been obtaining baselines on players for 10 years, and when you look at the study it only included a small amount of data. My calculations were that their published studies only included 15 percent of the available data. Let’s put it this way: There were nearly 5,000 baseline studies that had been obtained in that 10-year period. And only 655 were published in the study.”

2. Co-opting a reputable journal to publish questionable research: After the creation of the MTBI committee, the NFL used the influential medical journal Neurosurgery (whose editor in chief consulted for the New York Giants and whom “some people around the NFL also considered…something of a jock sniffer”) to publish its work:

The league used that journal, which some researchers would come to ridicule as the “Journal of No NFL Concussions,” to publish an unprecedented series of papers, several of which were rejected by peer reviewers and editors and later disavowed even by some of their own authors. The papers portrayed NFL players as superhuman and impervious to brain damage. They included such eye-popping assertions as “Professional football players do not sustain frequent repetitive blows to the brain on a regular basis.”

3. Blasting independent researchers: After neuropathologist Ann McKee (subject of a terrific 2012 Grantland profile) told reporters in 2009 that the brain of a dead 45-year-old ex-NFL player named Tom McHale looked like that of a 72-year-old former boxer—adding, “I have never seen this disease in the general population, only in these athletes”—she got a call from Ira Casson, co-chair of the MTBI committee, who wanted her to travel to the league’s New York City offices to present her work. The meeting was antagonistic:

To many in the room, Casson seemed especially combative. “Casson interrupted the most,” said Colonel Jaffee [the national director of the Defense and Veterans Brain Injury Center]. “He was…at times mocking. These were pretty compelling neuropathological findings, so to outright deny there could be a relationship, I didn’t think [Casson] was really making an honest assessment of the evidence.”

…McKee had experienced heated debate before, but this, she thought, was almost personal. “I felt like they weren’t really listening,” she said, “like they had their heads in the sand.” Casson, Pellman and others bombarded McKee and Perl with alternative theories: steroids, nutritional supplements, high blood pressure, diabetes. Finally McKee threw up her hands. “You are delusional,” she told them.

A PBS Frontline documentary, also called League of Denial, will air Tuesday at 8 p.m. EDT. (It is the result of a yearlong collaboration between ESPN, where the Fainaru brothers work, and Frontline—a joint project that ESPN recently pulled out of, allegedly due to NFL pressure.) Here’s the trailer: