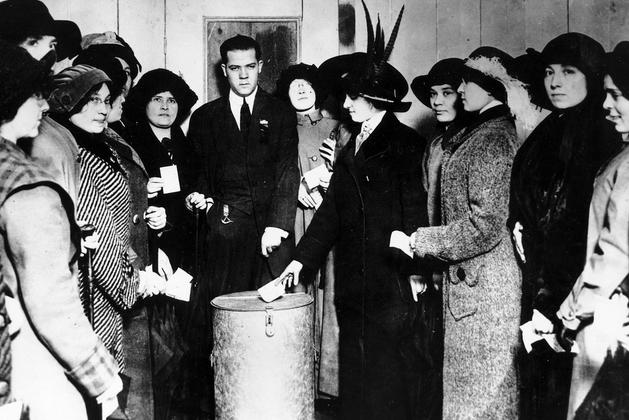 Women have been allowed to vote in the United States since 1920, after the passage of the 19th Amendment. But fast-forward to 2013, and plenty of states’ laws have a provision that makes it harder for women who are married or divorced to cast a ballot.

When Americans all over the country head to the polls on November 5 to vote on mayoral candidates, ballot initiatives, gubernatorial races, and even members of Congress, they will be up against a new kind of voter ID law that has mostly cropped up in 2012 and 2013 and disproportionately affects women—as well as transgender voters and anyone else with a name change.

Controversial voter ID laws, which GOP proponents say are intended to prevent the (pretty much nonexistent) crime of voting fraud, are nothing new, and they have been criticized for targeting low-income voters, young people, and minorities. But Texas’s newly enforced voter ID law has put a spotlight on another group of voters that will be disproportionately affected by these rules. Not only must Texas voters present government-issue photo IDs to vote, but now poll workers are required under the law to check these IDs against an official voting registry to determine if the two names “substantially” match. That means that a woman who updated her voter registration when she got married, but not her driver’s license or passport (and vice versa), could face additional hurdles in getting her ballot counted.

The Texas law may have drawn extra scrutiny because of the state’s reputation for being a battleground in the “war on women”—but it’s just one of many to adopt this type of provision. At least 9 other states’ voting laws, most enacted in 2012 or 2013, use similar language. That doesn’t count the 24 additional states with other kinds of voter ID laws, including some with looser photo ID rules that are still potentially problematic for women. In 2006, the Brennan Center found that 34 percent of voting-age women do not possess a proof-of-citizenship document that reflects their legal name, although updated statistics on photo IDs are hard to come by. And Slate points out that the law doesn’t just affect Democrats, as Republican women are more likely change their names.

“We need Americans to understand that even though this particular ‘war on women’ isn’t out in the light, women are quietly being disenfranchised in the dark—they just might not know it yet,” says Judith Browne Dianis, codirector of the the Advancement Project, a civil rights organization.

Voter ID laws can be sorted into three categories—ones that require non-photo ID, like a bank statement, ones that require a photo ID (usually government-issued); and ones that require photo ID and include language about how the name on that ID must match the name in the voter registration database (like Texas). Here’s a map showing all of these categories and whether or not the laws are in place for this upcoming election. (For even more in-depth information on your state, head over to the National Conference of State Legislatures.)

In every single one of these states, minorities, low-income voters, and young people—who tend to vote Democratic and are least likely to have up-to-date identification—are targeted. But married or divorced women who have changed their names are also affected in the states above that require photo identification—since the name on their ID, which women often wait to update until it expires, has to match their voter registration. The Advancement Project’s legal team told Mother Jones that the states that require poll workers to check the voter registration list for a match make it the most difficult for women, since poll workers have more explicit legal instructions.

Regardless of what’s on the books, interpretation is largely left up to the poll workers, who have a lot of power over whether someone gets a ballot. In less strict states, for example, poll workers can choose to have someone sign a sworn affidavit rather than show ID. In Texas, if the voter registration list reads “Jane Smith” but the woman’s ID says “Jane Doe Smith”—then that qualifies as a “substantial match” and the voter only has to sign an affidavit swearing to his or her identity for her vote to be counted. But if Jane’s ID still has her maiden name, “Jane Doe,” and the poll worker isn’t sure, the ballot will only be counted if, within six days, Jane can dig up a $20 marriage or divorce certificate and find time to get a new ID that matches the name she registered with. (In Dallas, poll workers have been bending the rules so that voters can re-register under their married names.) Pennsylvania also gives six days to obtain a new ID, and Mississippi only gives five.

These scenarios aren’t merely hypothetical. In 2011, a 96-year-old Georgia woman was denied the right to vote because she didn’t have her marriage certificate. And in Pennsylvania, the state’s ID law is on hold until a pending lawsuit is resolved. One of the plaintiffs is a woman who couldn’t vote because her marriage certificate was in Hebrew, and she couldn’t get a new ID that reflected her changed name, thus, her name didn’t match the voter registration list. (Women who obtained common law marriages could have similar problems.) Another plaintiff is a transgender man who presented both a driver’s license and passport, but was rejected because of his photograph.

“Voter ID laws discriminate against trans communities and many marginalized communities who struggle to obtain access to consistent, accurate and updated identity documents,” says Sasha Buchert, staff attorney at the Transgender Law Center. “Often there are huge barriers for updating documents.” In Texas, for example, a transgender person needs to bring a court order to the DMV.

For those heading to the polls, Kelly Ceballos, a spokesperson for the League of Women Voters, says the most important thing is for voters to get educated—Texas, for example, is reducing or eliminating the cost of getting a birth certificate copy in some counties—and not get discouraged. “It is important to participate in the democratic process and the way to do that is to go to the polls and cast a ballot,” she says.

Judith Browne Dianis hopes that women voters will start realize that “you’re being disenfranchised because you weren’t paying attention. Maybe you thought this was something that was just affecting people of color, or low-income people, but it’s impacting your voice and your ability to participate on the issues that matter to you.”

For more data on voter ID laws and who they affect, click here.