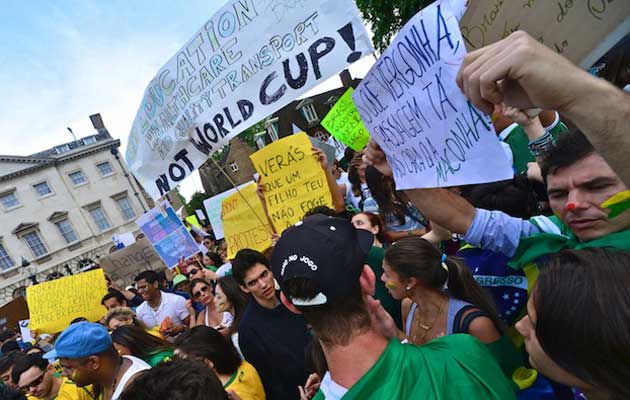 Last week, the Guardian published a report into the slavelike conditions of Qatar’s World Cup construction projects. Detailing the tragic deaths of 44 Nepalese migrant workers and the squalid conditions of thousands more prepping for the event in 2022, the Guardian‘s reporting has rightfully drawn the attention of the international community. But labor relations aren’t the only issue in Qatar—and the Middle Eastern state is far from an exception among World Cup hosts. In fact, all three of the next Cup locations have been widely criticized for human rights and inequality issues.

Here are some of the more egregious examples:

Last week, a Brazilian government investigation into the Sao Paulo Guarulhos International airport expansion project—set for completion before next year’s World Cup—revealed more than 100 workers living in “conditions analogue to slaves.” According to the BBC, while workers were promised $625 a month in wages, some had paid more than $220 just to secure a job. Many more were forced into makeshift camps near the airport while waiting for their employment to begin.

A local official preemptively suggested the $240 million 44,500 seat Arena da Amazonia be repurposed as a prison.

In addition to labor concerns, there’s also the question of what to do with all the new infrastructure after the event is over, when operational costs and low returns could leave Brazil’s stadiums like South Africa’s unviable “White Elephants.” (There, the government only recovered a tenth of its World Cup investment.) According to one report, a local official preemptively suggested the $240 million 44,500 seat Arena da Amazonia be repurposed as a prison. Of course, that’s assuming a soccer stadium can be maintained at all in a rainforest climate, where humidity and sun can buckle steel and melt the color off seats.

All this poor planning and waste only serves to underscore Brazil’s staggering economic disparity. While Brazil has quickly become the sixth-largest economy in the world, its distribution of wealth is one of the worst in the world, meaning most of that money is going to people at the top. This past June, the “Services Not Soccer” protests questioned spending some $13.3 billion on the 2014 World Cup and $18 billion on the Rio 2016 Olympic Games—especially with Brazil struggling to deal with big issues like health care, education, and political corruption. Now, the stadium development is forcibly evicting people from slums and raising ticket prices, driving out the poor and working-class fans whose money previously kept struggling soccer clubs alive.

In many ways, the 2014 Winter Olympics in Sochi, Russia, will act as a litmus test for how international LGBT athletes and advocates are treated under the country’s harsh anti-gay law. If Mother Jones‘ previous reporting is any indication, the results could be alarming.

In 2012, Zenit St. Petersburg fans wrote an open letter claiming that gay players were “unworthy of our great city.”

Russian soccer has also been criticized for its inability to fix hooliganism and racism. In 2011, Brazilian soccer player Roberto Carlos had a banana thrown at him within months of joining Russian FC Anzhi Makhachkala. In 2012, his Congolese teammate Christopher Samba received similar treatment. Two years earlier, Alexey Sorokin, then-director of the Russian Football Union, defended several fans who put a banana on a banner to taunt Peter Odemwingie, claiming the banana as Soviet slang with “nothing racial in it.” A leader in Russia’s World Cup bid, Sorokin is now the appointed CEO of the 2018 World Cup Local Organizing Committee. According to the BBC, right before FIFA chose Russia to host the Cup, the Russian Football Union released a memo and announced a website to combat racism. Notably, the site is still offline. And in 2012, Zenit St. Petersburg fans wrote an open letter claiming that using “dark-skinned players” only “brings out a negative reaction” and that gay players were “unworthy of our great city.”

As with the Sochi Olympics, unexpected costs have plagued the 2018 World Cup. The cost of updating transportation, building and renovating stadiums, and ensuring infrastructure and events run smoothly for the entirety of the Cup is now over $20 billion, twice as much as previously projected. Part of the problem? Hosting games in remote cities like Saransk, where the only flight from Moscow is on an overnight propeller plane and the city’s primary achievement is as a onetime center of the Gulag prison system. These costs, combined with the $50 billion price tag of the Olympic games, could make a heavy dent in Russia’s near-zero-growth economy.

Qatar’s treatment of migrant workers has long been a problem. Prior to the Guardian investigation, Human Rights Watch called out Qatar’s exit visa system and employment sponsorship system. Both require a resident to vouch for a worker’s ability and can effectively prevent a migrant from starting work, finding housing, or even leaving the country. Within World Cup construction sites, thousands of workers have spoken out about confiscated passports and visas, cramped living situations (up to 20 people in a single room), and forced labor in desert heat without food or water. (Don’t worry, fans and players: Organizers are mulling a massive air-conditioning system for you.) These conditions led to the death of 44 Nepalese workers from June 4 to August 8 alone.

Three years ago, when asked what gay fans should do in Qatar, FIFA president Sepp Blatter said, “They should refrain from any sexual activities.”

Altogether, current estimates for Qatar’s World Cup facilities, transportation, air conditioning, and construction of an entirely new city come in at a whopping $220 billion, approximately 1.3 times the country’s total annual GDP. While Qatar’s GDP is undeniably large for its size, that’s 60 times what South Africa spent on the 2010 World Cup. Note: The richest Qataris make as much as 13 times more than the poorest.

Homosexuality is also illegal in Qatar, and foreigners have previously been whipped, imprisoned, and deported as punishment. Since Shariah law is effect, Qatari Muslims could theoretically be executed for homosexuality. Three years ago, when asked what gay fans should do in Qatar, FIFA president Sepp Blatter said, “They should refrain from any sexual activities.” Now, FIFA is reported to be pressuring Russia and Qatar to relax anti-gay laws during the World Cup, but with the games still several years away, a decision may not come anytime soon.

In the meantime, there have been some rumblings about moving the event, maybe even to the United States. Unfortunately for US soccer supporters (and perhaps migrant workers and gay fans), the relocation dream remains just that.