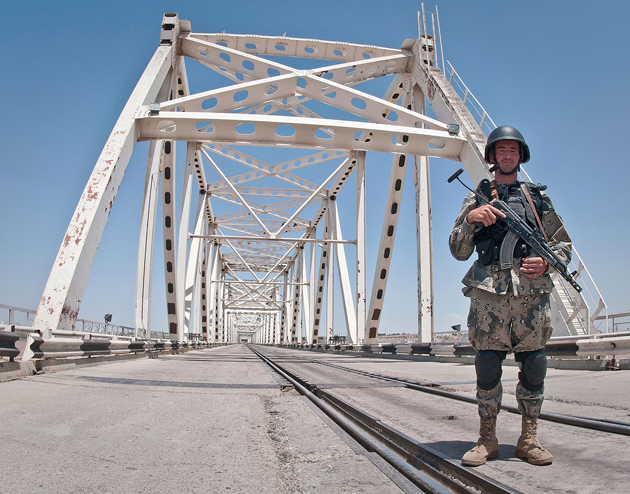 The United States and Afghanistan are close to finalizing a deal that would set guidelines for the two countries’ relationship after 2014, when the bulk of American forces are supposed to leave the country—more than a dozen years and hundreds of billions of dollars later.

The New York Times reported Tuesday that Secretary of State John Kerry and Afghan President Hamid Karzai had reached tentative agreement on one of the last remaining holdups preventing a long-term deal: whether American forces could continue to raid Afghan homes during security operations. The new agreement would prevent American-led raids except under “extraordinary circumstances,” but it’s not yet clear that the deal will pass the Loya Jirga, a body of Afghan elders. The raids, among other issues, have created deep mistrust between American forces and the Afghan people.

If a deal is reached, US forces could remain in the country at least another 10 years in some fashion, committing taxpayers to spending millions more on security and nation-building projects. So far, many of those projects have been undermined by corruption and dysfunction. Here are a few examples of US investments in Afghanistan that have already either fallen apart or show little signs of lasting success:

Hospitals
At least 19 of the hospitals built by the international community—including two US-funded facilities that cost nearly $20 million—may be too expensive for the Afghan government to run.

Counternarcotics Aircraft
The Pentagon has invested $770 million for nearly 50 planes to patrol the countryside for opium poppy and hashish fields. But the Afghan government can’t afford the $100 million annual overhead—nor does it have enough qualified pilots to fly the aircraft.

Power Grid
With two-thirds of Afghans lacking regular access to electricity, the United States has spent more than a billion dollars beefing up the country’s power grid. But according to the Special Inspector General for Afghanistan Reconstruction (SIGAR), the state-run power company may not be able to pay its bills after 2014, when US funding expires. Meanwhile, the US Agency for International Development recently gave the utility control of the construction of a hydroelectric dam in a restive section of Helmand province—a project 29 Marines died to make possible. As the Los Angeles Times reported, there are doubts about the “utility’s competence and experience, as well as the government’s commitment to a project that insurgents have violently opposed.”

Roads
The United States spent $1.7 billion on road and bridge building from 2002 to 2007, but some of the projects have already started to fall apart, “mainly because of the poor quality of initial construction, poor maintenance, and overloading,” according to SIGAR.

Schools
More Afghan children are being educated than ever before, thanks to international development efforts. But the Afghan government won’t be able to operate all the new schools, especially as international personnel and aid trickle out of the country. “Of course we built too much,” one British official told the Guardian. “We didn’t think about how the Afghans would pay for it…We wanted to show them what we could do for them, but without regard for sustainability.”

All in all, military operations in Afghanistan have cost nearly $700 billion. That’s still less than the United States spent fighting in Vietnam, but it’s still a major chunk of the more than $1.6 trillion spent on the Afghan and Iraq conflicts since September 11. 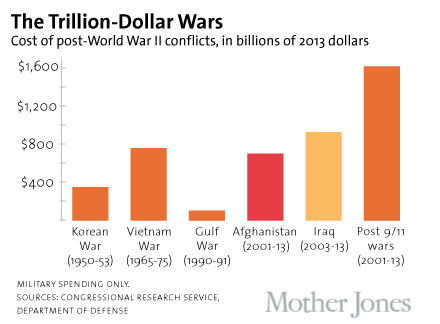