Last month, Dick Metcalf published a column in Guns & Ammo cautiously explaining that gun enthusiasts should not necessarily oppose all limits on firearms ownership. “I don’t think that requiring 16 hours of training to qualify for a concealed carry license is infringement [of the Second Amendment] in and of itself,” Metcalf wrote. “But that’s just me…”

The veteran firearms writer and his editor, Jim Bequette, thought that the article would “generate a healthy exchange of ideas on gun rights,” as Bequette later put it. Instead, it “aroused unprecedented controversy” among the gun rights crowd, Bequette acknowledged last week in a groveling apology to his readers. He went on to announce his resignation and Metcalf’s firing. 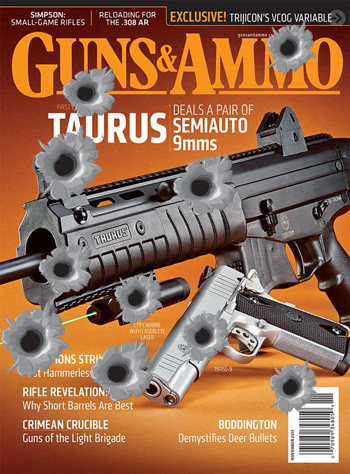 Over the next few days, Metcalf received a torrent of calls from reporters but refused to talk to any of them. Major media outlets were seizing upon his termination as the latest example of how intolerance and extremism runs rampant among today’s firearms enthusiasts, and that was not a story that Metcalf wanted to tell.

On Friday, Metcalf finally spoke out, choosing to publish a letter in Outdoor Wire, a pro-gun newsletter that covers “the outdoor industry.” Its editor handled the letter as if it was radioactive: “For the record I disagree totally with what he suggested,” he wrote in an introduction, “but believe Metcalf deserves the opportunity to respond.”

While coverage of Metcalf’s firing focused on the outrage of Guns & Ammo readers, Metcalf’s account in Outdoor Wire suggested that another force ultimately was responsible for his ouster. Initially, Guns & Ammo and its parent company, IMO, asked Metcalf to lay low and “wait and see how the situation developed,” he wrote. But a few days later the magazine’s advertising revenues were in jeopardy: “IMO was contacted by two major firearms industry manufacturers, stating that they would do no further business with IMO if it continued with its present personnel structure. Within hours, Jim Bequette resigned as editor of Guns & Ammo, and my relationship with all IMO publications and TV shows was terminated.” (It remains unclear which gun companies drew a bead on IMO.)

In an interview on Sunday with Tom Gresham’s Gun Talk radio show, Metcalf pointed out that similar columns he’d penned in the 1970s and 1980s for Shooting Times hadn’t sparked anything close to such a controversy. “We expected we would generate a conversation,” he said. “We didn’t think we were going to incite a riot.”

To be sure, a lot has changed in the pro-gun movement since the ’70s and ’80s, as those who’ve covered firearms well know. In 2007, Jim Zumbo, a writer, gun rights activist, and Outdoor Channel TV personality, saw his career destroyed after he referred to assault rifles as “terrorist rifles,” saying: “Maybe I am a traditionalist, but I see no place for these weapons among our hunting fraternity.” And last year, Jerry Tsai, the editor of Recoil Magazine, was forced to concede that he was “truly sorry” for writing that the MP7A1—a submachine gun that’s designed to penetrate body armor—should not be made available to civilians.

In his Gun Talk interview with Metcalf, Gresham alluded to why the gun lobby hews to such a virulent strain of Second Amendment fundamentalism these days. “There traditionally has been in the gun world some folks who say, gee, can’t we have a conversation, and maybe we can find some middle ground,” he told Metcalf. “But traditionally what has happened is we end up giving something up, and the gun banners get something. That’s their form of compromise. They don’t get everything they want, but we are losing step, by step, by step.”

Metcalf disagreed, pointing to the spread of concealed carry laws. “The only way we could get what we got [in Illinois]—the only way we could get a ‘shall issue’ carry law—was to hammer out what in the days before the civil war was called a compromise.” This year, Illinois was the last of the 50 states to allow concealed-carry permits, which have become ever more easy to obtain.

The Guns & Ammo dust-up reflects a deep-seated insecurity beneath the tough talk of the gun rights movement: the fear that any ideological impurity will be taken as a sign of weakness. Metcalf says he sees this kind of paranoia as a vulnerability of the movement, but it has been methodically hammered into gun owners by the industry’s biggest cheerleaders. As the National Rifle Association’s Wayne LaPierre put it again recently with regard to US regulation of civilian firearms: “On this there can be no compromise, as American gun owners will never surrender their Second Amendment freedoms.”