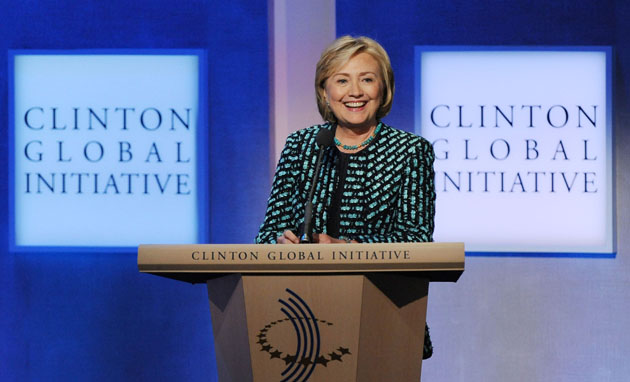 In the spring of 2008, when Hillary Clinton and Barack Obama were nearly tied in the Democratic presidential delegate count after the first slew of primaries and caucuses, an obscure provision of the nomination process suddenly became fodder for pundits to predict the outcome. “Forget hanging chads or swift boating; the buzzword this election cycle is ‘superdelegates,'” US News and World Report wrote during the height of the campaign.

Those superdelegates—796 current and former Democratic politicians who could have brokered a deadlocked convention—were an afterthought in the end, as Obama secured a clear majority of delegates from the primaries and caucuses. But this time around, perhaps to preserve their relevance, some of those superdelegates are jumping in early to sway the race in Clinton’s favor before it even starts—and before HRC even declares an intention to run.

The Iowa caucuses are still more than two years away, but nearly every prominent Democratic politician has already endorsed Clinton, rushing over each other to effusively praise the would-be president and offer their full-throttled support. Seemingly every recognizable figure—save Vice President Joe Biden, New York Gov. Andrew Cuomo, and Maryland Gov. Martin O’Malley, all toying with their own 2016 campaigns—has attached him or herself to Clinton.

Here’s a brief rundown of political heavy-hitters who have offered their unconditional support to Clinton long before she’s made a commitment to run.

Harry Reid
“She would be very, very good,” Reid said earlier this week. “I would be very happy to see her run.” That wasn’t the first time Reid praised a potential Hillary presidency. In July he told PBS NewsHour that she’d be even better at the job than her husband. “Hillary Clinton may have a bigger fan than Harry Reid; I just don’t know who it would be,” he said. “I think that what she did as a senator, what she did as secretary of state will go down in history books as a remarkable, remarkable job that she did.”

Nancy Pelosi
The former House speaker, herself a glass-ceiling breaker, sat out the endorsement game during the 2008 primaries. She likely won’t be so quiet in 2016. She was on the Clinton bandwagon way back in June of 2012. “Why wouldn’t she run?” Pelosi said in an interview before Obama had even been reelected. “She’s a magnificent secretary of state. She’s our shot.” Pelosi’s enthusiasm hasn’t been tempered during Obama’s second term.

In May: “I pray that Hillary Clinton decides to run for president of the United States.”

In July: “I think the country is ready for Hillary. I certainly hope that she will choose to run. I think if she does, she will win.”

Sen. Elizabeth Warren, Sen. Kirsten Gillibrand, and the 14 other female Democratic senators
All 16 Democratic women in the Senate signed a secret letter to Clinton back in February urging her to go for the presidency again in 2016. That letter remained private until late last month, when Sen. Kay Hagan (D-N.C.) mentioned it at an EMILY’s List event in New York.

“I have repeatedly said—publicly, privately and in writing—that Hillary Clinton should run for president in 2016,” Sen. Barbara Boxer (D-Calif.), the apparent organizer of the letter, said after its existence became public.

The list of endorsees is especially notable because it could rule out the presidential hopes of several would be challengers. Gillibrand’s (D-N.Y.) name had been bandied about thanks to her growing role in the caucus and her ties to the Wall Street funding machine. But Warren’s (D-Mass.) signature was perhaps the biggest surprise. She’s a darling of the liberal base—enemy of the banks, agitator for the little guy—and liberals had pinned their hopes on her as the best Clinton alternative in 2016.

Sen. Chuck Schumer
A fellow New Yorker, the third-ranking Senate Dem endorsed Clinton’s presumed candidacy last weekend, and he did so with gusto. “Run, Hillary, run,” Schumer said at a gathering of Iowa Democrats. “If you run, you’ll win, and we’ll all win.” Not only does Schumer guarantee a Clinton win, he sees her presidency somehow reshaping the entire Democratic Party. “With a strong platform and with Hillary leading the charge, we will vanquish the Ted Cruz, tea party Republicans in 2016 and create a generation of Democrats who will make sure the middle class gets what it needs, our country advances and the torch held by that beautiful lady in New York’s harbor burns more brightly than ever.”

Chicago Mayor Rahm Emanuel
The former Obama chief of staff stayed mum during the 2008 contest, torn between his allegiance to the Clintons (he worked in Bill’s White House) and his support for his fellow Illinois pol. This time there’s no doubt about whom he’d back. “I’m behind Hillary if she runs,” he said in October. “And I think she will, but that’s up to her. If she runs, I’m in.”

Wesley Clark
The former general, a lackluster presidential aspirant in 2004, gave Clinton his endorsement back in June. “Supporting Hillary is an easy decision for me,” he said. “I know she’ll steer us straight at home and represent us right abroad. We all know that Hillary would make the best president for our country.”

Jennifer Granholm
The former Michigan governor might be popular among the Democratic base, but she can’t run for president herself since she was born in Canada. No worries though—she’s channeled the energy from her buoyant 2012 high-on-Obama convention speech to cheering on Clinton. “I’m not just ready for Hillary—I’m rarin’ to get going on her campaign,” Granholm said in a May email sent to supporters of Ready for Hillary, a political action committee that includes bigwigs from Clintonland like James Carville and is serving as campaign-in-waiting until Clinton makes it official. “This isn’t just about electing the first woman president, or putting forward our strongest candidate to keep the Republicans from enacting their extreme social agenda. We all know who the best person is for this job in 2016, and we need to do everything in our power to put her into office.”

Barack Obama
Okay, okay, the president hasn’t actually endorsed his former opponent yet. But the once tepid relationship had flourished by the time Clinton left the State Department earlier this year, and Obama’s 2012 campaign infrastructure has begun to migrate toward Hillaryland. Ready for Hillary has snapped up former Obama staffers. Priorities USA, the primary super PAC supporting Obama in 2012, is planning to devote its resources to Clinton next time around.

Bill Clinton
No Democrat seems more excited for Hillary to run than her husband, though Bill has downplayed his public statements this year. “It’s entirely up to her,” he said in April. “I believe that she’s being absolutely honest with you when she says she doesn’t think she’ll go back into politics. But if she comes home and we do this foundation stuff for the rest of our lives, I’ll be happy; if she changes her mind and decides to run, I’ll be happy.”

Democratic party officials aren’t the only ones pushing Clinton toward a 2016 campaign. A promising duo of rich funders have already vowed to support Hillary ’16. Warren Buffet got an early head start on the endorsement game in November 2012. “I hope it’s Hillary Clinton,” he said. “I like what she believes in. I think she’s extraordinarily able and energetic for that matter in pushing those beliefs. I don’t see how you could have anybody better qualified.” George Soros joined in last month by joining Ready for Hillary as co-chair of its national finance council.

Who knows, maybe even Sen. John McCain (R-Ariz.) might end up supporting Clinton. When an interviewer asked if he’d support Clinton if she were up against Sen. Rand Paul (R-Ky.), he said, “It’s gonna be a tough choice.”