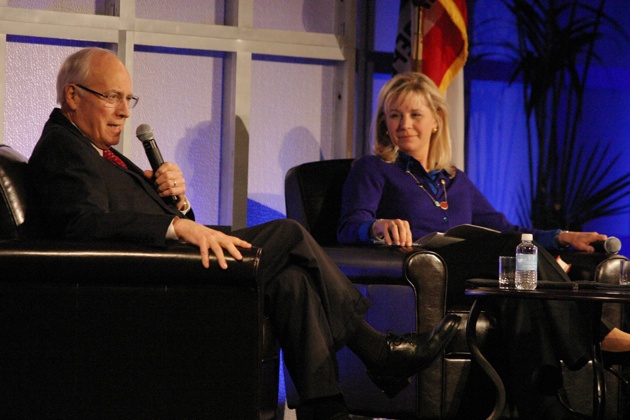 It’s become a tired but true trope for the LGBT rights movement: As more people come out of the closet, the country increasingly tolerates different sexual orientations and identities. It’s easy to casually gay bash when you’ve never met someone who isn’t straight. It’s much harder—and socially unacceptable—when you have to sit across from your niece and her girlfriend at Thanksgiving dinner.

This has certainly been true in politics. Sen. Rob Portman (R-Ohio) wrote an op-ed endorsing same-sex marriage after his college-aged son came out as gay. President Barack Obama cited LGBT members of his staff when he explained his decision to back gay marriage last year. Even former Vice President Dick Cheney began to break GOP orthodoxy during the 2004 campaign. His acceptance can be attributed to his daughter Mary Cheney, a lesbian who married her longtime partner Heather Poe last year. The elder Cheney began to publicly support same-sex unions after he left the White House, pushing Maryland legislators to pass marriage equality in 2012.

But some members of the Cheney family don’t seem so tolerant. Mary’s older sister Liz is challenging Sen. Mike Enzi (R-Wyo.) in next year’s Republican primary, running on a socially conservative platform. Liz’s early poll numbers are dismal, thanks in part to a barrage of outside attack ads that claim she’s “wrong for Wyoming” because she “supports government benefits for gay couples.” (The fact Liz is a novice candidate who just moved back to the state earlier this year hasn’t helped matters either.)

Liz, who’s trailing by more than 50 points, couldn’t let an attack like that stand pat, so she went on Fox News on Sunday to correct the record, clarifying that she’s still dislikes same-sex marriage and doesn’t approve of her sister’s lifestyle. “Listen, I love Mary very much. I love her family very much,” Liz said. “This is just an issue on which we disagree.”

That prompted Mary to go public with her objections to Liz’s outdated views. “Liz—this isn’t just an issue on which we disagree—you’re just wrong—and on the wrong side of history,” Mary wrote on Facebook.

Poe also critiqued her sister-in-law. “Liz has been a guest in our home, has spent time and shared holidays with our children,” Poe wrote on Facebook, “and when Mary and I got married in 2012—she didn’t hesitate to tell us how happy she was for us. To have her now say she doesn’t support our right to marry is offensive to say the least.”

Wyoming is behind the national curve when it comes to same-sex marriage. As of July, only 32 percent of voters in the state support it. But Liz Cheney’s opposition to full LGBT equality might not play so well; it’s hard to campaign on “family values” when you’re publicly criticizing your sister’s marriage. The two sisters are no longer on speaking terms, with Mary telling the New York Times on Sunday that it is “impossible” unless Liz recants her statements. The Cheney family is scheduled to gather in Wyoming for the most awkward Christmas imaginable. “I will not be seeing her,” Mary said.