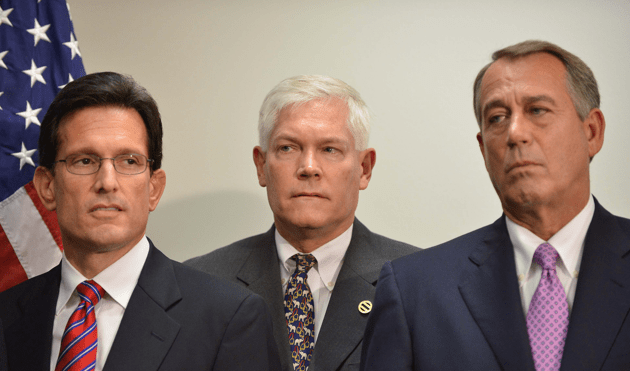 The economy added 204,000 jobs in October, according to jobs numbers released Friday by the Labor Department, despite the two-week government shutdown that put thousands temporarily out of work, and which economists predicted would dampen last month’s numbers. The jobs gain is about twice as many as expected. Employment numbers for August and September were also revised upwards by a total of 60,000 jobs, signaling the economy is strengthening, despite Republican efforts to tank it through budget cuts, shutdowns and default scares.

Even though jobs were added, the unemployment rate increased a tenth of a percentage point to 7.3 percent. This is because of the way job growth is tallied. As Catherine Rampell explained at the New York Times last month:

The jobs report is based on two different surveys—one of households, and one of employers—and it turns out that furloughed federal government workers will be treated as unemployed in the first survey but employed in the second. In other words, the temporary layoff of federal workers will probably increase the unemployment rate, but not (at least directly) depress the payroll job growth numbers.

In October, 448,000 workers reported being on temporarily layoff, at least partially reflecting government shutdown furloughs. In addition to short-term government job losses, the downward trend in federal employment continued. 12,000 federal jobs were lost last month. Over the past year, 94,000 have disappeared.

The number of long-term unemployed, meaning those who have been without a job for 27 weeks or more, remained mostly unchanged at 4.1 million last month. These workers are 36.1 percent of the unemployed. The number of people who work part-time because they can’t find full-time work also remained stagnant at 8.1 million.

The white unemployment rate remains a full percentage point below the average jobless rate, at 6.3 percent. Meanwhile the black unemployment rate is still more than double that, at 13.1 percent. That number is 9.1 among Hispanics.

As has been the case in recent months, most job gains occurred in the low-wage service sector area. Leisure and hospitality added 53,000 jobs; retail gained 44,000 jobs. Average hourly earnings are stagnant. For private employees, worker wages are up 1.8 from a year ago, but consumer price inflation has also increased 1.7 percent.

The total portion of people with a job in America remains at its lowest in decades: 62.8 percent.

Here is how the employment situation in America has looked since just before the recession, via the Washington Post: 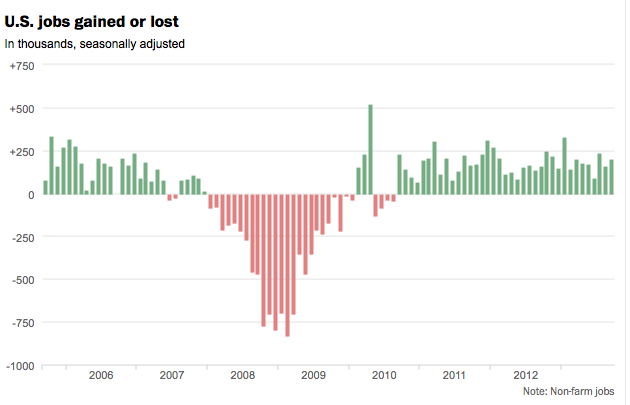 The economy is slowly improving, enough so that it was able weather last month’s shutdown, which cost the economy $2 billion in lost productivity, and caused 120,000 private sector job losses, according to a report released by the Obama administration on Thursday. But the fragile economic recovery—already hampered by massive budget cuts that went into effect in March—may not be able to sustain another shutdown and default scare if Republicans again decide to obstruct a budget deal come January.