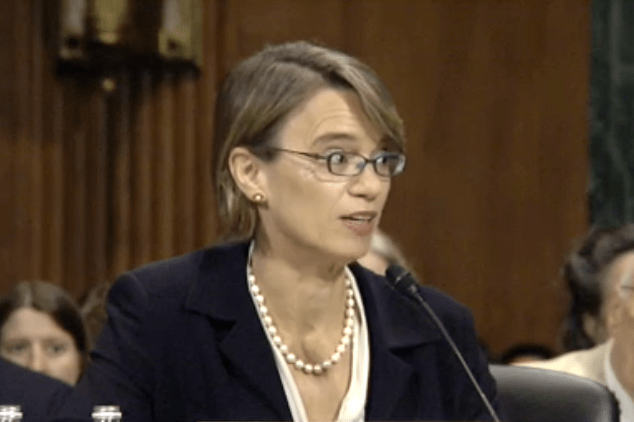 Update: Senate Republicans have blocked Nina Pillard, making her the third woman nominated to the D.C. Circuit to be blocked this year. Melanie L. Campbell, president and CEO of the National Coalition on Black Civic Participation, says, “We see this as an abuse of power by a group of Republican Senators when there no legitimate issues have been presented, and these candidates are highly qualified.”

Senate Majority Leader Harry Reid (D-Nev.) is expected to hold a confirmation vote today for Cornelia “Nina” Pillard, who was nominated by President Obama to sit on the second-highest court in the United States: the DC Circuit Court of Appeals. Pillard is a Georgetown University law professor and a magna cum laude graduate from Harvard Law School who has argued and filed briefs on dozens of cases that have come before the Supreme Court. She is also unabashedly feminist and pro-choice and supports access to contraception and comprehensive sexual education. As a result, she’s attracting a wave of attacks from Republicans, who are waging a battle to make sure she never gets to join the conservative-dominated court.

“I have concerns about your nomination…[Your academic] writing, to me, suggest that your views may well be considerably outside of the mainstream,” Sen. Ted Cruz (R-Texas) said during Pillard’s July hearing before the Senate Judiciary Committee, which in September voted to advance her confirmation to the full Senate. Conservative think tanks have been less diplomatic with their views: Tony Perkins, president of the Family Research Council, wrote that Pillard promotes “militant feminism,” and “America can’t afford to give a lifetime appointment to a radical ideologue.”

The two biggest Supreme Court cases that Pillard worked on helped affirm rights for both men and women in the United States. In 1996, her brief helped persuade the US Supreme Court to end the Virginia Military Institute’s decades-old men-only policy. And in 2003, her argument led the Supreme Court to uphold the inclusion of men in the Family and Medical Leave Act. It’s not these cases, but rather Pillard’s academic writings on reproductive rights, that have sparked Republican fears of her “militant feminism.”

At a September Senate Judiciary Committee hearing, Sen. Chuck Grassley (R-Iowa) went so far as to read Pillard’s writings to another DC Circuit judicial nominee to see if he disagreed—without revealing that Pillard wrote them. A Democratic Senate aid told the Huffington Post he found the exchange “super weird.” The writings Grassley quoted came from a 2007 Georgetown University Law Center paper, in which Pillard noted that “reproductive rights, including the rights to contraception and abortion, play a central role in freeing women from historically routine conscription into maternity.” That insurance plans were not required to cover women’s contraceptives was, she wrote, “emblematic of a much broader failure,” and she expressed support for more comprehensive sex education in schools.

In a 2006 entry for the Encyclopedia of American Civil Liberties, Pillard wrote that “accurate health education can help to make abortion less necessary by teaching teens about reproduction and birth control.” Republicans aggressively attacked this viewpoint. “You [have argued] that if a state decides to teach abstinence-only, that that decision…in your judgment, may be unconstitutional. Is that indeed what you were arguing?” Cruz asked at the July hearing.

Pillard replied: “I’m a mother. I have two teenage children, one boy and one girl…I want both of my children to be taught to say no, not just my daughter. I want my son to be taught that too. The article was very explicit. I don’t see any constitutional objection [to] abstinence-only education that does not rely on sex-role stereotypes.”

Cruz said that he found that to be “an extraordinary position,” and Ed Whelan, writing in the National Review, accused Pillard of “false testimony” on the abstinence education issue. “No one who seeks to use the Constitution to impose and advance her own dogmatic belief…should be trusted with judicial power,” he wrote. Pillard has said repeatedly that her personal views will have no place in her judicial decision-making, and Media Matters has called the National Review‘s attacks on Pillard “sexist, hypocritical, and flawed.”

Sen. Mike Lee (R-Utah) also brought up Pillard’s writings at the July hearing, accusing Pillard of comparing anti-abortion protesters to white supremacists. “Do you believe that pro-life protesters are fairly analogous to Klu Klux Klan members who lynched African Americans?” he asked. Pillard disagreed, noting that the brief in question referred to why protesters shouldn’t interfere with law enforcement, and, at the time, there wasn’t a more relevant statute to cite. She said that after that case, Congress passed the Freedom of Access to Clinics Entrances Act in 1994, which made it illegal for protesters to obstruct people going to health clinics.

If Pillard’s confirmation is blocked by Republicans, it will be because they can’t handle an openly feminist, pro-choice federal judge—or because, as Reid has pointed out, they are stonewalling all of the Obama administration’s nominees, no matter their background. Obama has nominated two others to the DC Circuit, one of whom has already been filibustered by Republicans. “While Senate Republicans are blocking President Obama’s nominees to this vital court, they were happy to confirm several judges to the DC Circuit when Presidents Reagan and Bush were in office…Pillard is incredibly qualified and dedicated,” Reid said.

At least one conservative legal scholar agrees: “I know well Professor Pillard’s intellect, integrity, and temperament…I know her to be a straight shooter when it comes to the law and legal interpretation,” wrote Viet D. Dinh, who served as the assistant attorney general for legal policy under President George W. Bush. “I am confident that she would approach the judicial task of applying law to facts in a fair and meticulous manner?.”