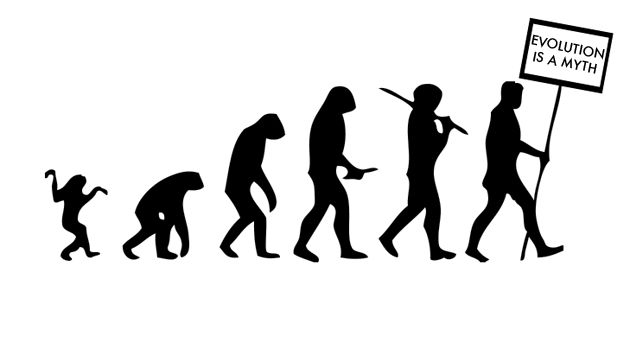 Late last week, the Texas Board of Education failed to approve a leading high school biology textbook—whose authors include the Roman Catholic biologist Kenneth Miller of Brown University—because of its treatment of evolution. According to The New York Times, critiques from a textbook reviewer identified as a “Darwin Skeptic” were a principal cause.

Yet even as creationists keep trying to undermine modern science, modern science is beginning to explain creationism scientifically. And it looks like evolution—the scientifically uncontested explanation for the diversity and interrelatedness of life on Earth, emphatically including human life—will be a major part of the story. Our brains are a stunning product of evolution; and yet ironically, they may naturally pre-dispose us against its acceptance. 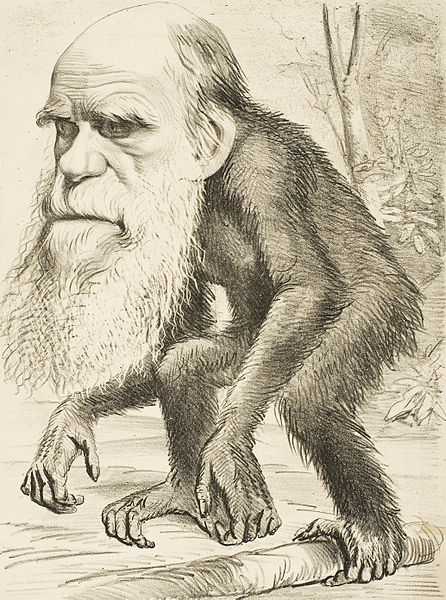 “I don’t think there’s any question that a variety of our mental dispositions are ones that discourage us from taking evolutionary theory as seriously as it should be taken,” explains Robert N. McCauley, director of the Center for Mind, Brain, and Culture at Emory University and author of the book Why Religion is Natural and Science is Not.

So what can science tell us about our not-so-scientific minds? Here’s a list of cognitive traits, thinking styles, and psychological factors identified in recent research that seem to thwart evolution acceptance:

Biological Essentialism. First, we seem to have a deep tendency to think about biology in a way that is “essentialist”—in other words, assuming that each separate kind of animal species has a fundamental, unique nature that unites all members of that species, and that is inviolate. Fish have gills, birds have wings, fish make more fish, birds make more birds, and that’s how it all works. Essentialist thinking has been demonstrated in young children. “Little kids as young as my 2 and a half year old granddaughter are quite clear that puppies don’t have ponies for mommies and daddies,” explains McCauley.

If essentialism is a default style of thinking, as much research suggests, then that puts evolution at a major disadvantage. Charles Darwin and his many scientific disciples have shown that essentialism is just plain wrong: Given enough time, biological kinds are not fixed but actually change. Species are connected through intermediate types to other species—and all are ultimately related to one another.

Teleological Thinking. Essentialism is just one basic cognitive trait, observed in young children, that seems to hinder evolutionary thinking. Another is “teleology,” or the tendency to ascribe purposes to things and objects so as to assume they exist to serve some goal.

Recent research suggests that 4 and 5 year old children are highly teleological in their thinking, tending to opine, for instance, that clouds are “for raining” and that the purpose of lions is “to go in the zoo.” The same tendency has been observed in 7 and 8 year olds who, when asked why “prehistoric rocks are pointy,” offered answers like “so that animals could scratch on them when they got itchy” and “so that animals wouldn’t sit on them and smash them.” 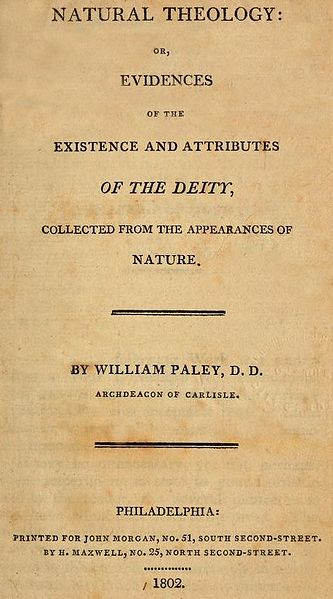 Title page of the Reverend William Paley’s 1802 work Natural Theology, which famously propounded an argument for God’s existence based on the appearance of design in nature. Wikimedia Commons

Why do children think like this? One study speculates that this teleological disposition may be a “side [effect] of a socially intelligent mind that is naturally inclined to privilege intentional explanation.” In other words, our brains developed for thinking about what people are thinking, and people have intentions and goals. If that’s right, the playing field may be naturally tilted toward anti-evolutionist doctrines like “intelligent design,” which postulates an intelligent agent (God) as the cause of the diversity of life on Earth, and seeks  to uncover evidence of purposeful design in biological organisms.

Overactive Agency Detection. But how do you know the designer is “God”? That too may be the result of a default brain setting.

Another trait, closely related to teleological thinking, is our tendency to treat any number of inanimate objects as if they have minds and intentions. Examples of faulty agency detection, explains University of British Columbia origins of religion scholar Ara Norenzayan, range from seeing “faces in the clouds” to “getting really angry at your computer when it starts to malfunction.” People engage in such “anthropomorphizing” all the time; it seems to come naturally. And it’s a short step to religion: “When people anthropomorphize gods, they are inferring mental states,” says Norenzayan.

There has been much speculation about the evolutionary origin of our anthropomorphizing tendency. One idea is that our brains developed to rapidly assume that objects in the world are alive and may pose a threat, simply because while wrongly mistaking a rustle of leaves for a bear won’t get you killed, failing to detect a bear early (when the leaves rustle) most certainly will. “Supernatural agents are readily conjured up because natural selection has trip-wired cognitive schema for agency detection in the face of uncertainty,” write Norenzayan and fellow origin of religion scholar Scott Atran.

Illustration by Rene Descartes of the pineal gland, which he believed to be the location of the soul within the brain. Wikimedia Commons

Dualism. Yet another apparent feature of our cognitive architecture is the tendency to think that minds (or the “self” and the “soul”) are somehow separate from brains. Once again, this inclination has been found in young children, suggesting that it emerges early in human development. “Preschool children will claim that the brain is responsible for some aspects of mental life, typically those involving deliberative mental work, such as solving math problems,” write Yale psychologists Paul Bloom and Deena Skolnick Weisberg. “But preschoolers will also claim that the brain is not involved in a host of other activities, such as pretending to be a kangaroo, loving one’s brother, or brushing one’s teeth.”

Dualistic thinking is closely related to belief in phenomena like spirits and ghosts. But in a recent study, it was also the cognitive factor most strongly associated with believing in God. As for evolutionary science? Dualism is pretty clearly implicated in resistance to the idea that human beings could have developed from purely natural processes—for if they did, how could there ever be a soul or self beyond the body, to say nothing of an afterlife?

Inability to Comprehend Vast Time Scales. According to Norenzayan, there’s one more basic cognitive factor that prevents us from easily understanding evolution. Evolution occurred due to the accumulation of many small changes over vast time periods—which means that it is unlike anything we’ve experienced. So even thinking about it isn’t very easy. “The only way you can appreciate the process of evolution is in an abstract way,” says Norenzayan. “Over millions of years, small changes accumulate, but it’s not intuitive. There’s nothing in our brain that says that’s true. We have to override our incredulity.”

Group Morality and Tribalism. All of these cognitive factors seem to make evolution hard to grasp, even as they render religion (or creationist ideas) simpler and more natural to us. But beyond these cognitive factors, there are also emotional reasons why a lot of people don’t want to believe in evolution. When we see resistance to its teaching, after all, it is usually because a religious community fears that this body of science will undermine a belief system—in the US, usually fundamentalist Christianity—deemed to serve as the foundation for shared values and understanding. In other words, evolution is resisted because it is perceived as a threat to the group.

So how appropriate that one current scientific theory about religion is that it exists (and, maybe, that it evolved) to bind groups together and keep them cohesive. In his recent book The Righteous Mind, moral psychologist Jonathan Haidt argues that religions provide a shared set of beliefs and practices that, in effect, serve as social glue. “Gods and religions,” writes Haidt, “are group-level adaptations for producing cohesiveness and trust.” The upside is unity; the downside, Haidt continues, is “groupishness, tribalism, and nationalism.” Ideas and beliefs that threaten the group or the beliefs that hold it together—ideas like evolution—are bound to fare badly in this context. 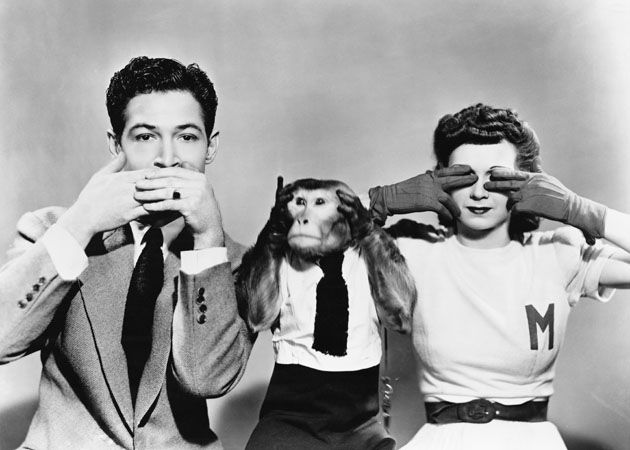 Fear and the Need for Certainty. Finally, there appears to be something about fear and doubt that impels religiosity and dispels acceptance of evolution. “People seem to take more comfort from a stance that says, someone designed the world with good intentions, instead of that the world is just an intention-less, random place,” says Norenzayan. “This is especially true when we feel a sense of threat, or a feeling of not being in control.”

Indeed, in one amazing study, New Zealanders who had just suffered through a severe earthquake showed stronger religiosity, but only if they had been directly affected by the quake. Other research suggests that making people think about death increases their religiosity and also decreases evolution acceptance. It’s not just death: It’s also randomness, disorder. In one telling study, research participants who were asked to think of a situation in which they had lacked control and then to “provide three reasons supporting the notion that the future is (un-) controllable,” showed a marked decline in their acceptance of evolution, opting instead for an intelligent design-style explanation. (Another study found that anti-evolutionists displayed higher fear sensitivity and a trait called the “need for cognitive closure,” which describes a psychological need to find an answer that can resolve uncertainty and dispel doubt.)

Such is the research, and it’s important to point out a few caveats. First, this doesn’t mean science and religion are fundamentally incompatible. The conflict may run very deep indeed, but nevertheless, some individuals can and do find a way to retain their religious beliefs and also accept evolution—including the aforementioned biology textbook author Kenneth Miller of Brown University, a Catholic.

Second, while there are many reasons to think that the traits above comprise a core part of who we are, it doesn’t automatically follow that religion is the direct result of evolution by natural selection. It is also possible that religion arises as a byproduct of more basic traits that were, in turn, selected for because they conferred greater fitness (such as agency detection). This “byproduct” view is defended by Steven Pinker here.

In any event, the evidence is clear that both our cognitive architecture, and also our emotional dispositions, make it difficult or unnatural for many people to accept evolution. “Natural selection is like quantum physics…we might intellectually grasp it, with considerable effort, but it will never feel right to us,” writes the Yale psychologist Paul Bloom. Often, people express surprise that in an age so suffused with science, science causes so much angst and resistance.

Perhaps more surprising would be if it didn’t.