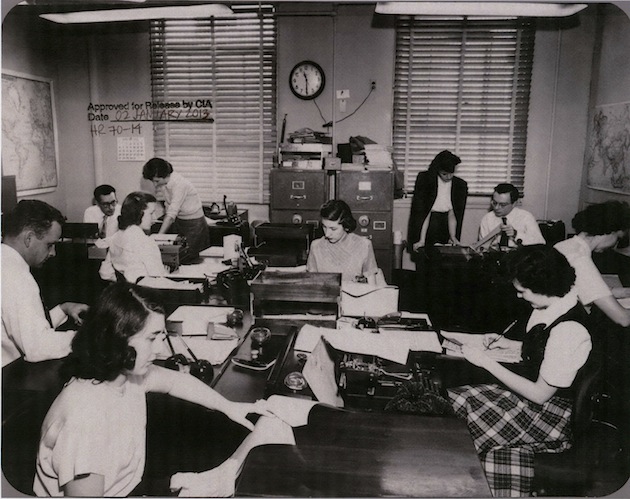 A few years ago, four veteran CIA officers, with more than a 100 years of collective experience over four decades, were asked to speak frankly about serving in the agency as women. The taped conversations, used for internal review by the CIA, reveal encounters with male attitudes from the officers’ early years that aren’t surprising—it was indeed a Mad Men world, albeit with security clearances. The transcripts, part of a trove of recently declassified CIA documents, also contain wry, Peggy Olson-esque recollections in which being a woman proved an asset—and hardly in the “femme fatale” vein of intelligence gathering.

“You could always tell them by their socks,” said Meredith, then-deputy chief of the CIA’s European Division, about spotting foreign agents. (All last names in the document are redacted.) She joined the agency with her husband in 1979 as a “contract wife,” a spouse sent abroad by the CIA with her agent-husband to provide secretarial-type support work for low pay. When dressing to blend in with the crowd, Meredith recalled, undercover agents—on all sides—tended to overlook shoes and socks. “That would never occur to my husband to look at.”

“Women…were much better at detecting surveillants on foot,” agreed Patricia, who joined the agency in 1973 and was awarded the CIA’s Distinguished Career Intelligence Medal when she retired in 2004. “I always put that down to women [being] more sensitive [to] who’s near or in their space, for physical protection.” That included in stores, she said, “because surveillants don’t shop well; they just can’t fake it.” 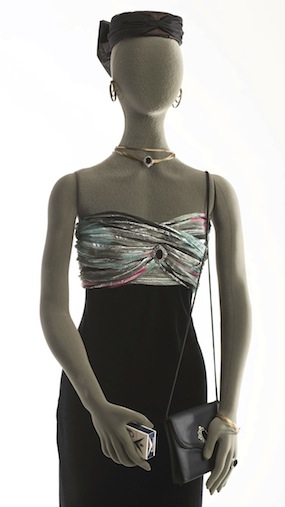 Carla, who joined the agency in 1965 and was Deputy Chief of the Africa Division by the time she retired in 2004, recalled a time when male higher-ups in the agency warned that women would be ineffective for recruiting agents and gathering intel abroad. She recounted a successful assignment debunking that notion:

I never actually had to pitch the guy. I [played] sort of the “Dumb Dora” personality, and “Golly” “Gee!” and “Wow!” He would tell me, “I just love talking to you because you’re not very bright.” And I would just sit like this [makes an innocent expression]. The recruitment ended because he told me about a plot to go bomb the embassy in [redacted] and we arrested him and his gang of merry men as they crossed the border. He just told me everything and I got tons of intel out of him because I was just a woman who wasn’t very bright.

An internal survey from 1953 dubbed “The Petticoat Panel” shows that while women accounted for 40 percent of the agency’s employees at the time—better than the overall US workforce then, which was 30 percent female—only one-fifth of those women were above the midlevel GS-7 on the government’s salary grade, which went to GS-18. Meanwhile, 70 percent of men in the CIA were higher than G-7, and 10 percent topped GS-14, a grade no women had reached at the time. That was despite the fact that women had proven essential to American intelligence just years prior as high-ranking operations officers and data analysts with the WWII-era Office of Strategic Services (OSS), the precursor to the CIA.

Yet, while men made up the lion’s share of highly paid roles in the agency, women accounted for 60 percent of the agency’s jobs in statistical analysis. Linda McCarthy, a CIA historian and former agency analyst, says that’s unsurprising: “During World War II, when it came to numbers, the war department went after women,” she told Mother Jones. “Same with maps and codework: They specifically wanted to find women for that kind of work. They were simply better at it.” McCarthy said the prevailing notion in the agency at the time ascribed women’s aptitude for stats, geography, and code breaking to maternal instinct. “They figured, you have to be patient to raise children, and you have to be patient to make maps by hand, so it must all be connected.”

Motherhood, alas, was not generally viewed as a plus. Male senior staffers blamed women’s lack of advancement in the CIA on “this business about people getting married and pregnant at your operational inconvenience.” Chief of Operations Richard Helms, who became director of the CIA in 1966, explained that supervisors were making a simple calculation when it came to promoting women. “You just get them to a point where they are about to blossom out to a GS-12, and they get married, go somewhere else, or something over which nobody has any control, and they are out of the running.” One male staffer surveyed for the report was more blunt: “The economic responsibilities of women are not as great as those of men. Women should not be employed in higher paying positions and deprive men of these opportunities. Women should not be employed at all when men are in need of employment.” 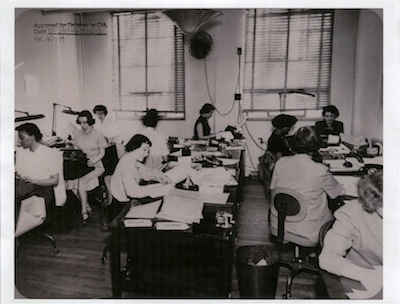 If the CIA was serious about taking “full advantage of the womanpower resources available to it,” the panel concluded, the agency would need to find ways to move experienced clerical personnel—who tended to be women—into higher positions, cut language in job postings that expressed unwarranted preferences for male candidates, and train supervisors in how to recruit, mentor, and promote women.

By the 1970s, documents show, little had changed. A 1971 memo from agency’s Recruitment Division reports it had received “few if any” specific directives from higher-ups encouraging the recruitment of professional women. The Clandestine Service division was glaringly devoid of women, the memo notes, explaining that “there has apparently been some resistance by the CS to accept many women on the theory, real or fancied, that they are limited in their operational potential.” (They might have consulted Virginia Hall, a senior officer still active at the time. She began her espionage career in France in 1942 gathering intel for the Allied effort, evading Nazis in a brazen escape across the Pyrenees at one point, and going undercover as a hefty French farmwoman, all while wearing a wooden prothesis thanks to a earlier hunting accident that took her right leg below the knee. Gestapo flyers from the time read: “The woman who limps is one of the most dangerous Allied agents in France…We must find and destroy her.”)

But women’s lib was on the rise, and in 1977 then-Deputy Director E. Henry Knoche requested talking points about “womanpower” in the CIA from a committee advising on gender issues. The resultant memo suggested language to use when convincing male senior officials to promote women in the ranks: “What kind of careers do you want for [your daughters]? Do you want to see their opportunities limited to the GS-07 or GS-08 level where the majority of women in the Agency remain today?” Alternatively, it suggested invoking the Equal Employment Opportunity Act of 1972: “Women’s lib is open to debate, the law of the land is not.” 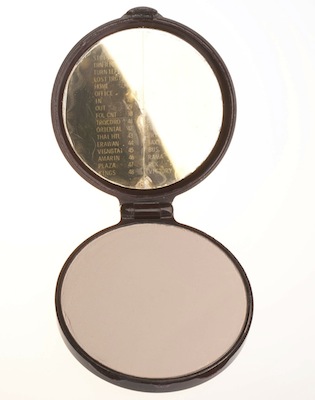 Today, Valerie Plame is a household name, and in TV and movies women appear to be practically running the CIA: Homeland, Alias, and Zero Dark Thirty all feature women leading top-secret missions and fighting the good fight at home and abroad. Zero Dark Thirty brought wider attention to the work of Alec Station, the CIA unit comprised mostly of female analysts that was devoted for years to hunting Osama bin Laden. Michael Scheuer, who led the unit, told the Washington Post that these women were “extraordinarily adept at both mastering the kind of detailed information that’s key to counterterrorism, but also very, very insightful in mapping out relationships.” He quipped, “I would have been happy to put up a sign outside my office that read, ‘No men need apply,'”

The CIA has never been headed by a woman. In 2011, 46 perfect of agency employees were women, and the share of female employees in the agency’s GS-13 to GS-15 levels was 44 percent, up from under one-tenth in 1980. In June, President Obama tapped Avril Haines, an experienced national security staffer, to become the CIA’s next deputy director and the first woman to hold that spot.

But promotions for women into the higher ranks still lag behind those for men. To be sure, some women do opt to drop out given the extreme demands of the job and work-life imbalance that can result, including Nada Barkos, who was at the center of the hunt for top Al Qaeda leader Abu Musab al-Zarqawi. “I think there has to be a better way,” Bakos said after leaving the agency, regarding the strain on her family life.? For women who tough it out, often by skimping on their personal lives, the path is far from smooth. The woman portrayed as “Maya” in Zero Dark Thirty, the intrepid analyst largely credited with finally locating bin Laden, was reportedly passed over last year for a promotion to the coveted GS-14 rank.

In 2012, after finding that just one-fifth of all officers promoted to the Senior Intelligence Service last year were women, then-CIA director David Petraeus asked Madeleine Albright to head an advisory group aimed at upping the number of women in leadership roles. Albright’s report recommends tamping down on harassment, pushing managers to help women subordinates climb the ranks, and promoting mentorship, among other findings.

The declassified testimonials of the four female officers betray a familiar theme for ambitious women: decidely mixed emotions about juggling a career with life at home. “Once I tasted this drug of being a case officer… the motherhood that I insisted on became kind of secondary,” said Iranian-born Susan, who helped the agency beef up language training in the wake of the Iran hostage crisis and again after 9/11. When she went on her first tour abroad, the strain of separation almost ended her marriage. “But for me to be sitting here as a senior female case officer of this Agency—every single one of us had to make sacrifices. For men, it’s the same, too. But for us, the sacrifices we made were tainted with kind of huge, huge guilts: leaving our husbands, leaving our children, and not being a housewife at home. Now, things have changed. But even now, for any female to get up to wherever they want, they’ve got to think they have choices. And they’ve got to make those choices.”