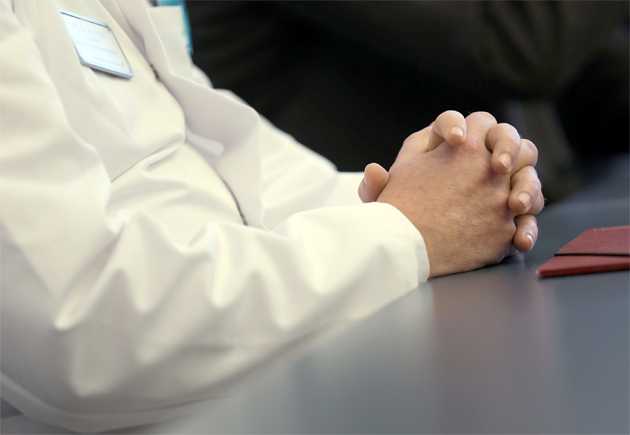 Catholic hospitals have been on a merger spree over the last few years, as Mother Jones reported earlier this year. Ever-expanding swaths of the country are now served only by a Catholic hospital, where patients have no choice but to receive care dictated by Catholic bishops whose religious edicts don’t always align with what’s best for a patient. Catholic hospitals generally follow the Ethical and Religious Directives for Catholic Health Care, which restrict abortion even in cases where a fetus isn’t viable, for instance, a practice that has resulted in hospitals denying proper care for women suffering from miscarriages. The ACLU recently filed suit against the US Conference of Catholic Bishops on behalf of a Michigan woman who was suffering a second-trimester miscarriage and was sent home twice by a Catholic hospital, developing a serious infection because the hospital refused to even talk to her about the possibility of an abortion. Her baby died two hours after she miscarried.

Despite this heavy mixing of theology and health care, Catholic hospitals in 2011 received $27 billion—nearly half of their revenues—from public sources, according to a new report put out today by the American Civil Liberties Union and MergerWatch, a reproductive rights advocacy group. And that figure doesn’t even include other tax subsidies the hospitals receive thanks to their nonprofit status.

The hospitals have long justified their tax status and restrictions on care by pointing to their religious mission of serving the poor and their delivery of charitable care. But the new ACLU/MergerWatch report suggests, and the chart below illustrates, Pope Francis might be on to something when he’s said that the church needs to shift its priorities to focus less on abortion and more on the poor. MergerWatch data show that Catholic hospitals, where executives often earn multimillion-dollar salaries, aren’t doing any better providing charity care than other religious non-profit hospitals that don’t restrict care. They’re barely any better than ordinary secular nonprofits.

All of these numbers suggest that as Catholic hospitals have merged and expanded into a multi-billion dollar enterprise, they’ve moved far beyond their religious mission and become like any other large corporation. Given those trends, and the hospitals’ reliance on public funding, it’s hard to see how they can continue to justify their mixing of Catholic doctrine with health care, especially when it disproportionately violates standards of care for women.

The ACLU/MergerWatch report calls on the US Department of Health and Human Services to crack down on Catholic hospitals and to insist that they follow federal law requiring all hospitals that receive Medicare and Medicaid funding to provide emergency treatment to any patient, even if that care requires an emergency abortion. Other advocacy groups have made similar requests in the past few years, but HHS thus far has refused to pick a fight with the Catholic Church, which has turned into one of the Obama administration’s biggest foes thanks to the contraceptive mandate in the Affordable Care Act. The church has proven to be a powerful enemy—a wealthy special interest in a holy war—and even the new Pope seems unlikely to persuade it to give up this particular fight.