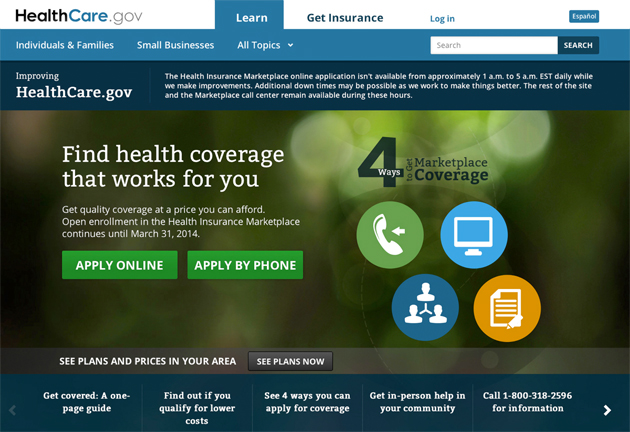 Today, the US District Court for the District of Columbia* will hear arguments in one of the last lingering legal challenges to the Affordable Care Act. The suit, Halbig v. Sebelius, argues that a single phrase in the law creates a loophole big enough to drive a truck through and nullify the whole thing.

The argument goes something like this: When Congress wrote the ACA, it said that premium subsidies would be available for certain qualifying citizens who were “enrolled through an Exchange established by the State.” (Emphasis added.) The law doesn’t say that those subsidies are available to people in the 34 states that declined to set up exchanges, where residents must utilize the now-infamously buggy Healthcare.gov, the federal exchange.

That’s where Obamacare opponents see a fatal flaw in the law. The plaintiffs in Halbig claim that they won’t be eligible for tax credits because their states didn’t start an exchange, so they won’t be able to afford insurance. As a result, they argue that they’ll be subject to the fine for not buying insurance, or to avoid the fine, they’ll have to pay a lot for insurance they don’t want. They want the court to block the IRS from implementing the law.

The complaint is pretty convoluted, and it’s clearly a political attack. Indeed, one of the plaintiffs was also a plaintiff in the lawsuit filed by the National Federation of Independent Businesses challenging the legality of the individual mandate, an argument rejected by the Supreme Court. The other plaintiffs are also conservative operatives, including the lead plaintiff, Jacqueline Halbig, who was a senior policy adviser to the Department of Health and Human Services under George W. Bush. (She’s also been the source of a host of conservative rhetoric about “baby death panels“ in the ACA.) The intellectual force behind the suit,* Michael Cannon, is a health care expert at the libertarian Cato Institute who has spent the last few years urging states to refuse to set up insurance exchanges as a means to sabotage Obamacare.

The Obama administration argues that the language Halbig’s case is premised on is merely a drafting error common in legislation and routinely reconciled after passage. (Indeed, if Congress were functioning normally, such copy mistake would have been corrected by now, but given the level of polarization in that body, it’s been impossible to make such fixes that were once routine.) An amicus brief in the case filed by Families USA, a nonprofit health care advocacy group helping the administration combat some of the bad PR surrounding Obamacare, argues that the plaintiffs are disregarding the vast body of evidence showing that Congress intended for all low-income Americans to be eligible for tax subsidies, regardless of which exchange they used to purchase insurance.

Timothy Jost, a law professor at Washington and Lee University, has said that Congress essentially fixed the drafting error in another piece of legislation requiring the federal exchange to report information to the IRS and to promulgate regulations around Obamacare. The Congressional Budget Office has also treated the law as if the subsidies are available on the federal exchange.

So far, though, the lawsuit has survived. US District Court Judge Paul Friedman, a Clinton appointee, declined to dismiss the suit, though he did refuse the plaintiffs’ request for an emergency injunction to prevent the IRS from implementing the law. Friedman will hear summary judgment arguments in the case this afternoon.*

The case seems destined for the Supreme Court, where a conservative majority is already hostile to Obamacare. The Roberts court has also shown little interest in considering congressional intent when interpreting the law. (See its history on the Voting Rights Act.) John Roberts has proven to be something of a literalist when it serves his interests. That record alone ought to give the administration and health care reformers pause. If Halbig et al. prevail in the case, Mother Jones‘ Kevin Drum has suggested that premium subsidies could end up available only to people in the 16 mostly blue states that have chosen to run their own exchanges, while the rest of the country (all the red parts) would keep paying taxes to underwrite those subsidies. But Halbig and her backers are clearly hoping that a decision in their favor will kill Obamacare completely.

Correction: An earlier version of this article erroneously stated that an appeal of a trial court decision in the case is being heard in the DC Circuit Court of Appeals on Tuesday. It also misidentified Michael Cannon as a lawyer. He has a master’s degree in law and economics but not a Juris Doctor. The story has since been fixed.