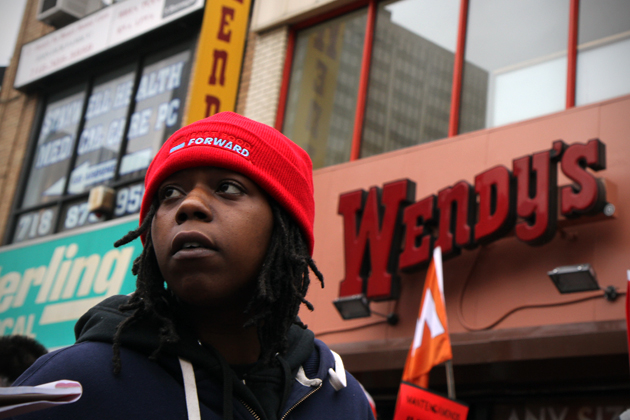 Lisa Reid is a cashier at a KFC in Brooklyn. She’s 27, with three kids. She works 16 to 26 hours a week at the federal minimum wage of $7.25. That’s not enough to live on, so sometimes she takes a second or third gig at McDonald’s or Burger King. But right now, she just has the one job. She lives with her mom to make ends meet.

Last year, Reid was approached by an organizer with the community group New York Communities for Change (NYCC) who asked her if she thought she was paid enough, and whether she wanted to fight for better working conditions. “We do a lot of work for the pay we get,” Reid says. And that’s why she decided to join very first fast-food strike in November 2012, and why she has participated in every one since.

On Thursday, Reid—holding a protest sign and a four-year-old—was among the thousands of workers in 100 American cities taking part in the largest such strike to date. Workers are demanding a $15 minimum wage and the right to form a union without retaliation. The movement has grown faster than many of its organizers had expected, stirring up debate in media and policy circles over the federal minimum wage. 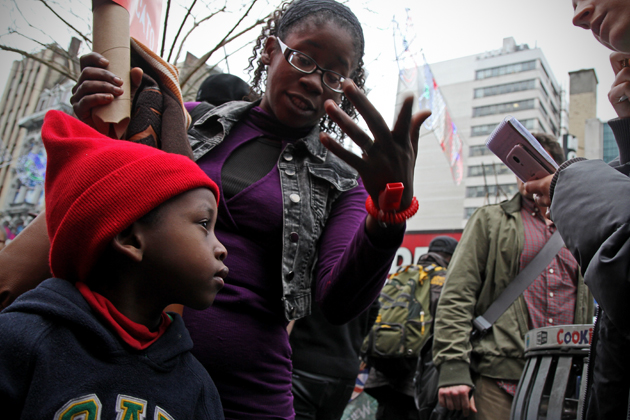 The movement was initiated by the NYCC—which has run campaigns in poor communities to prevent foreclosures, protect rent-stabilized housing, and stop school closures—with the help of Service International Employees Union (SEIU). Executive Director Jonathan Westin says that working with low-income people over the past few years has opened organizers’ eyes to the number of people whose fast-food jobs left them impoverished.

“People were being paid minimum wage and working part-time hours,” he says, and “living in complete poverty.” Organizers heard stories of people “not being able to afford rent, living in the back of cars and homeless shelters, while trying to raise kids. Some people were making $100 a week,” Westin adds. Hence the idea for a broad fast-food strike.

NYCC organizers started going door-to-door, talking to workers at Burger King and McDonald’s and Wendy’s and KFC, and asking them if they were willing to organize for higher pay. “There was not a worker we talked to that wouldn’t sign onto the campaign,” Westin says. “Folks were unanimously supportive.” 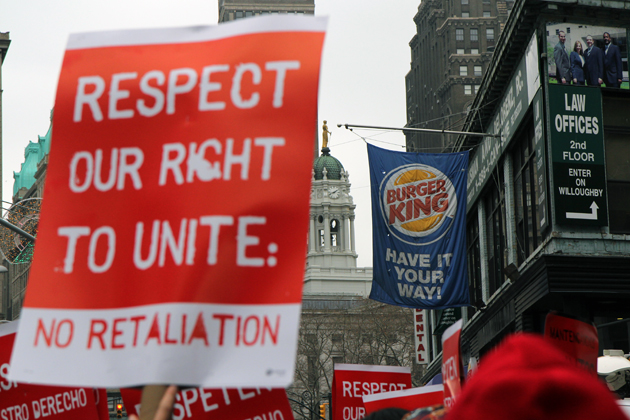 Clashing messages at a strike in Brooklyn Tim McDonnell/Mother Jones

Naquasia LeGrand, another Brooklyn KFC worker, says she signed on for the first strike in New York City last fall because workers haven’t seen a dime of the record profits the chains are reaping. “We don’t get enough respect,” she says.

After the the first round of strikes in New York, in which 200 workers picketed, the SEIU—which had been contributing manpower and organizing know-how—helped take the movement national. In December 2012, workers in Chicago walked off the job. In April and May, fast-food employees staged strikes in seven cities. In August, the strikes expanded to 60 cities.

The movement “has grown way beyond our expectations,” says Mary Kay Henry, president of the SEIU. But beyond drawing attention to the pay issue, the protests so far have had little impact. Many franchises have extended their employees a couple of extra quarters per hour, hoping to appease the strikers, Henry says. But “this won’t blow over.”

Henry and Westin haven’t seen much retaliation against striking employees. They attribute this to the movement having a broad base of support, including many local politicians and clergy members. 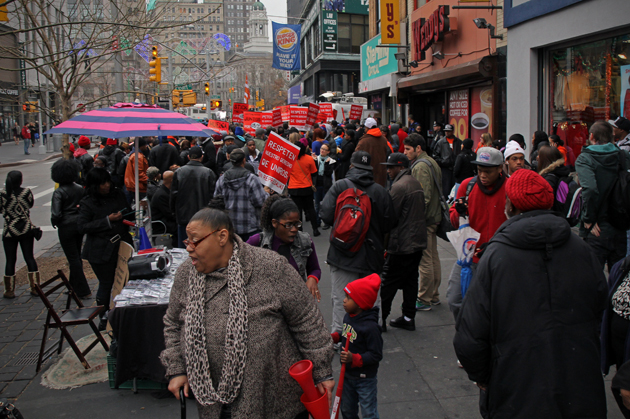 Cynthia Greene, foreground, has worked at a KFC in Brooklyn for 13 years.
Tim McDonnell/Mother Jones

But there have been some reports of retaliation. I spoke to one restaurant worker who says her pay was docked 25 cents an hour after she started striking, and another who said her boss started making her clean the bathroom after she first went on strike, even though it was someone else’s job.

Labor unrest in the fast-food industry was nearly unprecedented before last year. But wages have actually dropped by 36 cents an hour since 2010. Median pay for fast-food workers is $8.69 an hour, according to the Labor Center at the University of California-Berkeley, though many are paid at or near minimum wage. More than half of the families of fast-food workers rely on public programs like food stamps and Medicaid, costing taxpayers $7 billion a year.

These part-time jobs are no longer mostly for teenagers. The industry has traditionally had high turnover, but a slow economic recovery characterized by growth mostly in low-wage, service-sector jobs has meant a growing population of adult fast-food workers who can’t find other work.

Cynthia Greene, who is 51 and walks with a cane, works as a cashier at a Brooklyn KFC. She’s been there 13 years and makes $8.55 an hour. Greene only works 28 hours a week, which doesn’t cover her bills, so she lives with her grown children and uses food stamps. “I want to work more,” she told me. 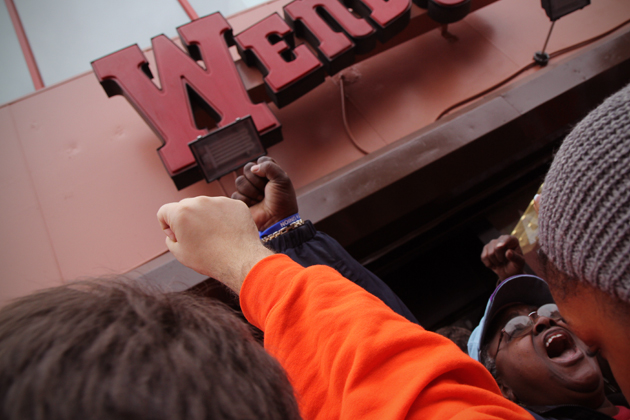