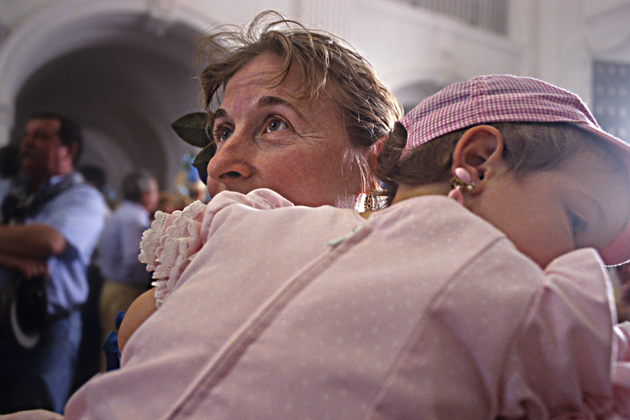 Foreigners applying to permanently live in the United States spend years, sometimes decades, waiting to receive their green cards. But when that visa finally arrives, some law-abiding immigrants have to choose between emigrating to America and staying back with their children—all because their young sons and daughters became adults during the lengthy process. On Tuesday, the Supreme Court is expected to hear a case, Mayorkas v. Cuellar de Osorio, that could have a big effect on whether some applicants who turned 21 during the US visa process are allowed to immigrate at the same time as their parents, rather than being bumped all the way to the back of the line.

“I hope the Supreme Court will show common sense and realize that if a mother applied for a visa when her children were clearly minors, she could not have predicted that it would take so long,” says Richard Alba, an immigration expert and sociology professor at the Graduate Center, CUNY. “The kind of conservative notion that undocumented immigrations are law-breakers really doesn’t apply at all here.”

One of the case’s named plaintiffs is Rosalina Cuellar de Osorio, who applied for a visa in 1998 to join her mother, who is a US citizen. At the time, Cuellar de Osorio’s son was 13. The visa application only took a month to be approved—but a visa didn’t become available until 2005, after her son, Melvin, had turned 21. (US law dictates that only a certain number of visas may be issued per country in a fiscal year.) She was able to emigrate from El Salvador, but the government would not issue an immediate visa for Melvin because he was no longer a child.

Under the 2002 Child Status Protection Act, children who turn 21 during the application process are supposed to “retain the original priority date issued upon receipt of the original petition”—which prevents kids like Melvin from being moved to the back of the visa line just because of their birth date. But in 2009, the Board of Immigration Appeals ruled differently—arguing that the original law wasn’t very clear and could be interpreted to only apply to certain categories of visas—like those that are filed by a lawful permanent resident on behalf of his or her spouse and children—but not necessarily those filed by US citizens. The board maintains that if the law starts applying to everyone, it will “undermine the perception of fairness of the rules” and introduce “tensions” among immigrants.

The US Court of Appeals for the Ninth Circuit ruled in September 2012 that the immigration board was wrong because it failed to take into account Congress’s intent behind the law: That lawmakers never intended for the petitioner’s visa category to factor into the decision-making process. A bipartisan group of lawmakers who were serving when the original law passed in 2002—including Senators John McCain (R-Ariz.), Diane Feinstein (D-Calif.), and Chuck Schumer (D-N.Y.)—filed a brief on November 4, 2013, backing up that position: “The Solicitor General’s continuing insistence that that the [law] is ambiguous raises serious institutional concerns…[Congress] does not typically give an agency carte blanche to rewrite statutory language that is clear.”

The Supreme Court isn’t the only branch taking up this issue—the Senate’s mammoth immigration reform bill, which still hasn’t passed the House, would also fix this problem. Alba, the immigration professor, says, “This is a committee within the immigrations board that made a bad decision, so the question is now, can it be reversed?” The American Immigration Council notes that the current policy “has been heartbreaking for too many individuals,” and that countless immigrants sit in limbo until the issue is resolved. An Iranian applicant who goes by the initials K.M.K., for example, waited with his family for 12 years to get a visa before being bumped because he turned 21. He’s still in Iran, separated from his family, and waiting.