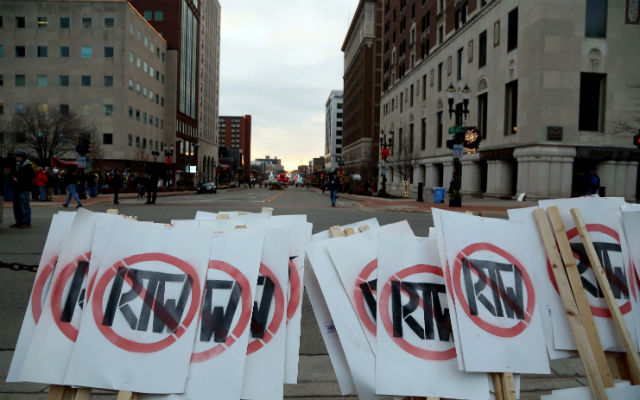 The State Policy Network, an umbrella group overseeing a constellation of right-leaning think tanks in all 50 states, is plotting a nationwide “coordinated assault” to cut public-employee pensions, oppose cap-and-trade legislation and Medicaid expansion, and advocate for school vouchers, according to documents obtained by the Guardian newspaper.

The Guardian‘s documents reveal that State Policy Network’s think-tank affiliates sought financial support for this blitz from the GD Searle Trust, a conservative foundation that bankrolls many major nonprofits including Americans for Prosperity, the American Legislative Exchange Council, and the climate-denying Heartland Institute. The documents show 40 different funding requests pitching conservative policy reforms that were written by think tanks in 34 states.

Here’s more from the Guardian:

Most of the “think tanks” involved in the proposals gathered by the State Policy Network are constituted as 501(c)(3) charities that are exempt from tax by the Internal Revenue Service. Though the groups are not involved in election campaigns, they are subject to strict restrictions on the amount of lobbying they are allowed to perform. Several of the grant bids contained in the Guardian documents propose the launch of “media campaigns” aimed at changing state laws and policies, or refer to “advancing model legislation” and “candidate briefings”, in ways that arguably cross the line into lobbying.

The documents also cast light on the nexus of funding arrangements behind radical right-wing campaigns. The State Policy Network (SPN) has members in each of the 50 states and an annual warchest of $83 million drawn from major corporate donors that include the energy tycoons the Koch brothers, the tobacco company Philip Morris, food giant Kraft and the multinational drugs company GlaxoSmithKline.

SPN gathered the grant proposals from the 34 states on 29 July. Ranging in size from requests of $25,000 to $65,000, the plans were submitted for funding to the Searle Freedom Trust, a private foundation that in 2011 donated almost $15m to largely rightwing causes.

The proposals in the grant bids contained in the Guardian documents go beyond a commitment to free enterprise, however. They include:

• campaigns against worker and union rights in Delaware and Nevada

• opposition to Medicaid in Georgia, North Carolina, and Utah

As I’ve written before, SPN exists to help out its influential state-level affiliates around the country and to push conservative policies in state capitals. It’s enjoyed quite a lot of success lately: SPN members also played a role in the crackdown on workers’ rights in 2011 in Wisconsin, Ohio, Idaho, and Tennessee. A year ago this month, the Mackinac Center for Public Policy, an SPN member, rightly took credit for making Michigan the nation’s 24th right-to-work state. Months later, Dick DeVos, the Amway heir and onetime in Michigan gubernatorial candidate, used SPN’s annual conference as a chance to share his strategy with state-level allies itching for right-to-work in their states. The Guardian‘s documents strongly suggest that conservatives are coordinating their attacks on unions, public employees, and government.

Like prominent liberal nonprofit groups, the State Policy Network appears to have plenty more planned for the near future. If you thought the 2011 fight over workers rights was intense, what’s coming next could be even fiercer.