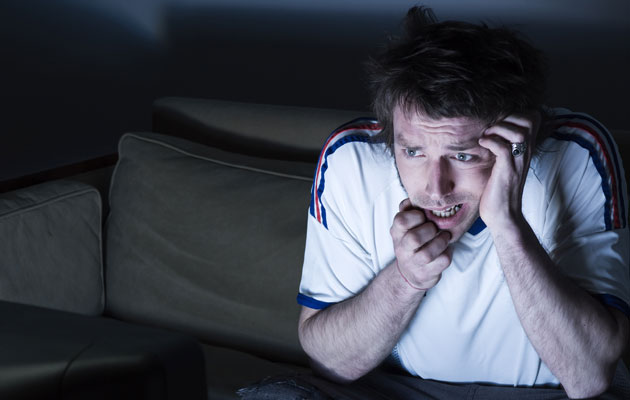 Just how stressful is it to glue yourself to media coverage of a horrific event like the Sandy Hook massacre, the 9/11 attacks, or last year’s Boston Marathon bombings? In some cases, it may be more stressful than direct exposure to the event.

That’s according to a new study from the University of California-Irvine, which focused on the Boston attacks this past April. In the wake of the bombings, researchers measured symptoms of acute stress reported by people who were either at the event or who had loved ones there. They compared these responses to the responses of people with no connection to the event, but who were exposed to repeated media reports on the bombing. The media junkies were the more stressed-out group, because, the team concluded, the extended exposure kept the acute stressor “active and alive” in their minds.

“We underestimate the role of media exposure to graphic images,” says Alison Holman, the study’s lead author. “It’s not just seeing it once; my concern is the repetitive viewing. If seeing those images over and over produces more rumination or habitual worrying, even at a subconscious level, it could be contributing to mental or physical ailments.”

Almost 10 percent of respondents to the researchers’ internet survey reported being “directly exposed” to the events of April 15; just over 1 percent were at or near the bombing site, while roughly 9 percent had a close friend or family member there. The survey asked respondents to rate 30 statements—such as “I try to avoid thoughts about the Boston Marathon bombings” and “I feel hypervigilant or ‘on edge'”—on a scale of 0 (never experienced) to 5 (experienced very often). The researchers then used clinical criteria to determine stress levels for each respondent. In order to fall into the category of “high acute stress,” the person had to report symptoms involving all four criteria: disassociation, avoidance, re-experiencing, and arousal/anxiety.

As expected, they found symptoms of stress among people with direct exposure to the bombings, but little incidence of “high acute stress,” which Holman points out, is symptomatically similar to PTSD—although not necessarily a predictor of it. But respondents who followed media coverage for six or more hours a day in the weeks after the bombings were more than twice as likely to fall into the “high acute stress” category. And when compared to respondents who had neither direct exposure to the events nor significant media exposure to them, the heavy TV watchers were nine times as likely to exhibit high acute stress.

Although the results cannot be extrapolated directly to events like the Sandy Hook shootings, some of the findings may apply generally to other “collective traumas.” For instance, an earlier study of Holman’s had found an increase in mental and physical ailments among people exposed to extended media coverage of the 9/11 attacks. At the time, though, researchers assumed that these type of reactions were reserved for people who were directly affected in some way.

Holman and her coauthors did look at how past exposures to traumatic events affected the respondents’ stress symptoms. Those who’d had direct exposure to the Newtown killings, for example, were much more likely to report symptoms of acute stress in the wake of the Boston bombings. “Repeated exposure to trauma-related content is likely to reinforce rumination and intrusive thoughts, activate fear circuitry, and perhaps contribute to development of flashbacks,” the study reads. What’s more, “people who are most distressed in the aftermath of such an event are probably more likely to engage media coverage as a way of coping with the experience.”

Direct exposure to Hurricane Sandy, which was devastating for many families, did not provoke the same sensitivity. The researchers think that’s because the Sandy, unlike the killings at Sandy Hook Elementary, was a natural disaster, as opposed to “deliberately perpetrated violence against the community.”

Holman was somewhat surprised by the team’s findings. She certainly didn’t expect them to be so dramatic. She takes it as a warning: Americans “have to temper and control how much we expose ourselves to this kind of content.” She also was impressed by what she calls the “tremendous” resilience of Bostonians, based on their relatively low levels of acute stress. “There was a lot of stress imposed on the community,” Holman says. “And they did a pretty remarkable job of managing.”