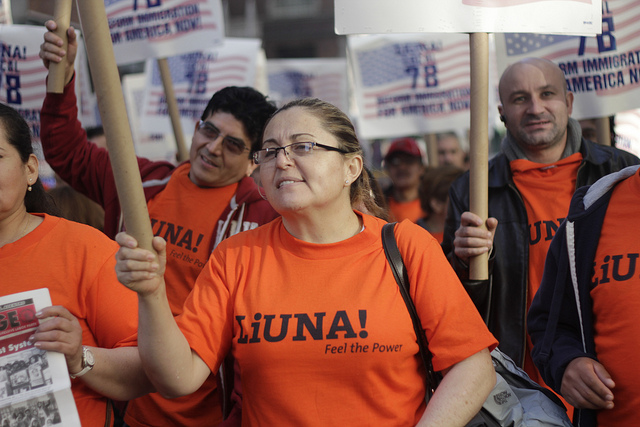 The Republican Main Street Partnership, led by former Ohio Congressman Steven LaTourette, plans to spend millions of dollars in the 2014 midterm elections supporting what it calls “the governing wing of the GOP.” LaTourette’s group aims to give political support and air cover to more moderate Republicans open to compromise in Congress, neutralizing the efforts of conservative stalwarts such as the Club for Growth and getting Ted Cruz-style hardliners out of Congress. The Main Street Partnership is a hybrid entity—part super-PAC, which can raise and spend unlimited sums of money but must disclose its activities, and part nonprofit, which can accept anonymous donations but can’t focus primarily on campaigns and elections.

LaTourette has said his group plans to get involved in eight to 10 Republican primaries, and the Main Street Partnership has raised nearly $2 million to date. Yet according to National Journal, a good chunk of that money comes from two unlikely sources: the International Union of Operating Engineers and the Laborers’ International Union of North America.

That’s right: Two prominent labor unions are underwriting a group stoking the civil war that threatens to tear apart the Republican Party. Documents reviewed by National Journal show that the two unions have together given $400,000 to the Main Street Partnership, accounting for 20 percent of the group’s funds.

Certainly, labor’s not alone in funding Main Street. The group’s money is “coming from business folks, from private donors,” said Main Street spokesman Chris Barron. “It has a wide range of folks who are interested in supporting the governing wing of the Republican Party.”

Barron rejected critiques of Main Street’s funding and positioning. “If the money came from Mother Teresa, the Club for Growth would attack where it came from,” Barron said.

Both the Operating Engineers and the Laborers’ union have given millions of dollars to Democratic candidates and millions more to the party’s quasi-official House and Senate super PACs over the last few years. Only one other PAC gave more to Democratic candidates than the Operating Engineers’ in 2012, according to the Center for Responsive Politics.

But both unions have also consistently invested in the campaigns of friendly Republicans, including LaTourette’s (when he was in Congress). Earlier this year, LIUNA endorsed New Jersey Republican Gov. Chris Christie for reelection and its PAC gave $300,000 to the Republican Governors Association, which ran pro-Christie advertising in the Garden State.

The Operating Engineers’ PAC has given 23 percent of its donations to federal candidates to Republicans this year, according to the Center for Responsive Politics, and it supported a super PAC called “Lunch Pail Republicans” last year. At the AFL-CIO’s national convention in September, the Operating Engineers and another group offered a successful resolution urging “that the AFL-CIO take practical steps…to cultivate and nurture relationships with members of all parties” and “encourage moderate candidates” in Republican-leaning congressional districts as part of a “pragmatic, bipartisan approach” to its political giving and advocacy.

“Especially with this crazy political atmosphere, this is a place where we need to be lending support to middle-of-the-road Democrats and Republicans both, and this is part of that effort,” Jeffrey Soth, the Operating Engineers’ political director, said.