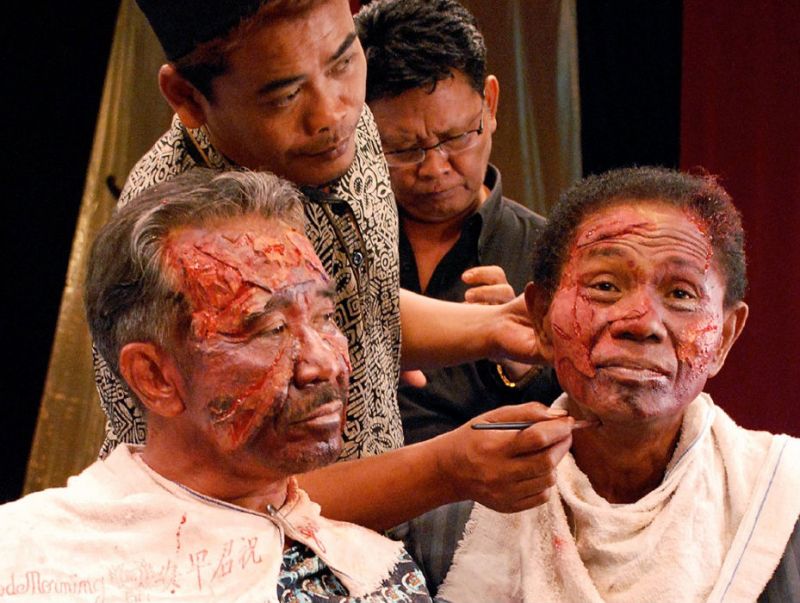 The Act of Killing is that rare documentary—one that might actually change things. The film (released on DVD and Blu-ray on Tuesday) examines the anti-communist, death-squad-abetted purge in Indonesia carried out in 1965 and 1966. The horrific slaughter claimed hundreds of thousands of alleged and committed communists (possibly a million tortured and executed souls) and led to the jailing of another million. It is a chapter in the Southeast Asian and Oceanian republic’s history that its government is too often reluctant to address.

The documentarians interview some proud death-squad alumni and focus on Anwar Congo, one of the founding fathers of the right-wing paramilitary group Pancasila Youth, which participated in the carnage. (The bloodletting, conducted by the Indonesian Army and gangster-filled death squads, was instrumental in crushing the Indonesian Communist Party and securing the presidency for Suharto, a genocidal dictator and US ally in the Cold War.) Anwar—who is shown walking as a free man, beloved by many Indonesians—recounts murdering as many as 1,000 people, his preferred method being garroting enemies of the state with wire. And the filmmakers don’t just convince the killers to brag about their grisly crimes; they persuade them to reenact them, in a series of often bizarre segments inspired by gangster films and musicals.

The Act of Killing has enjoyed wide international praise and is considered by many to be a shoo-in for an Academy Award nomination for Best Documentary Feature (nominees are set to be announced on January 16). But inside Indonesia, distribution of the film has been a trickier issue. Under Indonesian law, only films that have cleared a state censorship body can be commercially distributed.

“The whole strategy of releasing the film in Indonesia is to avoid it being banned in Indonesia,” Joshua Oppenheimer, one of the film’s directors, tells Mother Jones. “We knew that if we released it in theaters [in Indonesia], the film would be banned, and it would become a crime to watch the film…It is not safe for me to return to Indonesia, or for my Indonesian crew to come out of anonymity.”

The unique roll-out in Indonesia has included invitation-only screenings, DVDs, free downloads, and uploading a version to YouTube. The campaign is being managed by one of the documentary’s other two directors (the third being Christine Cynn). He is one of the many crew members credited as “Anonymous,” necessary for his continued safety in Indonesia. Fear of reprisal is a regular concern. When a newspaper editor was attacked after printing the name of Pancasila Youth in his paper’s coverage of The Act of Killing, Anonymous adjusted accordingly.

“It was a crazy day,” he tells Mother Jones. “Calls were coming, everyone suggested us to leave [our] house, just in case they find who Anonymous is. We moved all computers and terabytes of hard drives we used for editing to a safe house. We draw an evacuation plan with my passport always in my pocket, in case paramilitary or other anti-communist groups come and attack us.”

“Instead of saying sorry for the mass killing in 1965, they want the film not to be seen by Indonesians.”

Anonymous is a campaigner for an environmental NGO, and finds creative and political influences in the likes of George Orwell, Mahatma Gandhi, and Pramoedya Ananta Toer. “I was one of thousands of students who stood face to face with riot police in 1998, urging the New Order military dictatorship to go,” he said in a statement posted to The Act of Killing‘s website. He was born on the Indonesian island of Java, and grew up in the country with his parents, both native Indonesians. His great uncle, who had worked as a civil servant in 1965, had been a member of a communist student association, and was forced to hide those left-wing affiliations for the rest of his life for fear of being purged. And as Anonymous flies under the radar while orchestrating the film’s guerrilla distribution campaign, he sees the full value of both social media and old-fashioned word of mouth.

“Instead of saying sorry for the mass killing in 1965, they want the film not to be seen by Indonesians,” Anonymous says. “Our main [publicity] is through social media (Facebook and Twitter) since our website is regularly DDoS–attacked from Indonesia. Anyone in Indonesia can ask for a free DVD; all they have to do is [say] that they will have a screening with friends or family and give us their shipment address.”

Anonymous is also in touch with a few bookstores that give out the DVD as a bonus item, as well as two pirate DVD sellers who are marketing the documentary online. He says that after it was announced on September 30 that The Act of Killing was available for free download in Indonesia, the number of DVD requests doubled. “We cannot put billboard advertisement or print an advertisement in media, but every time there’s an open screening, organizers print and put posters or stickers everywhere,” he says.

“Millions of people were tortured, raped, and killed, and nothing has been really done about it. What the hell am I going to do with my camera? What film am I making?”

Nowadays, Anonymous and Oppenheimer are busy editing The Look of Silence, another documentary about the 1965 mass killing—this time from the victims’ perspective. Throughout the distribution campaign, Anonymous has met many survivors and victims’ families who are pushing the Indonesian government to launch a serious justice and reconciliation process.

“This is the nightmare I have to face, probably as an Indonesian, facing the real face of my nation, my history, and partly my identity,” he says. “I knew about the mass killing long before we started filming The Act of Killing, but never have I been so close seeing and listening to perpetrators’ proud confession about the killing. And all that time, behind the camera, I had to keep my feeling to myself. And there was that disturbing question again: Millions of people were tortured, raped, and killed, and nothing has been really done about it. What the hell am I going to do with my camera? What film am I making? What can it do? What will it do?”

So far, The Act of Killing has indeed made quite the impact. The filmmakers are receiving significant pushback from powerful, pro-death squad figures in Indonesian society. For instance, one army general responded to the film by declaring that the time had come to exterminate the “neo-communists” gathering to watch it. Anwar and another subject of the film have considered suing Oppenheimer. But on the more reassuring side of things, the movie has undoubtedly boosted awareness of the massacres and atrocities. After seeing the film, an editor at Tempo (a major Indonesian news and politics magazine) contacted Oppenheimer to confess that he had spent his whole time at the magazine censoring stories about the genocide. No more, he vowed. Tempo later ran an issue dedicated to examining the horrors of ’65 and ’66.

“There was a time before The Act of Killing, and a time after,” the editor told Oppenheimer. “I don’t want to grow old as a perpetrator.”