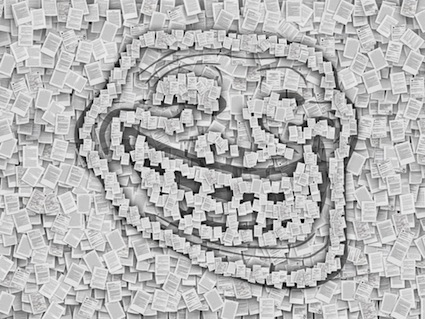 Amanda Hess, who writes about sex, gender politics, and culture, had an explosive essay this week in the Pacific Standard about what it’s like to be a woman on the Internet, especially one in the public eye. Too often, she explains, it’s insanely terrifying. Hess, who’s written for Slate, Wired, and ESPN and lives in Los Angeles, has been stalked for years by an anonymous reader who went by “headlessfemalepig” on Twitter, a now-suspended account that appeared to have been set up solely to send her abusive messages like these:

“I am 36 years old, I did 12 years for ‘manslaughter’, I killed a woman, like you, who decided to make fun of guys cocks.

…Happy to say we live in the same state. Im looking you up, and when I find you, im going to rape you and remove your head.

…You are going to die and I am the one who is going to kill you. I promise you this.”

Headlessfemalepig is just a particularly aggressive example from the thousands of trolls who’ve come at Hess over the years. And Hess, of course, is hardly the only woman on the Internet to face their wrath. From her piece:

“Here’s just a sampling of the noxious online commentary directed at other women in recent years. To Alyssa Royse, a sex and relationships blogger, for saying that she hated The Dark Knight: “you are clearly retarded, i hope someone shoots then rapes you.” To Kathy Sierra, a technology writer, for blogging about software, coding, and design: “i hope someone slits your throat and cums down your gob.” To Lindy West, a writer at the women’s website Jezebel, for critiquing a comedian’s rape joke: “I just want to rape her with a traffic cone.” To Rebecca Watson, an atheist commentator, for blogging about sexism in the skeptic community: “If I lived in Boston I’d put a bullet in your brain.” To Catherine Mayer, a journalist at Time magazine, for no particular reason: “A BOMB HAS BEEN PLACED OUTSIDE YOUR HOME. IT WILL GO OFF AT EXACTLY 10:47 PM ON A TIMER AND TRIGGER DESTROYING EVERYTHING.”

She’s done exhaustive reporting on the failures of law enforcement at all levels to comprehend, let alone address, the emotional, professional, and financial toll of misogynistic online intimidation. She’s called local police, 911, and the FBI on a number of occasions when she feared for her safety IRL; law enforcement officials have recommended to her and other women that they stop wasting time on social media. One Palm Springs police officer responding to her call, she recounts, “anchored his hands on his belt, looked me in the eye, and said, ‘What is Twitter?'” “When authorities treat the Internet as a fantasyland,” she writes, “it has profound effects on the investigation and prosecution of online threats.”

It’s a painful read, but Hess’s piece should be required reading for anyone with an Internet connection. And check out this excellent response by Conor Friedersdorf at the Atlantic (a “6-foot-2, 195-pound man”), who recalls guest-blogging for a female colleague there who was on vacation. “I’d never been exposed to anything like it before,” he recalls.

“To really understand how it feels to read these missives (to the extent that someone other than the intended recipient can even begin to understand), it’s necessary to experience their regularity. Instead of a lone jerk heckling you as you walk down a major street, imagine dozens of different people channeling the same hyper-aggressive hatefulness, popping up repeatedly on random blocks for hours on end. That’s what some bloggers had to endure over the course of years to make it.”

Friedersdorf notes that this was in the early 2000s, when political bloggers with major-league cache today like Ezra Klein and Matt Yglesias were just starting out. “One wonders how many equally talented women we missed out on reading due to misogynists hurling vile invective at rising female journalists.”