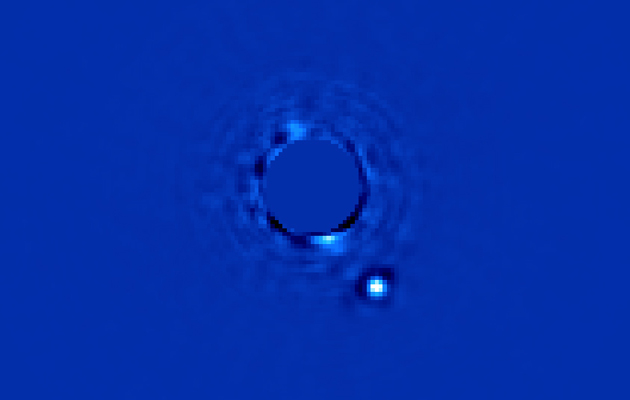 Last week, a team of astronomers at the Gemini Planet Imager in Chile released the mysterious blue image above. That small bright dot in the lower right of the image is a planet—not a planet in our solar system like Mars or Neptune, but one 63 light-years away. It’s the planet Beta Pictoris b, which orbits the star Beta Pictoris in the southern constellation Pictor. But what’s most exciting about the picture is the technology used to make it, which represents a dramatic improvement in the speed and quality with which scientists will be able to look for other planets—including “Earth 2.0,” a theorized planet much like our own.

The first confirmation that planets exist beyond our solar system came in 1992, when a team of astronomers monitored changes in radio waves to prove that multiple planets were orbiting a small star about 1000 light-years away. Then, in 2005, astronomers created the first actual image of a planet beyond our solar system (the date is arguable because the observation was made in 2004, but not confirmed until a year later). Since then, hundreds more planets have been discovered, and a few others have even been photographed.

So when Gizmodo reported last week that the blue image above was the “first ever image of a planet, orbiting a star,” they didn’t have it quite right. In fact, the image wasn’t even the first time that planet had been photographed. But the GPI images are still extremely exciting: They could mark the beginning of a new era of planet-hunting, thanks to technology developed by a team of astronomers led by Bruce Macintosh of Lawrence Livermore National Laboratory.

Frank Marchis, who works for the SETI Institute, a nonprofit organization that seeks to explore, understand, and explain the prevalence of life in the universe, is a key member of Macintosh’s planet-hunting team. I met with him in San Francisco last week to discuss the project and the search for Earth 2.0:

MJ: What exactly are we seeing in this image?

FM: Behind this image is a lot of work. This image is simply a planet orbiting around another star. So we call that an exoplanet – an extrasolar planet – because it doesn’t belong to our solar system. It belongs to another planetary system. So this is the grail of modern astronomy. We’re trying desperately now to image those planets because we know they exist. When you observe a planet with [the now defunct telescope] Kepler, what you’ve been doing is basically detecting the transit – the attenuation of [the star’s] light – due to the planet passing between us and the star. Now with GPI, the Gemini Planet Imager, which is mounted at the 8 meter class telescope in Chile we’re going to be able to see the planet itself.

MJ: Tell me about your background and your role in this project.

FM: I was born in France and used to work in Chile, where I did my Ph.D. from 1996 to 2000 at the European Southern Observatory. Then I moved to the U.S. to work at UC Berkeley on the Keck telescope data because Keck had just been equipped with adaptive optics systems [more on adaptive optics below]. So my specialty right now is the use of adaptive optics systems to study small solar system bodies. But I also started working on exoplanets. My role in GPI itself was that I started working in the consortium in 2003 helping on the design and type of operation we’d be able to do. So I’m not working on the instrument itself, tuning it and so on. But all of us have been working on this project for about 10 years. And all of us had targets we wanted to observe. 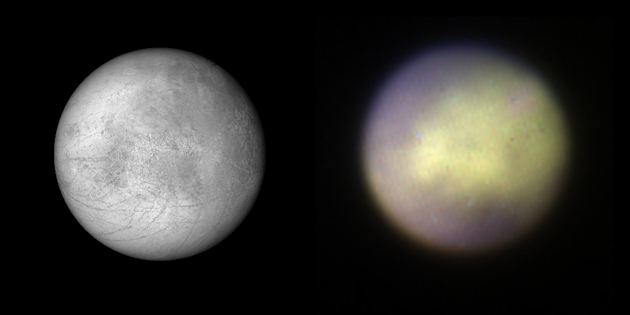 MJ: The Kepler and Hubble telescopes have already done research that directly and indirectly observed planets and other systems. What do you expect GPI can show you that we haven’t seen before?

FM: Kepler is a mission which was designed to do a statistical analysis of the number of earth-like planets in our galaxy. And it succeeded as a mission over 4 years. We now have a better understanding of the number of planets in our galaxy. Hubble Space Telescope is a very interesting telescope because it’s in space, but it’s a small telescope. It’s a 2 meter telescope. Now on the ground we built 8 to 10 meter class telescopes and soon we’ll build 30 meter class telescopes. And those telescopes are better resolution, a better image quality, as soon as we get rid of the atmosphere. And that’s the key of GPI. GPI is a camera with an adaptive optics system. Adaptive Optics System allow you to get rid of the atmospheric effect of Earth’s atmosphere. So you get rid of blurring. So what you see is a planetary system like if the telescope were in space.

MJ: Can you explain a little bit of the science behind that and how you’re able to remove atmospheric “noise”, so to speak?

FM: This is a technology that was created about 15 to 20 years ago, and that’s one of the reasons I came to the US was to work on this technology. So with adaptive optics you analyze the light coming from star. And after the analysis of this light you have a small mirror with 1000 actuators. And those actuators move 400 to 1000 times per second. So they move not randomly, they move after calculation coming from a computer which tells this system how to compensate atmospheric turbulance. Once you’ve done this you can collect light from near infrared (which is slightly redder than we can see) and in this wavelength range you have a correction almost perfect. You have excellent image quality.

MJ: So you’re saying there’s a calculation you can make to balance the interference you get from looking through the atmosphere?

FM: Right. And the reason we had to wait until now to get an adaptive optics system like GPI is simply because now we have computers capable of doing those calculations. You have light coming in at real time. 1000 times per second we have to inverse a matrix of 30 by 30 to know how to move each of these acuators to a position that is 1/2 of a micron (a micron is about 100 times smaller than a human hair). So it’s extremely accurate. It’s microelectronics and computer science together from a photon coming from 50 or 100 light years away.

On top of that, with GPI we have what we call a coronograph. It’s an instrument which hides the light coming from the star’s glare so you can see the planet as well.

MJ: So the choronograph is the blue disc that’s in the middle of the star that we’re seeing? 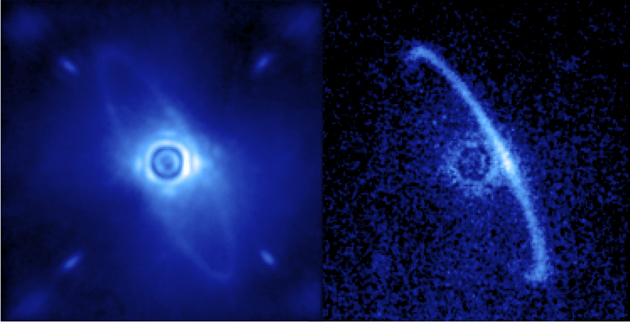 MJ: Can you describe some of the advantages and disadvantages for having a ground-based program?

FM: Plenty of advantages. First, we can go to the telescope. We can change the instrument and tune it. This is the first light data. So it’s not perfect. It looks impressive but I’m telling you: in 6 months it’s going to be even more impressive. Right now we know there are some issues with the instrument. It’s new. It just came out of US Santa Cruz Integration lab, and we have to tune it to make it behave better with telescope. Another advantage is you can improve the instrument. Most likely in a few years if we find out GPI is limited for some reason and we want to expand the operation, we’ll be capable of using new mirrors, new electronic mirrors developed recently. And put them in instead of the old one. If you launch a spacecraft like Kepler you cannot do that. You launch it and it’s done. It’s going to survive 3 to 5 years.

And as [project lead] Bruce Macintosh says, “Even these early first-light images are almost a factor of 10 better than the previous generation of instruments. In one minute we are seeing planets that used to take us an hour to detect.”

MJ: What do you plan to look for next?

FM: Next we’re going to start doing the science. And the science is even more interesting than the instrument, I think, because the science is about searching for Jupiter-like planets around younger stars. And we have a list of targets – 600 of them – that we will be observing. We will get 900 hours of observation with GPI to do this imaging for three years.

So in the future we’re going to be able to tell you which star you’re observing with your naked eye will have a planet, and what type of planet. That’s the goal of GPI: to tell the public where there are planets, where there are worlds. And not only where they are, but the orbit of those bodies around the stars, the type – if they’re Jupiter, Saturn, or maybe Earth-size planets – and also the temperature and composition of their atmosphere. We are going to be able to get photons coming from the planet. And photons contain a lot of information – especially if there is more than one.