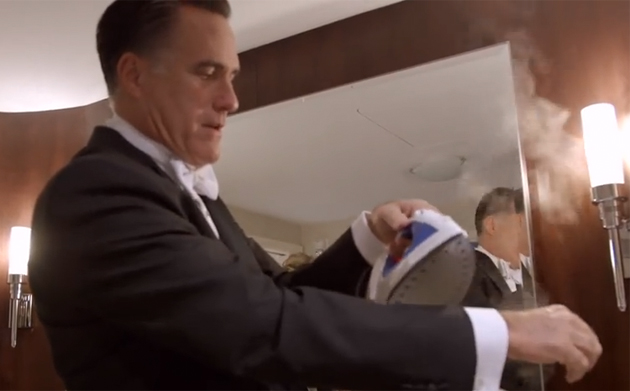 Forgive me for being parochial, but I was looking for a specific piece of footage in the new Netflix behind-the-scenes documentary on Mitt Romney—simply titled Mitt—that was made by Greg Whiteley, who trailed the GOP candidate for six years through Election Night 2012. I yearned to see Romney’s response to the release of the 47-percent video: how he personally reacted to this revelation and how his campaign planned its public reply. This was a significant moment in Romney’s political life. How he handled it could be quite enlightening. After all, the film does record how Romney dealt with his 2008 loss in the GOP presidential primaries. (In conversations with his family, Romney acknowledges he was branded “the flippin’ Mormon,” and says, “I think I’m a flawed candidate.”) But Whiteley offers us no peek at how the former CEO processed the historic 47-percent moment that did much to define him—or reinforce an existing definition.

In fact, for all the access Whiteley obtained, he serves up little material that will alter the basic story of Mitt. Sure, the viewer will learn that Romney likes to romp in the snow with his grandkids, that he’s happier with a pair of duct-taped gloves than a new set, that he has a somewhat dark sense of humor, that he often thinks of his father, that wife Ann is tightly strung, and that Romney likes to pick up trash from the floors or balconies of hotel rooms during tense moments (say, before he hits the stage for a debate or prior to the announcement of election results). Certainly, Romney comes across as less robotic in these 90-minutes of home-movie-like scenes. But the film offers no insights about the fellow. His faults as a presidential candidate are not examined. What he really believes—other than the notion that the nation is heading off a cliff due to too much taxation and regulation—is left on the cutting room floor. That is, if it was ever captured.

The documentary, in a way, is anti-matter, shaped by what it does not cover. Campaign deliberations are not chronicled. Critical decisions are barely detailed. The film tracks Romney during the 2008 primaries; it ignores the 2012 GOP contests (picking up the narrative at the 2012 convention). Grandchildren get more screen time than key aides. It’s as if the movie was produced in a bubble—actually, a bubble within a bubble.

Mitt appears to be an effort to rehab Romney’s image—to show the real family guy, not the 1-percent caricature. Yet there’s not much here to prompt a serious reconsideration. And the documentary answers no questions that linger after Romney’s two failed expeditions toward the White House. Perhaps most Americans are not craving such answers. But Romney and his campaign did leave behind material that should be explored. The list below of moments and matters that do not appear in Whiteley’s narrow version of RomneyWorld show that there is not much to miss in Mitt.