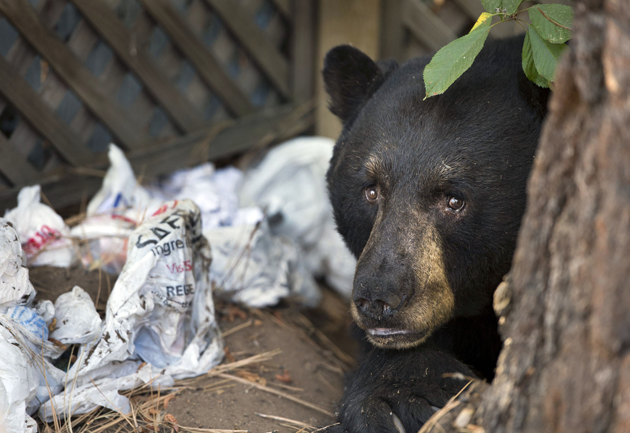 A black bear hunkers down near a pile of garbage in Sacramento last fall. Randy Pench/Sacramento Bee/ZUMA

Last week, a rogue black bear made a cameo appearance for skiers at the Heavenly Mountain Resort near Lake Tahoe. The month before, a 260-pound male bear had to be put down by wildlife officials after breaking into several cars and a home in the same area. The spate of run-ins comes as California’s brutal drought lingers on, with snowpack in the Sierra Nevada at a fifth of its normal level, leading several news outlets to suggest that balmy conditions have led bears here to awaken prematurely from their annual winter slumber.

That’s a nice hypothesis, but according to the California Department Fish and Wildlife, there’s nothing to it. Five to 15 percent of the Tahoe area’s 300 black bears stay awake every winter, said CDFW biologist Jason Holley, and “we don’t have any evidence to support that there’s any more this winter.” In fact, Holley said, the last few months of 2013 saw fewer bear complaints than average. 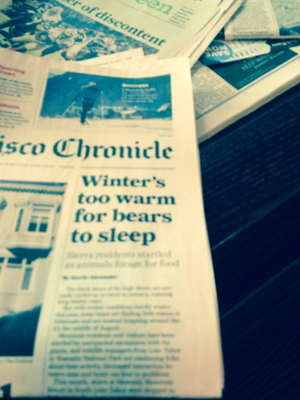 The front page of a recent San Francisco Chronicle. There’s no evidence that more bears are awake this year than in an average year, officials said. Clara Jeffery/Mother Jones

So why all the hullabaloo? Holley’s guess is that the drought cut down supplies of the bears’ natural food sources—mainly grass, berries, and insects, although they’ll eat just about anything—forcing those that are normally awake anyway to wander further afield, i.e., onto your ski slope or into your backyard. Not that the bears mind much.

“They are very adaptive and very mobile, so they will usually be able to take care of their daily needs in a drought situation,” Holley said. “But then they’re coming down to the lake to drink a lot, coming down for food. If the drought persists, it greatly increases the odds of a negative interaction with people.”

What motivates some bears to stay awake while others hibernate is still somewhat of a mystery to scientists, according to Roger Baldwin, a wildlife specialist at the University of California-Davis who has conducted extensive research on bear behavior. When small mammals (a squirrel, say) hibernate, their heart rate and body temperature drop radically, toeing death’s doorstep without actually stepping over, and stay that way for several months. Black bears, on the other hand, are much less extreme: They crank down their metabolism, heart rate, and body temperature just enough to get seriously lazy, but are still with it enough to be “perfectly capable of taking a swipe at you if you crawl into the den with them,” Baldwin said, so rousting them is neither uncommon nor difficult.

Bears often scout out multiple den sites in advance of winter and move between them if one gets disturbed; in warm years, that could happen if snow melts into the den (“They’re not gonna sit there in a pool of water,” Baldwin said), or for any number of non-weather-related reasons. But generally, temperature has a much smaller influence on hibernation behavior than the availability of food; in a very lean summer, bears will build up smaller fat reserves and not be able to hibernate for as long. But they are such proficient omnivores, Holley said, that even a drought like this year’s probably isn’t enough to majorly disrupt their hibernation habits, unless it continues for several more years.

But drought does increase the risk that bears that do find their way to garbage cans, cars, and other food sources from people will, like Yogi, get too comfortable raiding peoples’ pic-i-nic baskets. That’s why it’s especially important to keep these things on lockdown, away from bears, Holley said.

“It’s everybody’s responsibility to help keep bears wild,” he said. More on how to do that here.