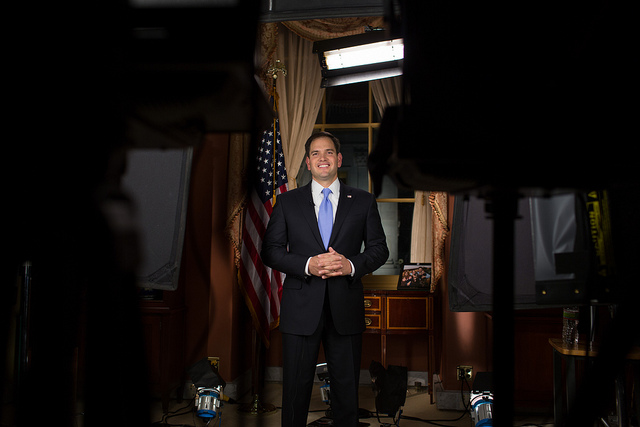 Marco Rubio getting ready for his State of the Union response last year. Note the lack of a visible source of water. <a href="http://www.flickr.com/photos/57209931@N03/8468722497/in/photolist-dUmq9R-fLmxn2-hL6GWS">Speaker John Boehner</a>/Flickr

This story was first published in 2014.

President Barack Obama is set to deliver his 2014 State of the Union address on Tuesday night. Early leaks suggest a speech that will focus on steps to fight economic inequality, particularly by increasing the minimum wage and expanding universal pre-K. But let’s forget all that silly policy gibberish for the moment and instead focus on what the State of the Union really means: It means a Republican politician has an unparalleled opportunity to really embarrass herself.

The State of the Union response is typically a plum given to one of the opposition party’s up-and-comers, and on Tuesday the honor will go to Rep. Cathy McMorris Rodgers (R-Wash.), the highest-ranking woman in the GOP House leadership. But she may want to think twice before celebrating: In recent years, Republicans have found it an unenviable gig, more likely to stall or sink a rising politician than aid their ascent.

The president’s speech opens with a long, applauded walk to the podium, along which he can’t help but be bear-hugged by every random House member. He takes the stage before a rapturous crowd in a grandeur House chamber, and he gets approximately a gazillion standing ovations.

If you’re the responder, that’s a tough act to follow. The networks will cut to you standing in a room, usually by yourself, awkwardly staring into a camera. Your speech writers probably had a general sense of what the president was going to say, but without specifics in advance, you’ll be left unprepared to rebut his arguments and be forced to speak in broad generalities. It’s a setup that makes these speeches droll, bland, and inoffensive affairs.

But that doesn’t mean they can’t be memorable, as a string of gaffes from Republican responders in the Obama era shows. Here’s a brief selection of highlights:

2009: Obama didn’t give an official State of the Union address in 2009 since he’d just been inaugurated. But the president did trek down Pennsylvania Avenue to speak before a joint session of Congress that had the same pomp and circumstance. Republicans jumped at the opportunity, offering Louisiana Gov. Bobby Jindal the respondent’s slot. Jindal, long talked about as a potential national candidate, fell to Earth after the speech. He retread the same old “small government is good” arguments in a hackneyed, “amateurish,” manner that even disappointed the Fox News crowd. Adding insult to injury, the next night Jimmy Fallon invited Georgia-born actor Jack McBrayer on his show to parody Jindal’s speech.

2010: Virginia Gov. Bob McDonnell got the honors for Obama’s first official State of the Union. And McDonnell, who had just been elected governor a few months before, actually gave a compelling speech, generally considered the best response of the Obama years. He ditched the lone-man routine and spoke before a receptive audience in Virginia’s Capitol building, matching at least a bit of Washington’s ceremony. It catapulted his national reputation and fed presidential speculation—speculation that disappeared when his administration became embroiled in corruption charges. Last week, the feds indicted McDonnell and his wife for accepting thousands of dollars worth of luxury gifts from a political supporter seeking favors from his administration.

2011: Rep. Paul Ryan, a good-looking GOP boy wonder, was poised to offer a dynamic alternative vision for the role of government. Instead, the Wisconsin congressman turned in a snoozefest—and was upstaged by another House Republican. Minnesota’s Michele Bachmann gave the inaugural “Tea Party Response,” a collection of her normal out-there theories. But everyone was too distracted by technical difficulties—she spent the entire speech staring vacantly off camera—to pay much attention to her words.

2013: Last year, Florida Sen. Marco Rubio’s response gave us the crème de la crème of viral moments. After opening solid, Rubio was making his way through a fine speech until physical discomfort began to set in. He looked visibly uncomfortable, smacking his lips, doubt creeping into his brow. Finally, after speaking for 11 minutes, he caved, the risk of dry mouth too great. He did his best to maintain eye contact with the camera. But his eyes betrayed panic as he lunged offscreen to nab a minute bottle of water and audibly gulp down some relief.

Please enjoy that moment over and over again in full slow-motion glory: