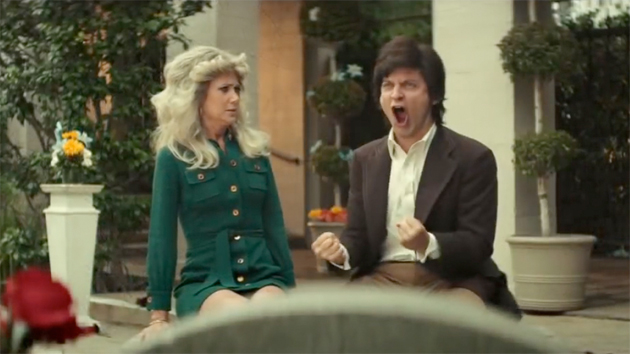 The Spoils of Babylon, a six-part series which premieres Thursday on IFC, is a hilarious send-up of the cheesy, overwrought miniseries of the 1970s and 1980s. (Think The Thorn Birds and Rich Man, Poor Man.) Starring Tobey Maguire as a World War II hero who lusts after his adoptive sister against the backdrop of his family’s oil empire, this Funny or Die-produced mock epic has intentionally low production values and lovably dumb humor. It also has an impressive cast (Tim Robbins, Kristen Wiig, Jessica Alba, Val Kilmer, Michael Sheen, Haley Joel Osment, Will Ferrell, and Carey Mulligan) and a political edge, with nods to modern economic crises.

In one scene, a gathering of mega-rich, cigar-chomping businessmen criticize current US president Franklin D. Roosevelt as a “socialist” and a “Russian Jew!” Jonas Morehouse (played by Robbins), a self-made oilman and Morehouse patriarch, speaks up in FDR’s defense, saying that the wealthy deserve to be taxed into oblivion for their role in causing the Great Depression. In another scene, Jonas presents his adopted son Devon (Maguire) with a new invention—a steam-powered carburetor that gets 200 miles a gallon. It’s an invention that would revolutionize transportation and “destroy the oil industry,” Devon observes in awe.

The show’s creators, Andrew Steele and Matt Piedmont, two veterans of the Saturday Night Live writers room, took cues from the real world for their silly political commentary—the carburetor was inspired by the supposed 1940s water-injected carburetor described in the documentary GasHole, for instance. But they’re not out to make any grand statement with their cheeky love letter to 1980s television.

“In the context of a comedy television show, it’s not supposed to be highly charged political content—it’s just fun pieces of information that we like to throw in there,” Steele, who also serves as Funny or Die‘s creative director, tells Mother Jones. “And it’s nice to play around with big business and corporations and greed since we’ve all been through this ridiculous [financial] crash.”

Funny or Die is certainly no stranger to political satire or comedy with a left-leaning tilt—and neither is Steele. He previously worked with Piedmont and Ferrell on the 2012 Spanish-language comedy Casa de Mi Padre. In the film, Ferrell plays the son of a Mexican rancher who is drawn into a brutal conflict with a powerful drug lord. “That was my take on the drug war,” Steele says.

And with The Spoils of Babylon, we get his perspective on the devastating excesses of modern capitalism—even if we’re not really supposed to take it seriously.