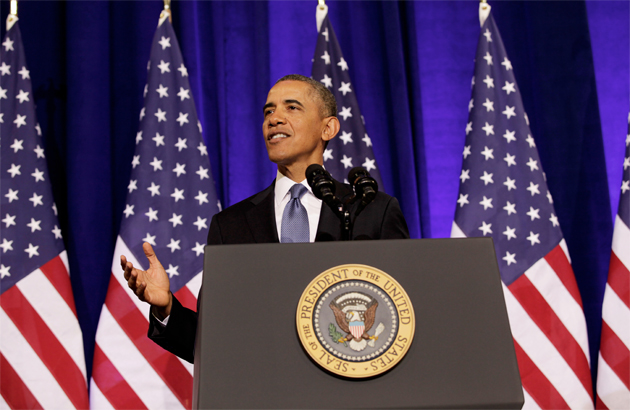 A year ago, President Barack Obama delivered two speeches that sent a clear signal: His second term would be much devoted to a progressive agenda. In his second inaugural speech, he reaffirmed the progressive tradition of the nation, celebrating the value of “collective action,” defending the social safety net, and challenging the tea party’s core message. (Government programs, he said, “do not make us a nation of takers; they free us to take the risks that make this country great.”) The policy matters he raised were left-of-center priorities: protecting Medicaid, Medicare, and Social Security, addressing climate change, ensuring equal pay for women, promoting marriage equality, ending the wars he inherited, securing immigration reform, opposing restrictive voter identification programs, and building infrastructure. Three weeks later, in a State of the Union address, Obama reiterated that he would pursue a distinctly progressive to-do list that included universal preschool, boosting the minimum wage, and passing gun safety legislation in the wake of the horrific massacre at Sandy Hook Elementary School.

Yet the fifth year of his presidency turned out not to be a grand time of progressive achievement, and in the State of the Union speech he will deliver Tuesday night, Obama faces a challenge: how to advance this progressive agenda in a way that it doesn’t seem doomed.

The past year certainly wasn’t a total bust for the president—and the lack of progress wasn’t always his fault. Senate Republicans thwarted modest gun safety measures, despite high levels of approval for the legislation in opinion polls. An immigration reform bill with a path for citizenship for millions living in the shadows passed in the Senate before the House threw up a roadblock. The president forced the House GOPers to back down during the fall’s government shutdown duel, once again positioning the tea partiers as disruptive extremists. Yet the Obamacare website fiasco obliterated any political gains for the White House. With the site now mostly de-glitched and millions signing up for plans, it remains possible that Obamacare will be a net positive for the president and his Democratic comrades by the time of the midterm elections—or, at least, not an albatross around their necks. Meanwhile, the NSA leaks and Syria posed knotty dilemmas for the president that no matter what he did would likely yield no clear political gains.

So after that tough year, Obama has a hard task when it comes to defining the game plan for what’s ahead. As often happens prior to a State of the Union speech, White House operatives leak much of what the president will say. And the word is that he will focus on what he can do via executive action—that is, without the obstructionist Republicans on Capitol Hill—to deal with income inequality, climate change, and other matters of concern to progressives. But at this stage in his presidency—and after a year of disappointments—can he inspire citizens with this we-can’t-wait-for-Congress approach, which he first introduced in 2011? Can he demonstrate that his presidency transcends the often disheartening tussles with GOP obstructionists? And can he stir the Democratic base in preparation for the coming election, in which the Rs have a better chance of going from minority to majority in the Senate than the Ds have in the House?

In politics, context counts for much. And Obama ought to make sure he tells a larger story. In a recent article for MSNBC.com, I noted that Obama, though he won reelection, has still not fully succeeded in defining the national political narrative:

Obama has not mounted a sustained effort to portray Republican sabotage as a chief problem in Washington. No minimum wage hike? No extension of assistance for the long-term unemployed? No closing of special interest corporate loopholes? No budget stability? No jobs bill? No immigration reform? No new gun safety laws? It’s all due to the same thing: the Republican just-say-no agenda.

But Republicans have been telling their own story for years: Barack Obama wants to expand government and this will destroy the economy and the nation we love. And in that horror tale, the to-do list is obvious: stop him any way you can; he is the enemy.

Obama has been limited in his ability to shape the political face-off as bluntly. He does believe that he’s the president of all Americans and needs to be on the watch for opportunities to join with the other side to forge whatever reasonable compromises might be possible. He must govern—and keep the government functioning, especially for those on the lower rungs who rely upon its services. He does not have the luxury his anti-government political opponents have to obstruct and attack freely and unceasingly. He also has to be mindful that criticism of his antagonists does not come across as an attempt to shirk his own responsibility.

There comes a time when pointing a finger is indeed the appropriate response. Obama arrived at the White House as a politician who saw and presented himself as a figure who could rise above petty partisanship and force Washington to produce positive change. He has been reluctant in the years since to be too divisive (despite what his most extreme critics on the right might say). But that hesitation—or discipline—has not won him much since the tea partiers took over the House. So he might consider forcing a correction in the political marketplace by soundly calling out the GOP strategy of sabotage.

That could certainly create a hullabaloo and give Rs a reason for eschewing any cooperation on immigration reform. But the mere repetition of progressive policy aims that he has previously outlined—accompanied by a repeat of his vow to find new ways to take modest executive-branch-only steps toward these goals—may not be sufficient to rev up his party’s faithful and impress onlookers. Obama needs to redefine the political battlefield itself—and he’s not going to get many better opportunities to take a stab at this than his upcoming speech.