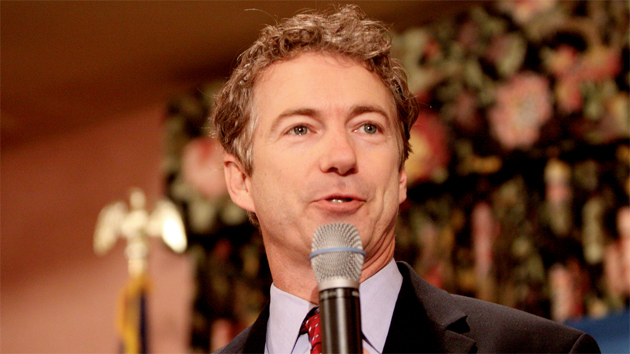 The economy is still sputtering, the war in Afghanistan continues, another debt ceiling showdown looms, the immigration crisis proceeds, Washington is trying to deal with conflict in Syria, Iran, and the Middle East, and what captures the mind of Sen. Rand Paul (R-Ky.)? Bill Clinton’s nearly two-decade-old Oval Office affair with Monica Lewinsky.

On Meet the Press at the end of January, Paul accused Clinton of engaging in “predatory behavior” and taking “advantage of a girl that was 20 years old.” (Lewinsky was 22 years old when she and Clinton hooked up.) And Paul griped, “The media seems to have given President Clinton a pass on this.” (Paul must have slept through much of the 1990s, for the media granted nonstop coverage to the affair and the subsequent investigation and impeachment.)

These were not random remarks; it seemed Paul was waging a one-man campaign to revive an old scandal. Afterward, he told New York Times columnist Maureen Dowd, “In my small town…we would in some ways socially shun somebody that had an inappropriate affair with someone’s daughter or with a babysitter or something like that.” Days later, Paul, during a C-SPAN interview, said that any Democrat who raised campaign money with Bill Clinton ought to return the donations because of Clinton’s dalliance with Lewinsky. In another interview, he called Clinton—who is scheduled to campaign later this month for Alison Lundergan Grimes, the Kentucky Democrat challenging GOP Sen. Mitch McConnell—a repeat “sexual predator” and suggested that Hillary Clinton should return any campaign money gathered with Bill’s help. Members of the politerati immediately seized on the most conventional explanation of Paul’s 1990s obsession: As a potential 2016 GOP presidential candidate, he was taking an early stab at sullying the Clinton brand to do harm to Hillary Clinton’s possible campaign and, perhaps as a side benefit, taint Bill Clinton prior to his joining Grimes on the campaign trail.

Paul’s waving of the Monica flag has been dismissed by pundits on the right and left as odd and irrelevant (though a sign of an unpredictability that could shake up Republican presidential politics in the coming year or two). But Paul’s fixation on Bill Clinton’s tryst with Lewinsky—and his claim that this has a bearing on current political matters—ought to draw attention to his own approach to issues that involve women. His voting record on what might be called women’s issues shows he’s motivated more by libertarian ideology than concern for women contending with abuse or pay inequity. He was one of 22 Republican (and male) senators who voted against reauthorizing the Violence Against Woman Act last year, noting that he believed that programs to counter domestic violence should be funded only at the state level. In 2012, he voted against the Paycheck Fairness Act, which would have provided women with new means to fight pay discrimination in the workplace. He compared that legislation to efforts made by the Politburo in the days of the Soviet Union to control the price of bread. And though as a libertarian he often decries federal encroachment on the rights of states and individuals, he does favor amending the Constitution to criminalize abortion across the country.

There’s nothing too strange about a Republican staking out such positions. But there are questions about Paul and women that extend beyond the policy realm. When GOP candidate Herman Cain was (credibly) accused of sexual harassment, Paul came to his defense and said he was being unfairly maligned. The reason? Cain’s accusers did not come forward and identify themselves publicly. So Paul was apparently willing to give Cain a break—and not call for him to be shunned (as he now does in the case of Bill Clinton). While defending Cain, Paul also noted that he was no fan of women taking legal action against sexual harassment. He told National Review that sexual harassment lawsuits damage workplace relations: “There are people now who hesitate to tell a joke in the workplace, any kind of joke, because it could be interpreted incorrectly.”

Then there’s Aqua Buddha. Four years ago, when Paul was running for the Senate, GQ? published one of the weirdest political stories in years. It recounted an episode from Paul’s college days at Baylor University in Waco, Texas. At the Baptist school, Paul—then known as Randy—joined a secret society called the NoZe Brotherhood that conducted assorted pranks to irk the school administration and that published a satirical newspaper that ran ads for a local strip club on its back page. Their overall aim was to poke fun at the school’s religiosity. In one caper, the group paraded about campus with a large picture of Anita Bryant with a hole cut out of her mouth. (Bryant, a spokeswoman for Florida oranges and a popular figure on the Christian right, had pronounced oral sex a sin.) When Paul was at Baylor, the NoZe outfit was banned by the administration; membership was punishable by expulsion.

GQ reported that one day Paul and a fellow NoZe-er abducted a female student who was on the swim team with Paul. According to the woman, who asked not to be identified, Paul and his pal blindfolded her, tied her up, took her to their apartment, and tried to force her to do bong hits. Next, they drove her to a creek outside Waco and, as the woman put it, “They told me their god was ‘Aqua Buddha’ and that I needed to bow down and worship him.” The woman told GQ that she had not been hurt and that the event had been a “joke” but “kind of sadistic.” Paul’s campaign manager declined to comment on this episode, noting, “During his time at Baylor, Dr. Paul competed on the swim team and was an active member of Young Conservatives of Texas.” After the story appeared, Paul complained he had been the target of an anonymous accusation. (The woman told the Washington Post that she was a clinical psychologist working with former members of the military, some of whom were tea partiers, and that she feared being identified might place her in danger.)

If Paul believes it’s fair game to dredge up the personal past of Bill Clinton, he might prepare for similar vetting—particularly if he decides to run for president. Has he always shunned those with less-than-stellar private lives? Has he ever done anything shun-worthy himself? And will he be able to make Bill Clinton’s old indiscretions more of an issue than his own current stances on policy matters directly affecting women?