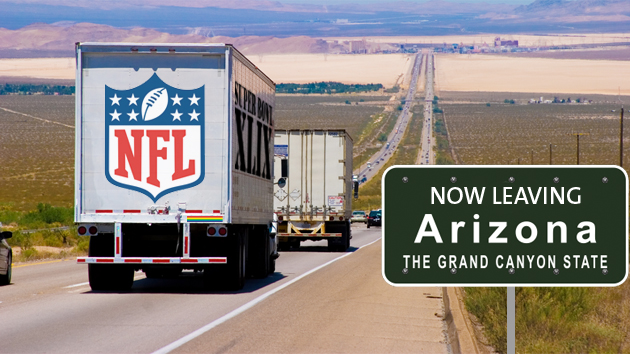 A “religious freedom” bill that would allow discrimination against LGBT residents passed the Arizona Legislature and is currently sitting on Republican Gov. Jan Brewer’s desk. Both of Arizona senators, the state’s chamber of commerce, Apple, and American Airlines have all asked Brewer to veto the bill. Another critic, though, might have the biggest bargaining chip—and has shown the state before that it’s not afraid to use it.

Arizona is set to host next year’s Super Bowl, and the big game’s host committee is not happy:

We share the NFL’s core values which embrace tolerance, diversity, inclusiveness and prohibit discrimination. In addition, a key part of the mission for the Arizona Super Bowl Host Committee is to promote the economic vitality of Arizona. On that matter we have heard loud and clear from our various stakeholders that adoption of this legislation would not only run contrary to that goal but deal a significant blow to the state’s economic growth potential. We do not support this legislation.

An NFL spokesman noted the league’s anti-discrimination policy and said the league was “following the issue in Arizona and will continue to do so should the bill be signed into law.” Would the NFL go so far as to move the country’s biggest sporting event due to a social issue? History suggests that yes, it would.

The 1993 Super Bowl was supposed to be held in Tempe, but the league backpedaled in the midst of a controversy over celebrating Martin Luther King Jr. Day. Then-Gov. Evan Mecham had abolished the state’s MLK holiday, arguing it had been illegally created through executive order. A public vote on the holiday was scheduled for 1990, and players and NFL officials began to express their displeasure over playing the Super Bowl in a state that wouldn’t honor King. “If there is a smear on the Martin Luther King holiday of any kind, I would personally lead the effort to rescind the Super Bowl,” said then-Philadelphia Eagles owner Norman Braman, who was head of the Super Bowl site selection committee. “We wouldn’t go there. How could anybody in his right mind go to play there?”

NFL officials made it clear that the state would not keep the Super Bowl if voters turned down the holiday, a move that infuriated Mecham, who called it “a shameful and disgusting attempt to blackmail this entire state.” (Mecham, it should be noted, had earlier been impeached and removed from office on charges of obstruction of justice and misuse of government funds.) Arizona voters turned down MLK Day, and then-NFL Commissioner Paul Tagliabue took the Super Bowl away less than 12 hours later.

“I don’t believe playing Super Bowl XXVII in Arizona is in the best interest of the NFL,” Tagliabue said at the time. “I will recommend to NFL clubs that this Super Bowl be played elsewhere. I am confident they will follow the recommendation. Arizona can continue its political debate without the Super Bowl as a factor.”

League officials said Arizona could host the big game in 1996 if the state approved the holiday by then. Voters complied, approving it in 1992.

Given that the NFL is expecting its first openly gay player next season, and considering anonymous team officials’ comments on the matter, league administrators are likely hyperaware of the kind of publicity an Arizona-based championship would get if the state’s anti-gay bill is signed into law. Perhaps most importantly, the state would lose out on hundreds of millions of dollars if the big game is moved elsewhere—just as it did in 1993. Multiple outlets reported Tuesday that Brewer was likely to veto the bill. As one source told NBC News, “She doesn’t want to take any actions that could jeopardize the economic momentum we’ve seen here in Arizona.”