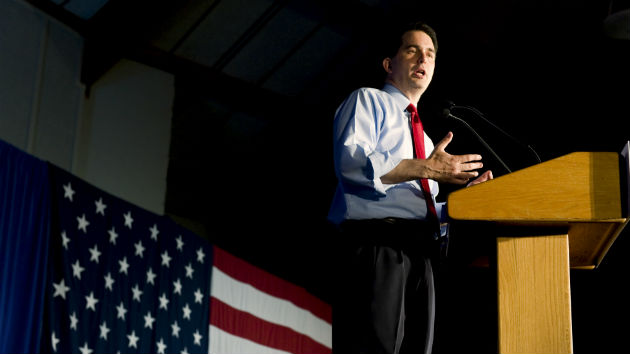 This week, the media got the chance to pore over more than 27,000 pages of previously unreleased emails and other documents gathered during a three-year secret investigation of Wisconsin Gov. Scott Walker’s staff when he was executive of Milwaukee County. That secret probe—what Wisconsin law enforcement calls a “John Doe” investigation—resulted in charges against three former aides to Walker, a major campaign donor, and a Walker appointee. The John Doe probe figured prominently in Democrats’ attacks on Walker during his June 2012 recall election that the governor handily won. Walker himself never faced any charges.

The recently released emails shed new light on the activities of Walker and his aides. Walker had insisted that staffers in his county executive office had been prohibited from doing political work on county time, yet these records show the opposite was true. The future governor and his underlings set up a private WiFi network to communicate with staff on his 2010 gubernatorial campaign, and county staffers used private laptops so that their campaign-related work wouldn’t appear on their county computers. The emails also show the degree to which Walker’s staff (whose salaries were funded by taxpayers) worked to get him elected governor while on the county clock. As Mary Bottari of PRWatch notes, Kelly Rindfleisch, a former Walker aide who was convicted of campaigning on county time, sent and received a whopping 3,486 emails from representatives of Friends of Scott Walker, most during normal work hours. (Walker, through his spokesman, declined to comment about the emails.)

State and national Democrats want the public to see these emails as part of a Chris Christie-style scandal. But there’s a big difference: This case is closed—and it has been since March 2013. So while the emails may result in some unflattering stories and uncomfortable questions for Walker, especially if he later runs for president, there’s nothing serious (read: legal) to worry Walker. Christie, on the other hand, faces two active probes of Bridgegate and related matters—one mounted by a legislative committee, the other by a US attorney—that could drag on for months, if not years.

But there is an investigation that should keep Walker up at night: a second John Doe investigation reportedly focused on his 2012 recall campaign. (After Walker targeted public-sector unions following his 2010 election as governor, labor and its allies launched a petition drive to throw Walker out of office via recall election.) John Doe probes are conducted in secret so the public can’t know all the details, but leaked documents suggest investigators are looking at possible illegal coordination between Walker’s recall campaign and independent groups that spent millions of dollars to keep him in office. Here’s how the progressive Center for Media and Democracy wrote about the investigation recently:

The John Doe probe began in August of 2012 and is examining possible “illegal campaign coordination between (name redacted), a campaign committee, and certain special interest groups,” according to an unsealed filing in the case. Sources told the Milwaukee Journal Sentinel the redacted committee is the Walker campaign, Friends of Scott Walker. Campaign filings show that Walker spent $86,000 on legal fees in the second half of 2013.

A John Doe is similar to a grand jury investigation, but in front of a judge rather than a jury, and is conducted under strict secrecy orders. Wisconsin’s 4th Circuit Court of Appeals unsealed some documents last week as it rejected a challenge to the probe filed by three of the unnamed “special interest groups” that had received subpoenas in the investigation and issued a ruling allowing the investigation to move forward.

The special interest groups under investigation include Wisconsin Club for Growth, which is led by a top Walker advisor and friend, R.J. Johnson, and which spent at least $9.1 million on “issue ads” supporting Walker and legislative Republicans during the 2011 and 2012 recall elections. Another group is Citizens for a Strong America, which was entirely funded by Wisconsin Club for Growth in 2011 and 2012 and acted as a conduit for funding other groups that spent on election issue ads; CSA’s president is John Connors, who previously worked for David Koch’s Americans for Prosperity and is part of the leadership at the Franklin Center for Government and Public Integrity (publishers of Watchdog.org and Wisconsin Reporter). Other groups reportedly receiving subpoenas include AFP, Wisconsin Manufacturers and Commerce, and the Republican Governors Association.

Unlike the first John Doe probe, this newer one seems to have Walker’s political operation in its sights. This ought to have Walker and his aides far more concerned than some old emails from his Milwaukee County days.