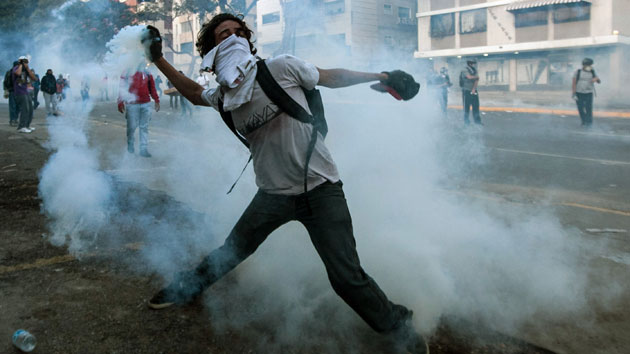 Student protesters have filled the streets of many Venezuelan cities for the last two weeks to express their dissatisfaction with the socialist government, the deteriorating economy, and the violence that plagues the country. In the past few days the situation has worsened, as crackdowns from the National Guard and attacks from paramilitary groups have left at least six people dead so far.

Who are the protesters? Venezuela’s opposition party is unified by the desire to end the reign of “chavismo,” the socialist system devised by Hugo Chávez, and continued, albeit less handily, by his successor, Nicolás Maduro. The emergent leader of the protests is Leopoldo López, a Harvard-educated descendent of Simón Bolívar, and the former mayor of a Caracas municipality. He turned himself over to government forces after Maduro publicly demanded his arrest; López has called for more protests from prison. Also prominent in the opposition is María Corina Machado, a congresswoman in the National Assembly.

The protests started in the western border city of San Cristóbal, where students took to the streets on February 2 to express discontent with rampant crime. The forceful reaction of the authorities prompted other students in other cities to protest in solidarity. The protesters are largely from the middle class.

Maduro’s leadership has proved ineffective, and the economic policies he inherited from Chávez, including the nationalization of many industries, have wreaked havoc on the Venezuelan economy; these days, people are struggling to find the bare necessities. The scarcity index has reached an astonishing 28 percent, meaning that toilet paper, flour, and other basics simply might not be in stock. Maduro has threatened to raise gas prices, which were kept artificially low for 15 years because increasing them is politically disastrous. Inflation has more than doubled in the past year. Finally, the insanely high homicide rate, 39 deaths per 100,000 people in 2013, has many Venezuelans fed up with the status quo.

How is the government responding? Maduro, who narrowly beat opposition candidate Henrique Capriles in the election after Chávez’s March 2013 death, has swiftly cracked down on broadcast media coverage of the protests. The Colombian channel NTN24, which was covering the violence in the streets, has been taken off the air. Maduro expelled the CNN team today by revoking their press credentials.

Reports of paramilitary groups (known as colectivos), riding around on motorcycles and terrorizing protesters and civilians “tend to be exaggerated,” said David Smilde, a University of Georgia sociologist and senior fellow at the Washington Office on Latin America who returned from Venezuela yesterday. Though it is surely happening (with low quality video evidence to back it up), “that phenomenon appeals to the middle class’s worst nightmare of having these armed poor people on motorcycles.”

“The bigger problem,” Smilde continued, “is actually the government troops. The National Guard is the one that is doing the most violence, shooting on protesters and buildings. They tend to be very unprofessional. They don’t think in terms of civilian policing, so they will often fire on people who are fleeing. These are people who are 20 to 22 years old and oftentimes they end up being violent. I don’t think it’s necessarily state policy to repress voters. But the state could definitely make it clearer that there should be no violence.”

In a dramatic video, armed men reportedly from SEBIN, the Venezuelan intelligence agency, stormed the opposition party HQ. Reports have also surfaced of detainees being beaten, and Human Rights Watch has called for the international community to condemn the violence against protesters and journalists.

How serious is the crisis? While some residents of Venezuela’s biggest cities, like Caracas, San Cristóbal, Mérida, Valencia, and Maracaibo decry the “war zone” in the streets, for many in Venezuela, life continues as normal. “From the outside it always looks like the whole country’s in flames, but of course life goes on and most things are up and running,” Smilde said.

However, San Cristóbal appears to be headed toward more dramatic confrontation. The Andean college town of 650,000, situated near the border with Colombia, has been heavily barricaded by opposition protesters. The government has cut off internet service to the city. Government paratroopers are on the way. And the opposition isn’t backing down, said Juan Nagel, editor of the blog Caracas Chronicles, during a phone interview with Mother Jones.

What’s going to happen next? So far it seems like the protests have not achieved support from the poor, who long have identified as chavistas. As Capriles, still the opposition’s biggest name, told The Economist, “For the protests to be effective, they must include the poor.”

Capriles has urged protesters to gather tomorrow en masse, and march peacefully. From prison, López passed a note to his wife, calling for more protests, a message that rapidly spread through social networks. “Tomorrow will tell what the future’s going to be,” Smilde said. If the turnout is huge and violence breaks out, Venezuela may be headed for prolonged unrest. If not, he said, things may “fizzle out.”

UPDATE, Saturday, February 22, 6:30 p.m. ET (Benjy Hansen-Bundy): Hundreds of thousands of protesters took to the streets today, some to protest Maduro’s government, others to support it. The AFP reported at least 50,000 opposition protesters marching in the streets of the Sucre neighborhood of Caracas. A pro-government rally, also in the capital, marched “against fascism.” Though today’s protests were largely peaceful, Al Jazeera has reported at least eight deaths and more than 100 injuries since the protests began on February 2.

UPDATE 2, Sunday, February 23, 1:31 p.m. ET (Benjy Hansen-Bundy): One day after he rescinded a CNN reporting team’s press credentials, President Maduro said on Friday that they can return to Venezuela. Also on Friday, during a late night news conference, Maduro invited Obama to begin negotiations and settle differences, though his language wasn’t particularly amicable. Relations between the US and Venezuela have been frosty under Maduro and under Chávez before him (Chávez once called George W. Bush a “donkey”). Maduro’s invitation for talks came just days after he kicked three American diplomats out of the country.

UPDATE 3, Monday, February 24, 1 p.m. ET (Benjy Hansen-Bundy): Protesters took to the streets again Monday morning, setting up roadblocks in major cities and banging on pots and pans. The death toll has reached as high as 12, Reuters reported; though the exact number, and who is to blame, are both disputed. Parts of several cities in the western Táchira state, including San Cristóbal, are heavily barricaded, inaccessible to government forces, and apparently under the control of the student demonstrators. Trash and branches burn in the streets of higher income neighborhoods, where the protests tend to be concentrated. The governor of Táchira, José Vielma, a member of the ruling Socialist Party, has criticized Maduro’s management of the crisis. Criticism from within the party is irregular. In a radio interview, Vielma said that the students should have the right to protest peacefully, and that López should be freed. Capriles and Maduro are scheduled to meet today at a routine gathering of governors and mayors; some observers hope this will provide the opportunity to ease tension between the rival parties.

UPDATE 4, Thursday, March 6, 3 p.m. ET (Benjy Hansen-Bundy): The anniversary of Hugo Chávez’s death yesterday was marked by disparate scenes: continued violence in the streets as hardcore student protesters and militant members of the opposition barricaded themselves against government forces, and large-scale pro-government rallies, with all the pomp and fanfare of state sponsorship. At least 20 people have died in the clashes. The US House of Representatives condemned the crackdown by Maduro’s government in a nonbinding resolution endorsed by 393 votes, with just Rep. Thomas Massie (R-KY) in dissent. (The measure “deplores.…the inexcusable violence perpetrated against opposition leaders and protesters.”)

Last week, Sens. Marco Rubio (R-Fla.) and Bob Menendez (D-N.J.) proposed sanctions against individuals in the Venezuelan government with assets in the United States. They made no suggestion of slowing oil imports from Venezuela, which provides the fourth-largest supply of foreign crude to the US. Despite continued violence, and comments by American celebrities, some observers insist that the situation in Venezuela is different from that in Ukraine, citing evidence that the protests have failed to gain broad-based support among the populous lower classes. 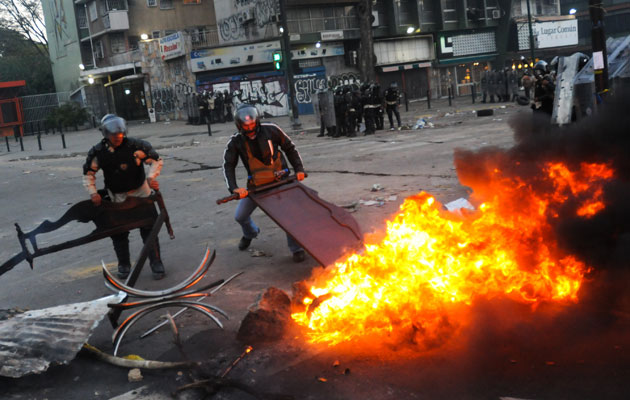 Demonstrators clash with the National Guard on March 6. Manaure Quintero/Xinhua/ZUMA 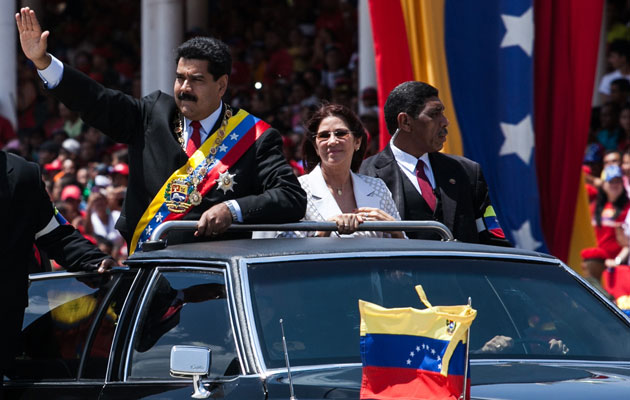 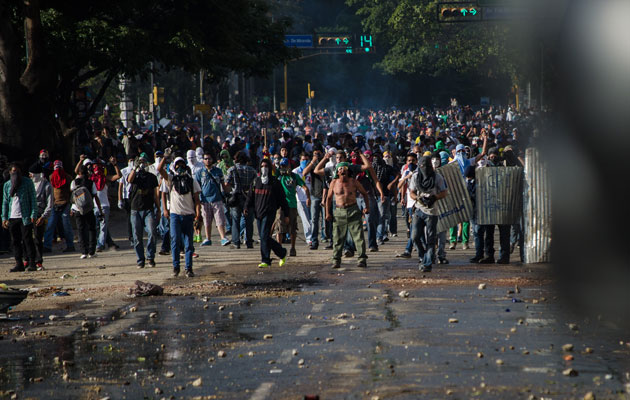 A protest in Caracas on March 4 Carlos Becerra/NurPhoto/ZUMA 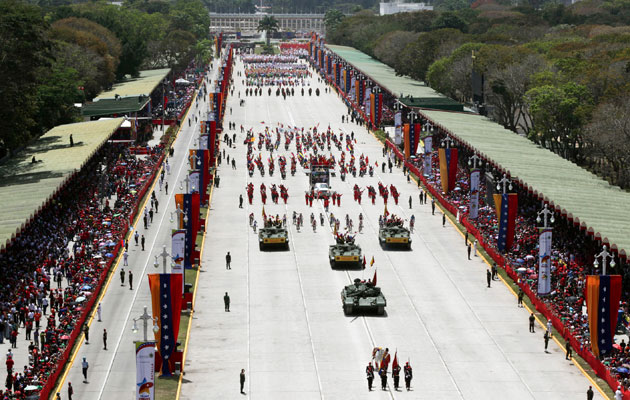 The state-sponsored parade on March 5 Avn/Xinhua/ZUMA 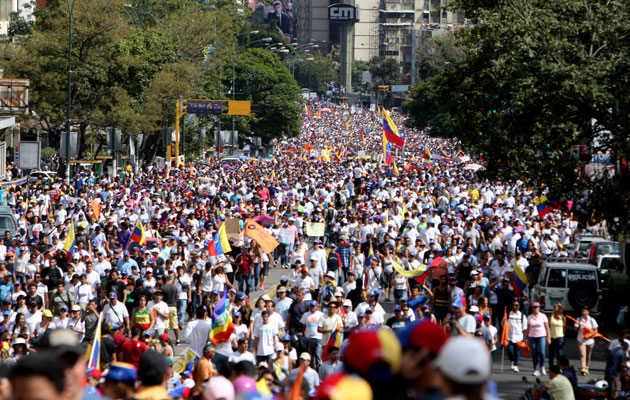 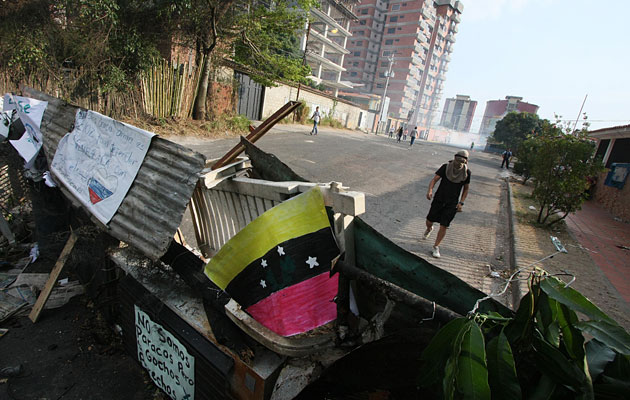 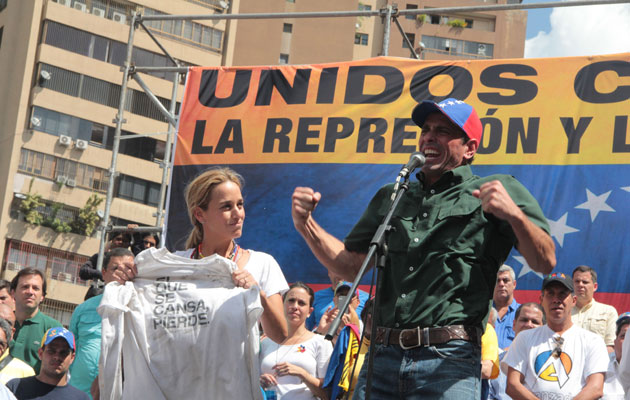 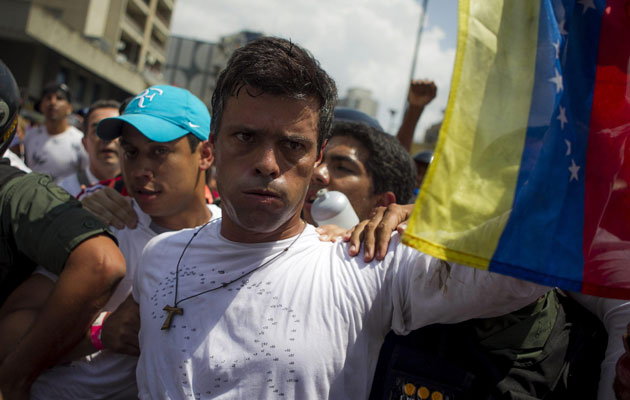 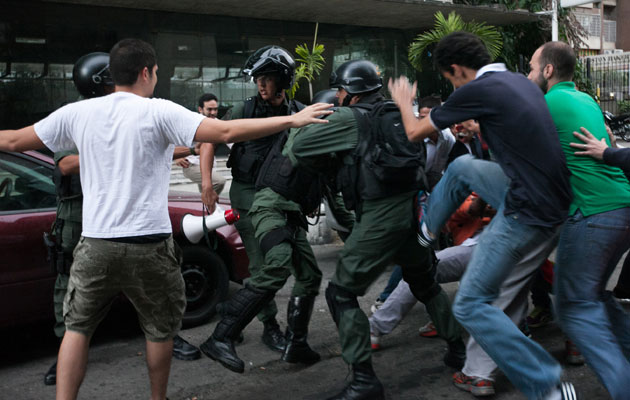 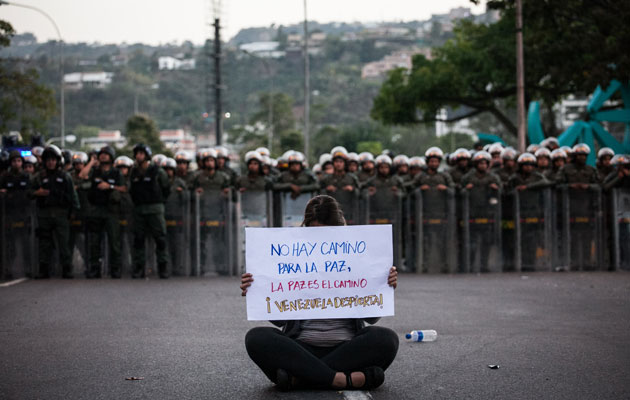 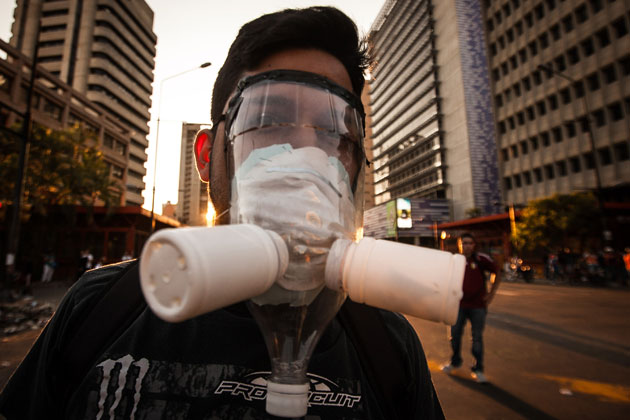 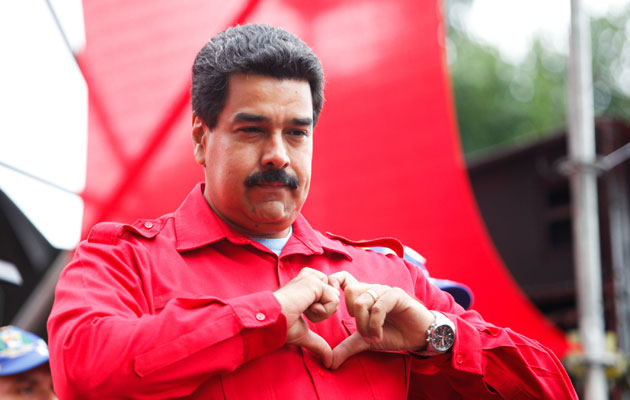