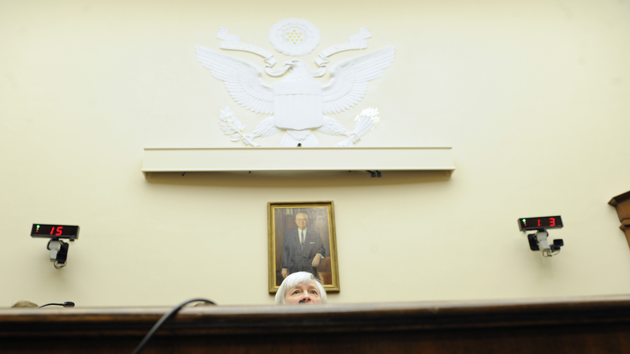 Between 2007 and 2009, the Federal Reserve—the US central bank tasked with regulating unemployment and inflation—handed out an unprecedented $20 trillion in super-low interest loans to failing Wall Street banks. The 2010 Dodd-Frank financial reform law required the Fed to restrict its emergency lending powers so that too-big-to-fail banks don’t expect the central bank to dole out easy money again in the event of another financial crisis. The Fed waited over three years to craft regulations to comply with the Dodd-Frank provision, and now it has finally drafted rules to limit its bailout powers, financial reform advocates say the restrictions are far too weak.

Dodd-Frank says that any future emergency lending by the Fed can’t be used to bail out insolvent firms, has to be backed by good collateral, and can’t go to a single institution. The law also imposes time limits on the Fed’s emergency loans to banks. The draft rule that the Federal Reserve released in late December (before current Fed chair Janet Yellen was confirmed) misses the mark on all these requirements, Marcus Stanley, the policy director for the advocacy group Americans for Financial Reform (AFR) said in a letter to the Fed this week, adding that though the rule “complies with the letter of the law, it does not fulfill the spirit of the Congressional mandate,” which intended to significantly restrict the Fed’s bailout abilities.

“The rule mostly reiterates the language of [Dodd-Frank],” Stanley says. “And the drafters take advantage of every opportunity to interpret the statute in ways that minimize limits on emergency lending authority.”

Instead of limiting the Fed’s emergency lending powers to temporary cash assistance as it is supposed to, the draft rule imposes no clear time limit on how long a big bank may remain dependent on Fed largesse. And the draft regulation defines “solvency” with far too broad a brush, according to AFR. The proposed rule does not require the Fed to assess if a potential borrower’s liabilities exceed the value of its assets.

While the emergency lending rule would ban loans to a single institution, it would still allow the creation of loan programs that lend to, say, three or four of the largest banks, while allowing smaller banks to flounder.

The Fed’s draft emergency lending rule does not even set an interest rate at which loans will be extended, a provision that would help to limit the “moral hazard” of easy money, AFR notes. And the rule is unclear as to how it would value borrowers’ collateral.

The Fed declined to comment. But last year, former Fed chairman Ben Bernanke dismissed concerns that the central bank had not yet drafted a rule limiting its emergency lending powers, insisting that the language in the Dodd-Frank law was sufficient. “I think that [Dodd-Frank] is very clear about what we can and cannot do. And I don’t think that the absence of a formal rule would allow us to do something which the law prohibits,” including bailing out an individual firm, or lending to an insolvent bank, he said at a House hearing in July.

The Fed is currently accepting public comment on its emergency lending rule, so it is possible that reformers may win some victories before a final rule is put in place. Though the lobbying clout of the financial industry vastly outweighs that of pro-reform groups.

Before the Fed finally drafted its emergency lending rules, financial reformers said the central bank was likely dragging its feet because it didn’t want to cede some of its authority over the financial world. This latest lukewarm effort to rein in its bailout abilities makes it seem like that may be the case.

“There are two ways to keep the economy on an even keel,” AFR’s Stanley told me last July. “Through clear, transparent rules that treat everyone the same—which is pretty challenging, and involves taking on a lot of interests.” Or, he says, “you get to create a whole bunch of money out of nothing and you can hand it out wherever the problem is… It’s easier to have this magic power.”