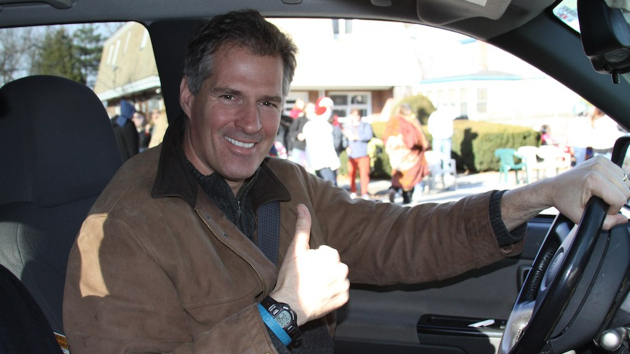 Scott Brown, the former Republican senator from Massachusetts who Elizabeth Warren defeated in 2012, has decided that he wants his old job back. Well, not exactly his old job. Late last year Brown sold his Massachusetts home, packed up his belongings and inched north across the border to New Hampshire. He’s been making feints toward running for awhile and on Friday made that speculation semi-official, forming an exploratory committee to challenge Sen. Jeanne Shaheen’s (D-N.H.) in 2014. The last time he ran for Senate, Brown agreed to a pact with Warren that largely prevented outside campaign spending but, based on initial comments he made over the weekend, Brown appears ready to embrace the wild world of super PACs and dark money nonprofits in order to reclaim his old post at the Capitol.

Warren and Brown knew their 2012 campaign would be a hotbed of political excitement. She was a favorite of liberal activists, a YouTube sensation adored by the Netroots. Brown was the Republican heartthrob who claimed Ted Kennedy’s old seat and almost squashed Obamacare. Republican commentators immediately began dreaming of him as a future presidential prospect after he won a special election to the Senate in 2010. Their match-up was sure to be a magnet for outside political spending, but neither campaign wanted to lose control of their messaging. The two sides crafted a deal: they would both publicly disavow campaign ads from outside groups and urge those organizations to save their money. Should any group go against their wishes, Brown or Warren would have to donate 50 percent of the money spent on the ad buy to a charity of their opponent’s choice. They called their deal “The People’s Pledge.” Neither candidate hurt for money in that race—they collectively spent over $81 million in the most expensive Senate race to-date. But the pledge did the trick; outside spending played a minor role in their campaign.

Shaheen sent a letter to Brown on Saturday offering to play by those same rules in 2014. “I believe it limited the influence of outside groups and allowed the people’s voices to be heard,” her letter said urging her new opponent to once again sign “The People’s Pledge.” But Brown scoffed at the potential for another deal. “It’s hard to view Jeanne Shaheen’s actions as anything other than hypocritical and self-serving,” Brown responded in a statement. “The people of New Hampshire can see through the Washington-style game she is playing.”

Why the change of heart? Perhaps it’s as simple as a sour taste for the pledge after Brown lost in 2012. But more likely his newfound acceptance of outside groups owes to the circumstances of a 2014 campaign. Brown had nothing to gain by embracing dark money in 2012. Anything conservatives directed his way was bound to be matched by liberals who were devoted to getting Warren into office. That likely won’t be the case against Shaheen. Her name carries less cachet among liberals, while Brown can count on the conservative base rallying around the cause. In light of Brown’s announcement, the Karl Rove founded American Crossroads has bought $650,000 in ads attacking Shaheen that are set to run this week. Earlier in the year, the Koch-backed Americans for Prosperity poured $700,000 into New Hampshire on ads attacking Shaheen for her support of Obamacare. With allies like these, Brown has no reason to make any sort of pledge to rely on funding from the people.