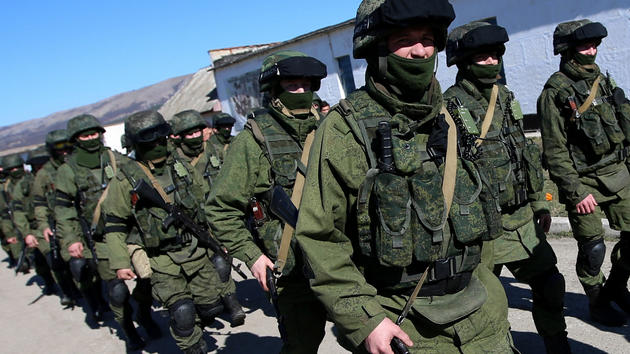 Update: On Tuesday, President Vladimir Putin harshly criticized Ukraine’s new leadership, calling the crisis an “unconstitutional coup.” He said that Russia is not planning to annex Crimea and he would leave it up to citizens in the region to determine their future. He did not take the option of using military force off the table and said it would be used as “a last resort.”

Last month, the world’s eyes turned to Russia to see if President Vladimir Putin could manage to get hotel showers ready in time for the Sochi Olympics. Just a few weeks later, Putin once again has the international community waiting in suspense, but for a very different reason. The world is waiting to find out if Russia will launch a full-scale armed assault on Ukraine. After months of anti-government protests in Ukraine—sparked by President Viktor Yanukovych’s rejection of a European Union trade deal—the rubber-stamp Russian parliament authorized Putin to send military forces into Ukraine on March 1. The action is reportedly being undertaken to protect the Russian population in the Crimean Peninsula, where, conveniently, Russia also has strong economic and political interests.

As Putin shoots spitballs into the faces of Western leaders—who, remembering the Cold War, aren’t expected to take much action in response to the crisis—Ukraine is mobilizing forces, preparing to take on a military that is far better equipped than its own. The Obama administration has declared that it is prepared to enact sanctions and come up with other consequences if Russia continues to move forward; European Union leaders are having an emergency summit Thursday. Here’s what you need to know about the ongoing crisis, in 26 numbers:

6,000: The number of Russian ground and naval forces that have entered the Crimean Peninsula of Ukraine, according to US officials. (On Monday, Ukrainian officials told the UN Security Council that the number was higher, reaching 16,000.)

500,000: The number of anti-government protesters who flooded Ukraine’s capital, Kiev, in December to demand the ousting of Yanukovych. Anti-government protests have since been held in the cities of Dnepropetrovsk, Odessa?, and Kharkiv?, according to the Washington Post. Thousands of protesters marched in Moscow on Sunday in support of Russian incursion, and there have also allegedly been pro-Russia protests in many Ukrainian cities. (According to the New York Times, some of these may be staged by Russian “protest tourists” and Kiev officials say that Moscow is behind pro-Russia demonstrations in Ukraine.)

?13: The number of websites blocked by the Russian government because they had links to the Ukrainian anti-government protest movement. Russia’s internet monitoring agency accused them of “encouraging terrorist activity.”

$115,000: The amount Yanukovych allegedly spent on a statue of a wild boar.

Less than $500: The average monthly income in Ukraine.

24 percent: The percentage of people across Ukraine who report Russian as their native language. In Crimea, that number rises to about 60 percent. According to the Brookings Institution, most Ukrainians speak and understand both Ukrainian and Russian.

845,000: The number of total armed forces in Russia. Ukraine has 129,950 troops, according to the International Institute for Strategic Studies (IISS) and the BBC, which notes that there is no chance of NATO assisting Ukraine militarily.

40: The age cap for men in Ukraine who have been called to defend the country as part of Ukraine’s universal male conscription. According to Reuters, Ukraine will “struggle to find extra guns or uniforms for many of them.” (Ukrainian women don’t have the same obligation to serve.)

80 percent: The percentage of Russian gas exports to Europe that travel through Ukraine. Europe relies on Russia to supply 40 percent of its imported fuel. A regional expert told the New York Times that the primary gas pipelines passing through Ukraine supply Germany, Austria, and Italy. The global price of crude oil has risen 2 percent since the crisis began.

$60 billion: About the amount that Russian companies lost in a day after the Moscow stock market fell 10.8 percent on Monday, in wake of the crisis. The Central Bank of Russia has sold over $10 billion in US dollar reserves in order to revive the value of the Russian ruble.

37: The number of rubles needed to match the US dollar on Monday as the currency nose-dived in wake of the crisis.

8,500: The number of nuclear weapons that Russia has, according to a January 2014 report put out by the Ploughshares Fund. The United States has 7,700 nuclear weapons.

0: US lawmakers who have suggested the United States send troops into Ukraine.