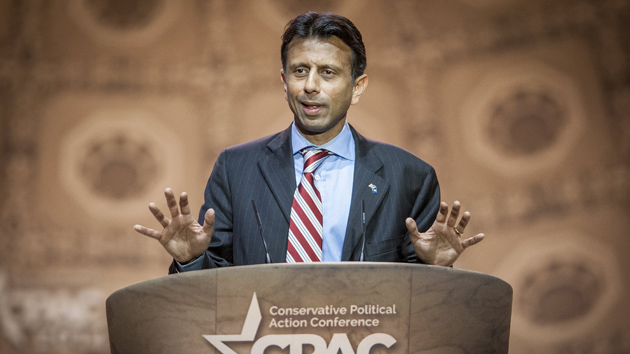 Louisiana Gov. Bobby Jindal made another effort to jump back into the upper tier of 2016 Republican presidential wannabes on Wednesday, releasing a 26-page plan to repeal the Affordable Care Act and replace it with…something else. Jindal’s plan includes things like block grants for Medicaid, an elimination of the employer subsidy for insurance, and the ability to purchase insurance across state lines—basically the same things conservatives have been pushing for years. (Wisconsin Rep. Paul Ryan’s 2015 budget, unveiled one day earlier, also calls for block grants.) As I reported in the most recent issue of Mother Jones, it’s only the most recent in a string of efforts by Jindal to elevate his sagging national profile to its previous heights.

But while he was pushing a hypothetical agenda for his hypothetical presidency, things weren’t going so well in Louisiana:

Louisiana’s House Education Committee voted down legislation that sought to scrap the Common Core education standards and replace them with a not-yet-developed set of academic benchmarks and assessments. The committee’s vote was 12-7.

Gov. Bobby Jindal submitted a green card—indicating support—for [State Rep. Brett] Geymann’s legislation to the House Education Committee, after several weeks of being circumspect about the his views on Common Core. But no one from Jindal’s staff testified on the bill and his spokesmen did not respond to media requests for information about why he backed Geymann’s legislation.

Jindal originally supported the implementation of the Common Core standards, a set of defacto national math and English standards approved by 46 states in 2009. But the standards became a lightning rod for conservative activists, who considered it a government takeover of local schools (or worse). So when the backlash came to Louisiana last year, he changed his tune. Sort of. Jindal argued that Louisiana shouldn’t take orders from Washington, and after a long period of indecision, quietly signaled his support for Geymann’s bill, which would have put the state’s tests on hold and form a 32-person committee for further study. It’s not quite hitting control-z on the entire program, but it would certainly be a step away from the original plan. But that attempt at damage control is dead for now, and so instead of being able to tell voters about how he reined in Common Core, Jindal is stuck with it.

That might not be on the 2016 radar yet, but given how despised the Core is among grassroots voters in Iowa, Florida, and South Carolina, it’s potentially a much bigger deal than a boilerplate white paper.